Nagarkot - Himalaya Dawn - Back to Delhi and home 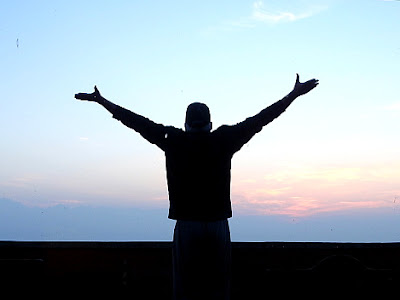 Greeting the dawn from our terrace

"I got a pipe and a few blankets and sat for two hours at the window, and saw the sun drive away the veiling gray and touch up the snow-peaks one after another with pale pink splashes and delicate washes of gold, and finally flood the whole mighty convulsion of snow-mountains with a deluge of rich splendors. Kinchinjunga's peak was but fitfully visible, but in the between times it was vividly clear against the sky -- away up there in the blue dome more than 28,000 feet above sea level -- the loftiest land I had ever seen, by 12,000 feet or more. It was 45 miles away. Mount Everest is a thousand feet higher, but it was not a part of that sea of mountains piled up there before me, so I did not see it; but I did not care, because I think that mountains that are as high as that are disagreeable." - Mark Twain - Following the Equator

"Feb 26- Nagarkot. Situated at an elevation of 2175 meters, it provides a grandstand panoramic view of the Himalayas. You can see five of the worlds 10 tallest mountains — Everest 8848 m, Lhotse 8516 m, Makalu 8463 m and Manaslu 8163 m and many other lesser summits.
Nagarkot — Delhi - International Flight. Check out of the hotel and board the late morning flight to Delhi. Arrive at Delhi and you are greeted at the airport by our travel facilitator and driver. You can use the remaining few hours you have to do some last minute sightseeing or shopping. We can make suggestions based on your interests. Your vehicle and driver stay with you until your (usually late evening) assisted check in at the airport. Our services end at Delhi airport." 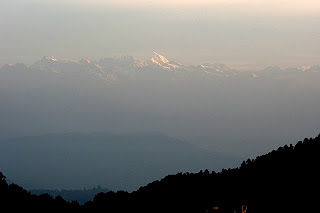 We had an early wake-up call to greet the dawn. Admittedly, the dawn view of the Himalayas was spectacular. 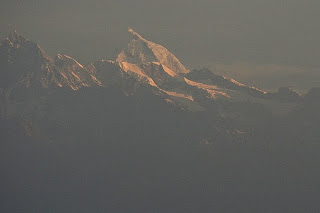 Was it worth adding eight hours of driving on one of the worlds most dangerous roads? I remain unconvinced. There were a few other problems with Hotel Club Himalaya. The food was good and the staff tried hard, but neither the internet nor the tv worked - probably having to do with the frequent power outages in Kathmandu. Shortly after the sunrise vista, we are packed and begin the long journey home. 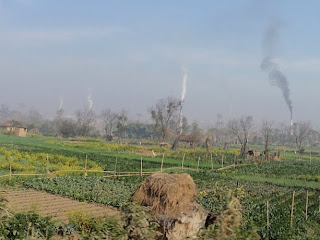 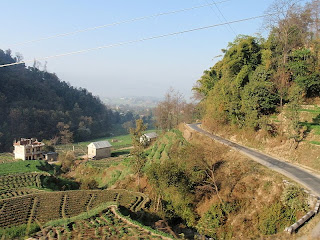 After another drive through the terraced fields and brick kiln smokestacks of Kathmandu valley, Surendra and Hari see us off at the airport. I can't say enough about these guys, or any of the guides and drivers on this tour. They were all top notch. 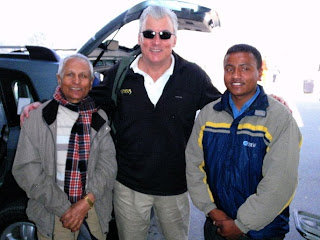 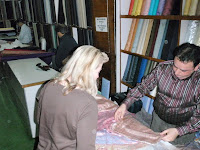 We had a long a layover in Delhi - enough time to come full circle on this trip. We started with a shopping trip to the Kahn Market over three weeks before. Sigrid wanted to go back to the Delhi Cloth House to pick up another pashmina or two. Mission accomplished, and we still had time to relax for a few hours in a day room before the final flights home. 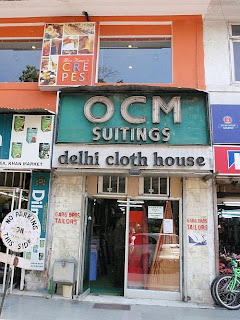 Kahn Market Redux
Since we could not get on the internet in the last 72 hours before leaving, there was no hope of an upgrade, and nothing to do but grin and bear it for the next 24 hours of travel time. The less said about it the better, but the trip home was not fun, and included a mad dash between terminals in Newark to barely make our connecting flight home to San Francisco. It was great trip while in India and Nepal, but getting there and back was brutal. We were glad to get home.

[Editor's note: As usual in my blog journals of our travel adventures, the journal is incomplete. There are several dates missing with pictures to be posted and stories yet to be told throughout, but the gaps are particularly egregious in the tour through Rajahstan. If interested - keep checking back. It will get done eventually. Really.]
Posted by mw at 1:25 PM