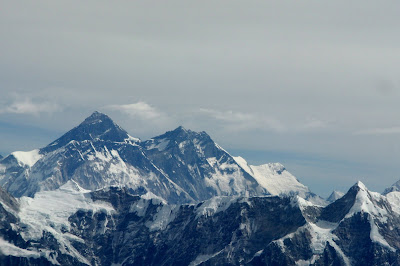 "Feb 22 - Kathmandu. You have the option of experiencing the Everest flight this morning. Take a tour of Kathmandu city. Visit 'Kumari` the Living Goddess, Kasthamandap, the Big Bell, Kal Bharab etc. Visit the Swayambhunath temple, Katmandu’s oldest and best known religious monument. With a history that goes back a least 1500 years for the location, this ancient Stupa is world renown and is visible from miles (from all over the Kathmandu Valley).
Afternoon - Take a tour of `Patan City`, one of the three queen cities of the valley. Patan is the city of fine arts, and we visit Durbar Square, Krishna Mandir, and Mahavihar, the Golden Temple of Lord Buddha, built in the 12th century. Also visit the Tibetan centre."

Today's itinerary took a major one-two punch from the weather and local politics. The general strike called by the Monarchist Party shuttered many businesses and kept traffic off the street. Major intersections were filled with enthusiastic party members intending to enforce the strike, and a large show of force by the police was in evidence, intending to keep a lid on the proceedings.

This was all a bit disconcerting,. As our guide Surrendra put it "The car is not stone proof." Anticipating the strike, Surrendra had taken us for a tour of the Swayambhunath Stupa the night before. This morning we opted for the Everest flyby, which still meant a dawn drive from the hotel to the airport, while the striker supporters were sleeping off the previous night festivities. Surrendra and Hari came up with a solution to the strike problem: 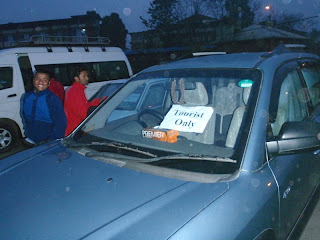 Yes - that's it. The note taped on the windshield saying "Tourist Only". Frankly, I was a little dubious, but apparently the one thing all Nepalese political factions agree on, is that tourists are necessary for the economy.

We get to the airport without incident, and in record time through the empty streets. Fog meant a delay of several hours at the terminal, but the flight was worth the wait. Once we cleared the Kathmandu smog layer and low-lying clouds, the Himalayas emerged in all their splendor. 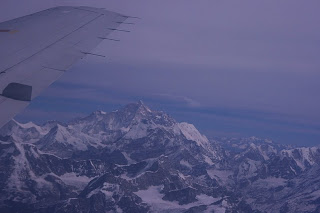 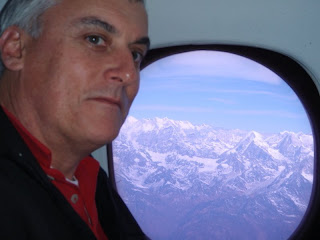 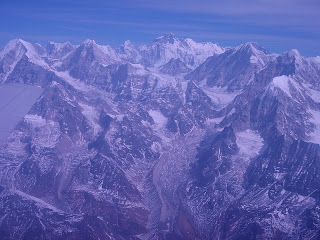 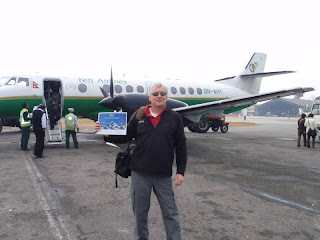 Back on the ground we put Hari's strike repellent sign to the test as we drive back to the hotel for lunch.

It seemed to work. Lots of people on the street looking in the window to confirm there were indeed tourist on board.

After lunch we blew off the rest of the itinerary, took a back door route out of town and climbed the nearby hills to the Kopan Monastery. This monastery caters to Western spiritual seekers, and quite a few were in evidence meditating near the shrines, reading in the library, and interacting with the monks. We learned from Surrendra that Bill Clinton is the favorite American presidient for all Nepalese, and found evidence of this nestled among the thousands of books on Buddhist thought in the Monastery library: 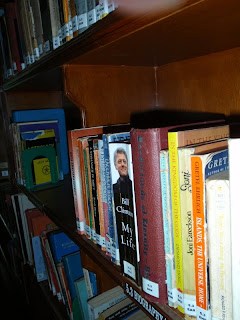 We enjoyed the views and gardens while observing the peaceful life of monks and students at this beautiful Buddhist site. The serenity and quiet was a welcome respite from the Kathmandu chaos and noise. 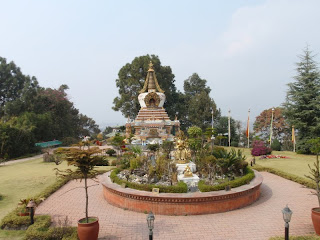 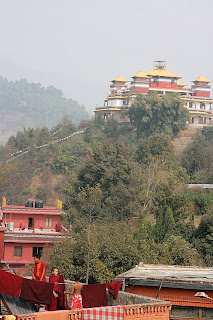 As a side benefit, I got one of those nagging questions answered. 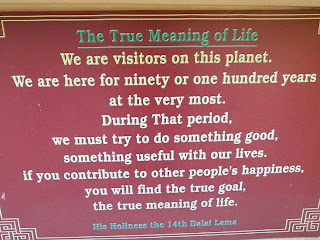