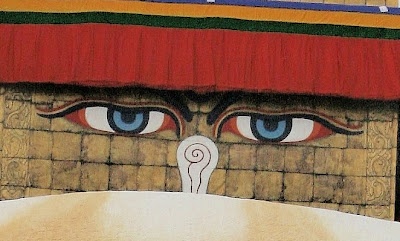 [Editors Note: This is a note from the blog future. Your loyal blogger is currentily in Kathmandu and about to leave for three days in a national park with no internet or electricity. The next opportunity to update this blog will be during an eight hour layover in Delhi on the way home. The blog is hopelessly behind. We have a weeks worth of posting from Jaipor, Jodhpor, and Udaipor. The blogging gap will have have to be filled in the fullness of time. Right now we are intending to leap ahead a week and reset the blog here. Any interested should look back in time from this post, where I will be filling in the missing dates over the next few weeks or months. This note will be deleted if and when I ever get this journal caught up - Ed].

"Feb 21: Udaipur - Kathmandu. Board the morning flight to Delhi. Connect with the flight to Kathmandu. ( Arrive at Kathmandu in the afternoon. You are greeted at the airport by our travel facilitator, and then ushered to a chauffeur driven vehicle. You are then driven to your hotel where you are assisted with your check in.
Late afternoon - Pay a visit to Pashupatinath temple and Boudhanath Stupa, a World Heritage Site. Pashupatinath Temple is one of the most sacred Hindu shrines in the world."

This will be a four airport day. Actually five airports within 24 hours if you count the Kathmandu Everest flyby scheduled for the morning of the 22nd. But I am getting ahead of myself.

We are up at 4:30, check out of the Lake Palace, and take the water taxi to meet our driver at the jetty by six.

I have to say, the Indian flight security through this entire sequence was the best I have ever seen, bar none. Our flight from Udaipor to Delhi stopped at Jodhpor. Some passengers got off. A representative came on board and made sure every single piece of carry-on luggage was claimed by someone still on the plane before new passengers were allowed to board.

I am sure recent events here and here, had something to do with the heightened security in evidence. Even though I understand crossing a street in Delhi is statistically far more dangerous than a terrorist attack, it was reassuring nonetheless. 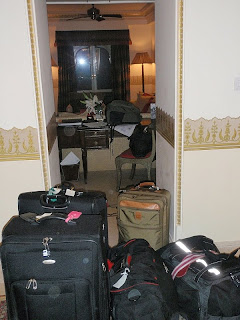 Checking out of the Lake Palace with too much luggage. 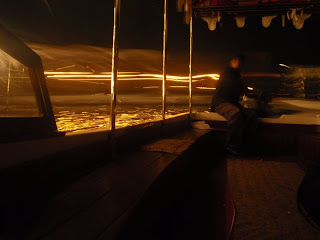 A pre-dawn water taxi to the jetty. 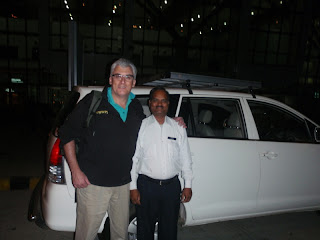 We say goodbye to driver Keshav.
He kept us safe driving a lot of kilometers across India 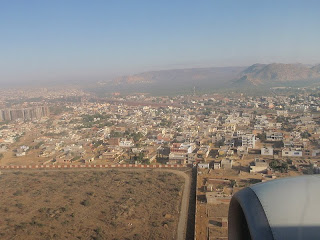 A short stop in Jodhpur 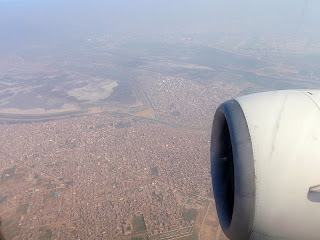 A longer stop in Delhi, but just enough to get us through security in the International terminal. 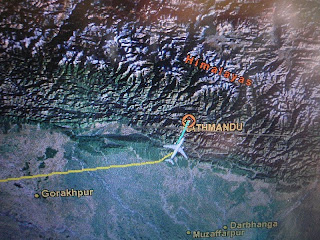 And on to Kathmandu, Nepal...
Where they have no problem getting our luggage into a waiting van. 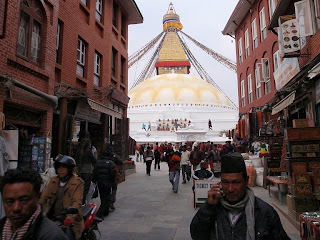 No tour of Kathmandu is complete without a circumnavigation of the Boudhanath Stupa.
We are surprised (although we should not have been) to find a mini version of the Varanasi ceremonies on the banks of the this tributary of the Ganges: 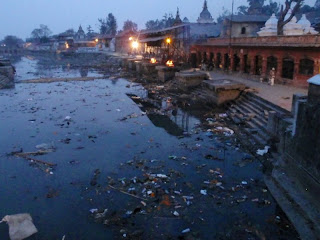 Cremations on the river bank.
I think I'll stay out of the water this time.
We were even more surprised to find this political rally march directly by our hotel: 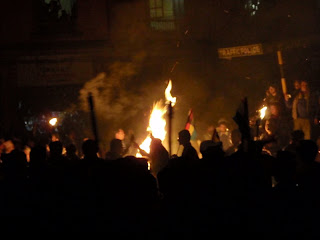 I was very curious, of course. Turns out these are the Monarchists, and they had called a general strike on the following day (our one full day of touring in Kathmandu) as a counter move to the Maoist party general strike last December. Some interesting politics going on here. More than I can do justice in this post, but there is a pretty good summary in this article. Things may be unraveling in Nepal over the next few months.

Post this as we head out the door on the 23rd. We will be driving to Chitwan National Park now. Probably no more posting until we get back to Delhi.
Posted by mw at 11:34 PM