Mid-Week Round at Lincoln Park 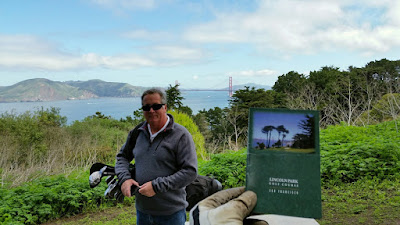 Met Captain Jim for a round at Lincoln before he heads back to the Mediterranean. A cloudy start, but the sun came out and we had clear crisp day.

Surprised to find the course a little  backed up on a Thursday afternoon. We caught and joined the twosome in front of us. Matt and Caleb, father and son from Wausau, Wisconsin  on their last day of vacation in San Francisco.

Thought I was getting my game back on track with a 49 on the front, but the wheels came off on the back. My expected breakthrough round will have to wait. 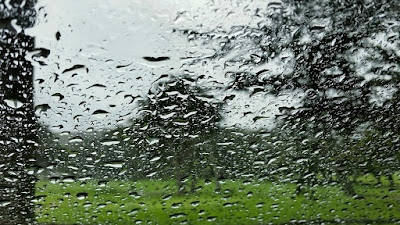 The rain started in earnest as we finished the round. As we counted the scores,  Bob decided to test my dietary resolve by ordering the biggest plate of corned beef hash, hash browns and eggs that I have ever seen. I had a green salad. 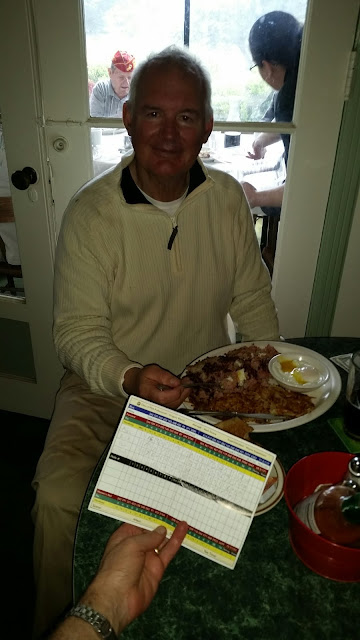 Despite my birdie, my breakthrough round failed to materialize. Five 7's, two 9's, and a snowman will do that to you. 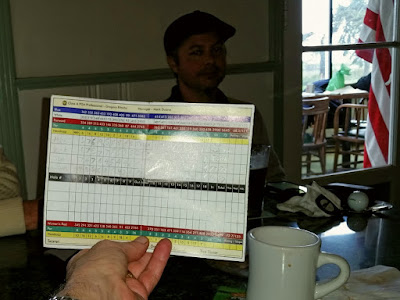 On the plus side, I did not have to give up the game as a consequence of playing this round. 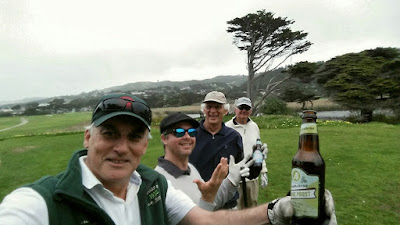 Rick and I have beers. Bob and Brad do not.

Sent from my T-Mobile 4G LTE Device
Posted by mw at 7:48 PM No comments:

Sent from my T-Mobile 4G LTE Device
Posted by mw at 7:44 PM No comments:

The 15th is a 135 yard par 3 carry over a corner of the lagoon. The green is protected by sand traps and Bob's Tree on the right side of the green (the tree was named for Bob's tee shot on a previous outing, which landed in the tree). The tree and that outing are commemorated in this painting by Bob Preston at the top of this post. The guy looking for his ball is Bob (not the artist - Original Bob). The reason OB1 couldn't find the ball is that it was in the tree. As far as we know, it is still up there today. 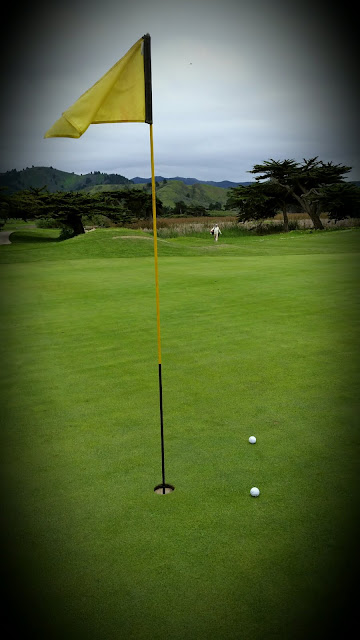 When we arrived at the 15th tee, there were two beers left. Usually this means the best and worst golfer in the foursome team up against the other two to play for the extra beers. Instead, the two best golfers - Brad and Bob - decided to steal the beer by teaming up against Rick and me. Unfair? Yes. But Instant Karma is a bitch.  The ball in the back is Bob's 2nd shot. An easy par. The closer ball is my tee shot - one foot away from a birdie. That close to an ace. 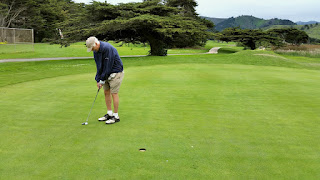 Rick sinks a 6 footer for par. Bob and Brad both sank their pars, routine for golfers of their caliber. The difference would be my birdie putt.


In case you don't recognize what's going on here, I am doing a "dead-on" impression of Hale Irwin celebrating sinking a 45 foot putt on the 72nd hole of the 1990 U.S. Open. I just wanted to clear that up.

Finally, it should be noted that a foursome comprised entirely of Bad Golfers played the 15th hole at Sharp Park with a cumulative score of one under par.  This is like getting struck by lightning, winning the lottery and crafting a perfect March Madness bracket all at the same time. 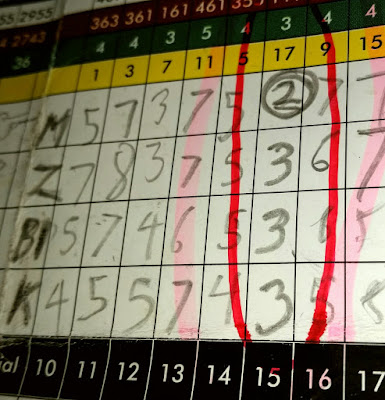 Just goes to show the true motivational power of Beer. 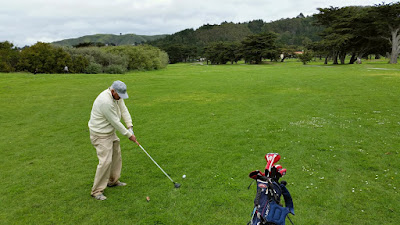 Bob in the fairway...

and in front of Laguna Salada. 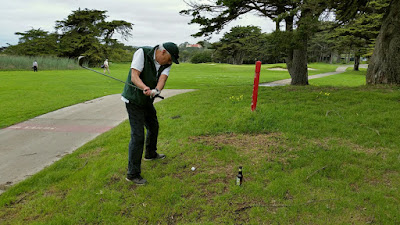 In the meantime, I'm working my way around trees on the right side of the fairway.

Sent from my T-Mobile 4G LTE Device
Posted by mw at 6:23 PM No comments: 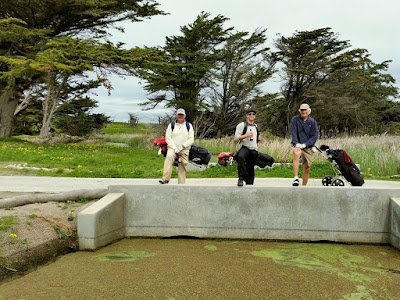 How about the "Alister MacKenzie Span"? Or perhaps in honor of the men who helped guide these course improvements through a legal and regulatory maze, the " Bo-Rich Bridge Over Troubled Frog Waters"?

The wind off the ocean stiffened considerably, I needed a driver to get to get to the 185 yard green. Which I did. Missed the 18 ft birdie, but got the par. As did Rick.


Bob and Brad did not.

Sent from my T-Mobile 4G LTE Device
Posted by mw at 6:12 PM No comments:

Somewhere after the turn...

We were running behind after a beer run. This is the 12th hole. First opportunity to get this posted. 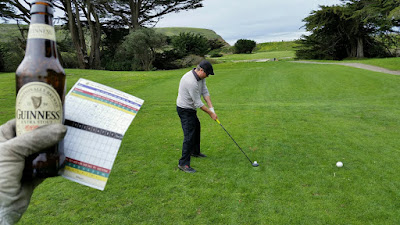 I am in danger of needing to give up the game of golf.

Sent from my T-Mobile 4G LTE Device
Posted by mw at 2:59 PM No comments: 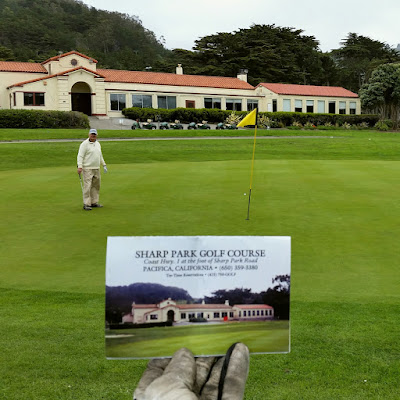 Rick off the tee on 7 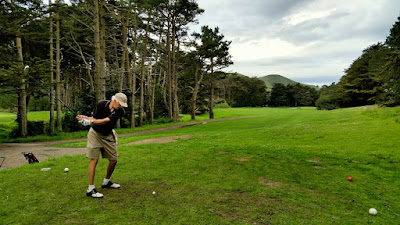 Brad making his way back to the 6th green 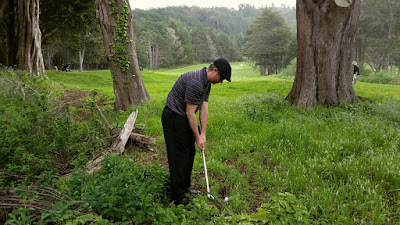 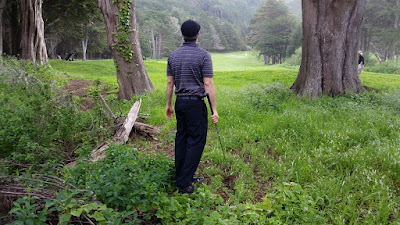 Never a doubt. On the green.

Original Bob off the 6th tee

The blog is running a little slow today as we look for plugged and muddy balls in the fairway. 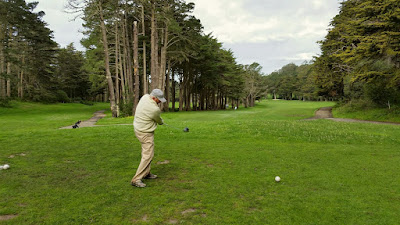 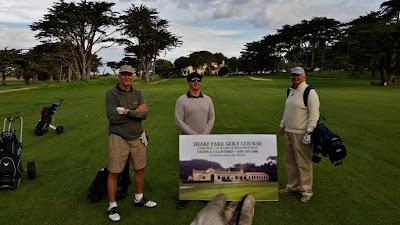 Playing with Brad, Rick, and Original Bob (OB-1). No wind, warm weather, a hint of blue skies breaking out. We have the course to ourselves. Perfect day.