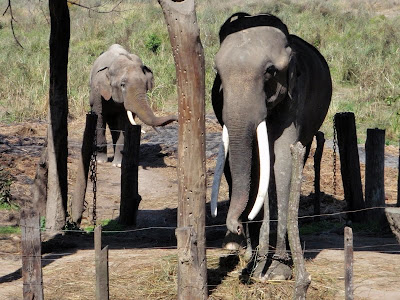 From the moment we arrived at Tiger Tops Lodge we were hearing about the wild elephant in the park. At first this struck me as odd. Why wouldn't there be wild elephants in the park? The reality is a rich diversity of extraordinary and rare wildlife exist in Chitwan National Park, but there are very few wild elephants. The park straddles the India border and is contiguous with a park in India where elephants are more prevalent. Occasionally a young male will wander across the border into Chitwan in search of new territory and female elephants. Tiger Tops is home to a stable of mostly female domesticated elephants which are employed as mounts for the "elephant safaris" into the park. The stable of domesticated females is an obvious attraction to a young bull.

When young bull elephants are in musth, they can be unpredictable and, as described by the Tiger Top staff, downright"crazy". This is the case with the rogue currently wandering in the park. The elephant had killed one man and injured another only a few weeks before. The staff was closely monitoring the location of the elephant at all times, and would divert or delay nature walks, elephant safari's and other guest activities based on the movement of the wild elephant. Shortly after the morning nature walk, the wild elephant made a dramatic appearance at Tiger Tops. 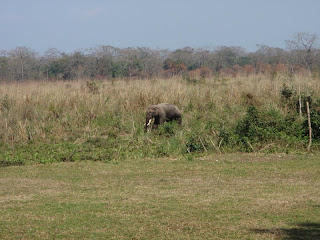 I was heading to the main building for lunch, when Dhan got my attention. "The wild elephant is coming. He will walk by here." Most of the other guests were already sitting down to lunch.

Sure enough, he came strolling along the two wire fence, making a bee-line for the elephant stable. The only thing between the park, the wild elephant, and us, was a simple fence comprised of two small wires strung along six foot posts. As a physical restraint, it couldn't stop me from walking through it, let alone a full grown bull elephant. But it looks like the electrified fences farmers use to keep elephants out of their fields. It is not electrified, but it looks like it. Apparently this elephant had seen that kind of fence before, and was not inclined to test whether it was plugged in. As Dhan explained with a smile "We are lying to the elephant". 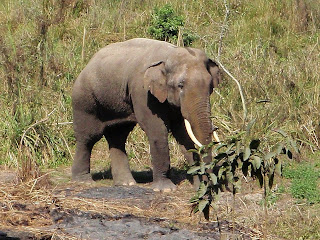 Most of the staff started toward the stables to see what would happen. I decided this was more interesting than lunch and followed the staff. Dhan looked concerned and attached himself to me. "How fast can you run?" He asked. This was actually a serious question. Dhan was worried as he had seen me limping a bit during our nature hike earlier in the day (lingering effect of getting my knee scoped last summer). This was, after all, a killer elephant. Still - all I could think of was an old joke "I can't outrun the elephant, but I only need to outrun you." Dhan was not amused.

While much of the staff gathered around the stables, I think I was the only guest, and shot the video clips compiled above. In the clips, the wild elephant arrives, and moons forlornly over the females from the other side of the fence. There is one domesticated male elephant living at the lodge, a big tusker that was born and raised in captivity. He was off working with some of the females hauling grass when the wild guy showed up. He returns in the middle of this clip. He has bigger tusks, and should be dominant, but it is not clear to me how they react to each other. The domesticated male appears to lose interest despite the efforts of the handlers to keep him focused on the interloper.

CEO Marcus Cotton (with the binoculars), and Director of Operations Tim Edwards (standing next to him) watch the interaction. Eventually the wild elephant wanders off. I'm sure this is not the end of the story, but unless someone from Tiger Tops sends me an update, I'll never know how this eventually played out. My guess - I don't expect the wild elephant will be denied the object of his affection. 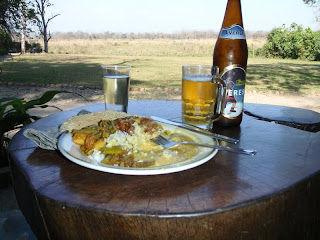 But for this particular chapter in the pachyderm love story, it was all over in time for me to still enjoy lunch.
Posted by mw at 11:58 PM