Varanasi - Evening on the Ganges

"Feb 7: A city tour of Varanasi that includes visits to the numerous temples that dot the banks of the holy river. You will be able to walk through the narrow lanes and stop by at the bazaars to have a look at, among other things, the world famous Banaras silks. Sunset cruise on the Ganga — cruise on the Ganga at sunset and have a grandstand view to witness to the ancient prayer and oil lamp ceremony, as hundreds of lamps are sent floating on the holy river as the sun sets." 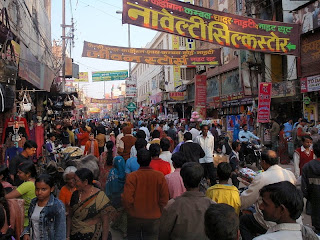 After a wild drive through Varanasi traffic, we walk through crowded streets to the banks of the Ganges river. There our guide secured a skiff where we row along the waterfront. 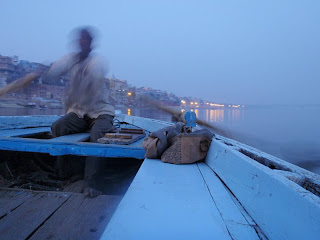 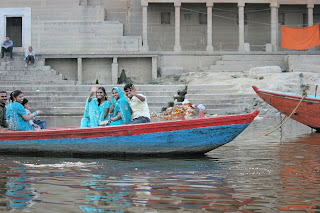 The ancient history of the city and its spiritual significance to Buddhism, Hindu, Jains, and Islamic religions are important context to the cacophony of sights, sounds and smells that assault the senses in this place. Our guide Dharum, does his best to provide every bit of that context over the next few hours. 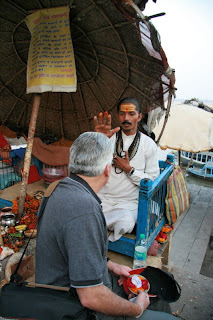 It will take a while to digest what we experienced here. This will have to be a placeholder post as I don't have time to do it justice or even sort through the hundreds of photos. In the meantime, a selection of photos and impressions from the our evening on Mother Ganga. 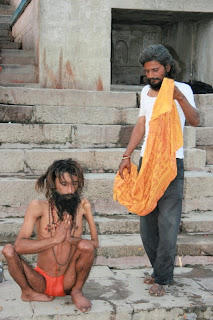 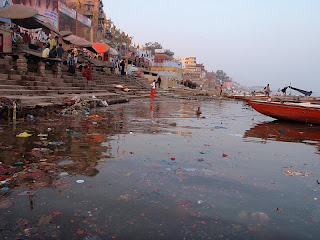 The city is primarily Hindu. These pictures focus on two important aspects of Hindu spiritualism on the river. 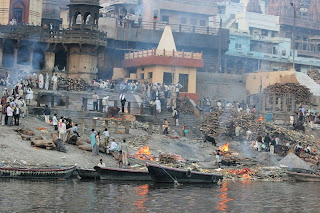 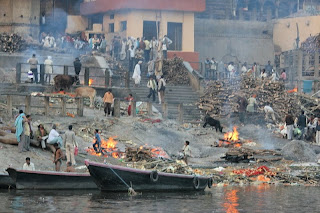 The open air cremation of bodies on the river at this particular ghat occurs 24 hours a day seven days a week, and accommodates over 300 bodies a day. Because Hindus believe that cremation and burial in Varanasi on the Ganges releases the soul from the cycle of life and death, bodies are transported here from all over India.

After drifting past the cremation site, we returned to the ghat where we left, just in time to watch the Dev-Dipavali Mahotsava - a spectacular celebration of life and spirituality that takes place every night on the river. It is an energetic celebration and thanksgiving for every single day of life. the spectacular is repeated every night of the year on the river. The best way I can describe it is one part Mass, one part tent revival meeting, and one part part Busby Berkeley musical. 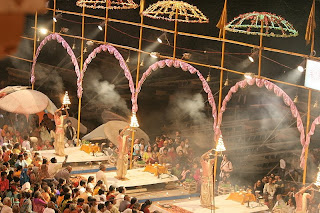 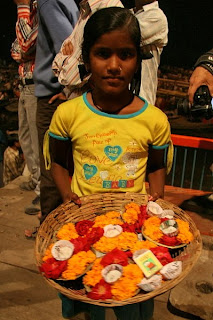 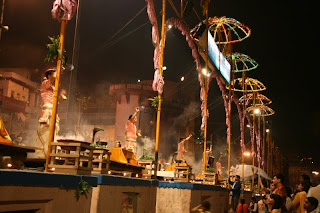 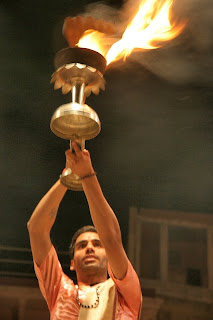 I recorded much of the ceremony on a digital video cassette to better capture the hypnotic sound and spiritual stagecraft with better fidelity. I'll post an edited version here eventually, but in the meantime this clip from my point and shoot will have to do.

Mike
Without me there to ring bells, bang on gongs, Light candles or pour water you need to take my place as the superstitious/mystic member of the traveling party. I expect to see pictures of you making offerings or whatever you do to invoke divine benevolence in India.

These photos are spectacular. This culture is very interesting, to say the least. You two stay safe. I feel a bit better about things after I read an article about snake charmers being banned from working in India. :)

Stan,
I cannot pretend to maintain anything close to the level of spiritual enlightenment you strove for during our trip to Japan. However, I believe in one stroke and one spiritual act, I trumped all your bells, gongs and candles combined. Not that I am trying to assert some sort of competitive spiritual one-upmanship or anything.

That would be wrong.

Laurie,
I only saw one snake charmer. He had a black cobra in a small basket sitting cross-legged on a very narrow street of Old Varanasi. Sigrid didn't know that she walked within 24 inches of the snake until I told her about it later. That was probably best. Ignorance is bliss.