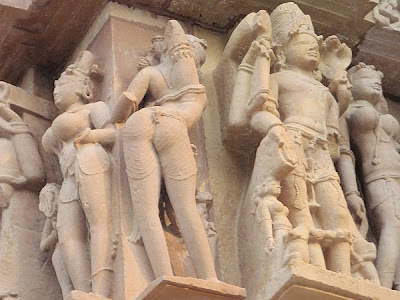 "Feb 9: Varanasi - Khajuraho. You are at leisure in the morning. Board the afternoon flight to Khajuraho. Arrive at Khajuraho and transfer to your hotel. There is a break for lunch. Afternoon - Start your tour of the temples. These magnificent examples of Hindu religious art were constructed over 1000 years ago. The detailed artistry of the sculptures and their incredible volume are both beyond explanation." 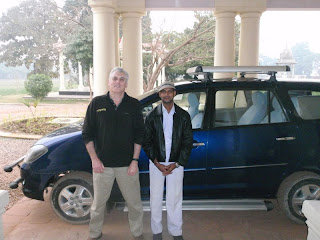 One more breakfast at the hotel, then Booblue picks us up. Surprisingly, we are still carrying too much luggage. After a brief diversion to a hand loom silk factory, we find ourselves at the airport waiting for a flight that is delayed by two hours. 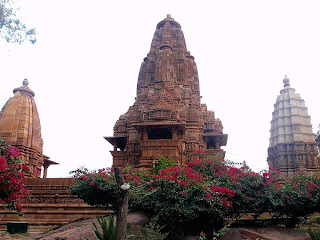 Greeted at the airport, we are transported to the hotel, check-in, and immediately head out to the temples for a compressed tour. We are fortunate to have Anurag Shrivistava as a guide. He is a student of art history, with an abiding love of and pride in this place. Touring the site with him is like taking a graduate course Indian art, history, philosophy and religion. 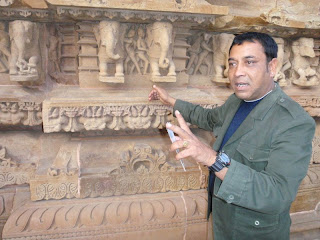 Anurag
Among the gems we pick up from him, is the nugget that we are once again walking in the footsteps of Ibn Battuta, who visited Kajuraho in 1335:

"The noted Arab traveler Ibn Battuta, visited Khajuraho in 1335 AD, to see the miracles performed by the Jogis. He cites in his memiors, a large, one mile long pond, surrounded by temples. He must be referring to the Shivsagara tank, which is near the western group of temples."

Unlike the speculation in the linked quote, Anurag thinks the entire huge complex was built in a man-made lake, with boats ferrying tourist and priests among the dozens of temples. At some point I'll find a translation of the relevant entry for Ibn Battuta's journal and post it here. 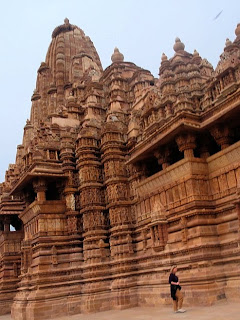 One of the best preserved temples 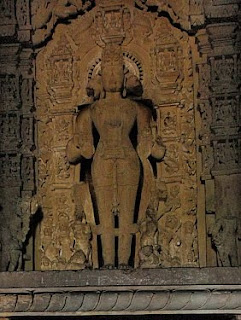 Shiva in the inner sanctum


Anurag in action
Clouds roll in and thunder interrupts Anurag's lecture. We get back to the hotel as the unseasonal rain begins. Despite being very impressed and appreciative of Anurag's guidance, and we are not the only ones who think so. Nevertheless, Sigrid and I later determine that in the confusion in the rain, each of us thought the other had given him a tip. As it turns out, we stiffed him. Bad Karma.

[EDITORS NOTE: I could spend the rest of this trip posting about Varanasi, but I'm falling behind and have to move on. At some point I will fill in some additional pics and stories from the two days touring Varanasi]
Posted by mw at 11:28 PM