Most Dangerous Drive Redux - Back to Kathmandu and Nagarkot 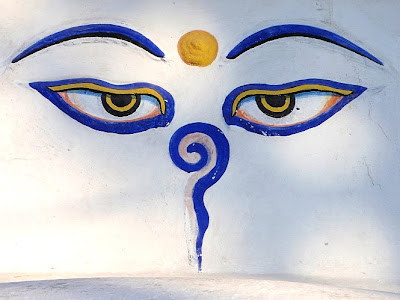 "Feb 25 - Chitwan - Nagarkot. 5:30 a.m.: Wake-up call followed by tea/coffee.
6:00 a.m.: Bird Watching / Elephant Safari / Jungle Walk.
8:00 a.m.: Breakfast.
9:30 a.m.: Departure. Drive to Nagarkot. Arrive at Nagarkot and check in your hotel."
Late afternoon - You can choose to wander around the village or indulge in a short trek in the surrounding wilderness."

This day had the greatest variance from the expectations set in the itinerary and your loyal blogger's single biggest gripe about the trip. As I've said before, in general we were very happy with the itinerary, planning and service provided by Easy Tours of India during the trip. But this day was a big time miss.

Our last Elephant Safari was a great start on the day, but the itinerary simply does not appreciate the nature of the drive to get back to Kathmandu, and Nagarkot is on the other side of Kathmandu. 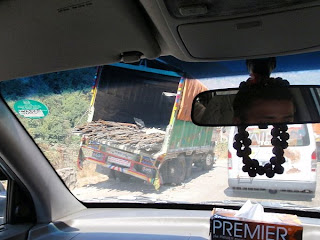 So instead of a miserable six hour drive back on one of the most dangerous roads in the world, it actually becomes miserable eight hour drive... ...with the last two hours fighting traffic in rush hour through the smog choked streets of Kathmandu - before beginning the climb to Nagarkot. 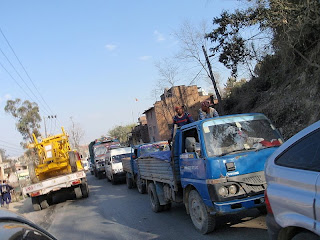 By the time we got to Kathmandu we needed a break, and Surendra wanted to pick up at least one of the sites we missed during our previous strike-hobbled tour of the city. So we spent a few minutes stretching our legs and enjoying the views at the Swayambhunath Temple... 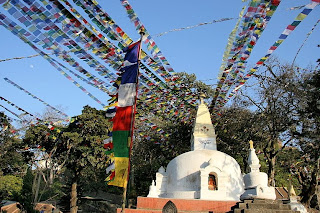 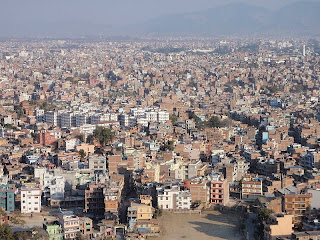 ...also known as the "Monkey Temple" - for obvious reasons: 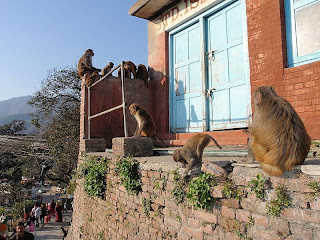 By the time we finally get to Nagarkot it is dark, and the itinerary suggestion to "wander around the village" or "indulge in a short wilderness trek" is fantasy. It just can't happen on the back end of this drive, even if our kidneys had held out and we had not stopped at the monkey temple.

The first Kathmandu - Chitwan drive could be justified based on an opportunity to see Nepal from the road, and to avoid the unreliability of Nepal air travel. But making a long drive back even longer, arriving after dark, and knowing that we would be getting up to greet the dawn and then head immediately back down to the airport - all to get one early morning view of the Himalayas - struck me as batshit insane. Hey - it is a nice view - just not worth that drive.
Posted by mw at 11:48 PM