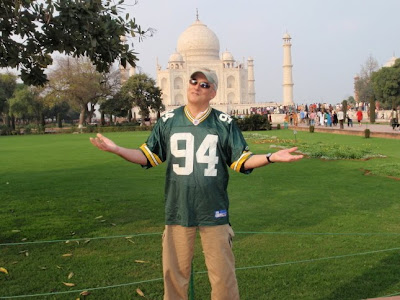 "Feb 11: Agra. Afternoon - Visit one of the Seven Wonders of the World, the incomparable Taj Mahal. The worId’s greatest monument dedicated to love; the Taj Mahal was built by Emperor Shah Jahan in 1653 AD as a memorial to his beloved queen, Mumtaz Mahal. This pure white marble mausoleum took 22 years and 22,000 craftsmen to build. Tour the amazing monument and its surroundings till it is time to admire the sun's rays setting on the Taj Mahal’s facade."

Panorama of the Taj and river from the West at sunset (click to expand)
In Varanasi I was reminded of Mark Twain 's 1897 travelogue "Following the Equator" chronicling his lecture tour and journey around the world. Much of the book entails his observations and reflections on his extensive stay in India. I found the full text version on-line (most of the hotels thus far offer Wi-fi access to the internet, reliable, but not free) and was curious about his impression of the Taj Mahal:

"In Agra and its neighborhood, and afterwards at Delhi, we saw forts, mosques, and tombs, which were built in the great days of the Mohammedan emperors, and which are marvels of cost, magnitude, and richness of materials and ornamentation, creations of surpassing grandeur, wonders which do indeed make the like things in the rest of the world seem tame and inconsequential by comparison. I am not purposing to describe them. By good fortune I had not read too much about them, and therefore was able to get a natural and rational focus upon them, with the result that they thrilled, blessed, and exalted me. But if I had previously overheated my imagination by drinking too much pestilential literary hot Scotch, I should have suffered disappointment and sorrow.

I mean to speak of only one of these many world-renowned buildings, the Taj Mahal, the most celebrated construction in the earth. I had read a great deal too much about it. I saw it in the daytime, I saw it in the moonlight, I saw it near at hand, I saw it from a distance; and I knew all the time, that of its kind it was the wonder of the world, with no competitor now and no possible future competitor; and yet, it was not my Taj. My Taj had been built by excitable literary people; it was solidly lodged in my head, and I could not blast it out." - Mark Twain - Following the Equator" 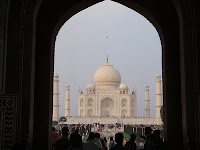 He proceeds to spend almost two chapters agonizing and analyzing why the Taj Mahal does not live up to the preconceived perceptions created by the flowery language of the writers who preceded him. I think this is a problem for any visitor to the Taj, although I cannot get as overwrought about the issues as did Twain. The building, the story, the site is magnificent. But what can one say that is unique about a monument that has been as photographed and written about as the Taj? Not to mention being the only one of the "Seven Wonders of the World" still standing?

Fortunately my nephew solved that problem for me: 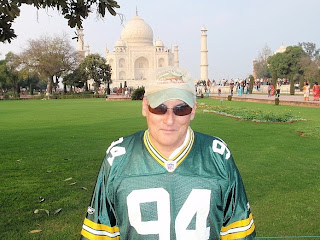 Wager settled in full.
There was a long line to go inside the Taj. Our guide Shurveer found a way around the line. I'm not saying, you'll have to ask him. Sigrid made a noble photographic effort to find something new and interesting angles: 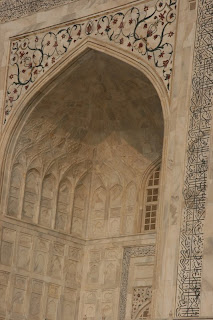 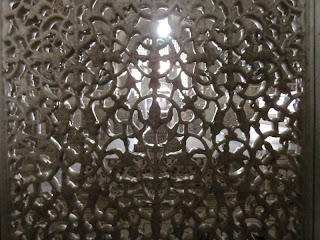 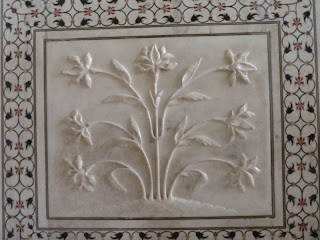 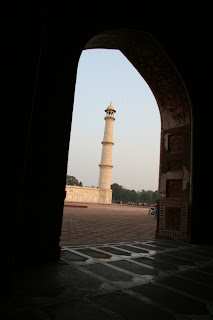 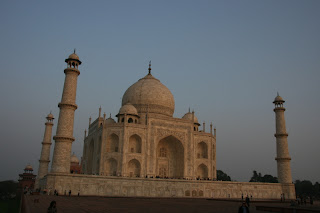 A truly inspirational way to view the Taj Mahal. Examples of perfection, both east and west, brought together and each improving the other.

Roy,
I hope you are happy. Thousands of people travel here to enjoy and wonder at this exquisite monument to love, and instead are jarred by the site of me parading around in this abomination of a jersey. Very bad karma for you. If I were you I would schedule an immediate flight to India and bathe in the Ganges before it is too late.