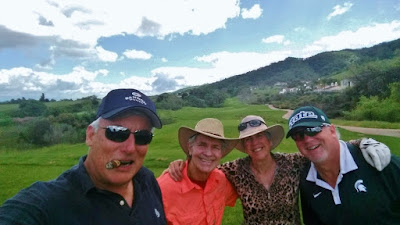 Played Eagle Ridge on Saturday with Donna, John and Bob in an Oracle Golf Club Event. This was the third OGC tournament this year, but the first I was able to attend. These are low-key tournaments hosted at a variety of courses around the Bay Area. Weather was great, course was pretty (if still a little wet and shaggy), the golf - not so much.

Everyone plays their own ball, but it's scored as a team competition based on the two net best balls of the foursome. I've long held the theory that the optimal foursome in this format is one single-digit handicap ringer (John), one playing from the red tees (Donna), and two high handicappers (me and Bob). Another perfectly good theory shot to hell.  Some pics from the day:

Bob and Donna on the tee
Bob wanted me to show you this pic of his drive, which would be the longest drive if Bob was in the fairway. However...

We had a few problems out there... 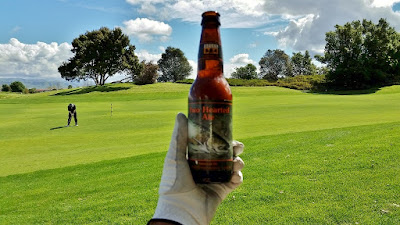 ... since Bob brought good beer and cigars. So the score was irrelevant.
Posted by mw at 8:46 PM 2 comments:

I was offered a unique opportunity to join friends on a two day pilgrimage to the golf mecca of Bandon Dunes. It was kind of a celebration tour after our recent victories in the SF Golf War. In anticipatory panic, I've been hitting the EssEff municipal circuit hard, playing some wet and shaggy winter golf. The big day arrived on the first day of spring. We played Pacific Dunes on the equinox and played the original 1999 Bandon Dunes course the next day.

For my non-golfing readers - the courses at Bandon Dunes have emerged as a bucket list destination for golf enthusiasts that rivals storied locations like Pebble Beach and the old courses of Scotland.

Located on a remote stretch of the Oregon coast, it seems an unlikely site to build a premium golf destination. There are no major population centers nearby, is difficult to get to by plane, train or automobile and being Oregon, wind and rain is the rule, not the exception. Yet even with the record rains this year, the courses, lodge and practice center continue at capacity most of the time.

The resort reflects the singular vision of the pre-eminent golf course developer in the country world today - Mike Keiser. The story of Bandon Dunes, it's impact on the local community, stunning natural setting, respect for the environment, and architectural roots steeped in golf history represent the very best in golf.

Playing and staying at the Bandon Dunes resort is not cheap, but it is a premium experience accessible to the average golfer, an open friendly ambiance without the private club pretension and elitism that is often associated with the game.

It only confirms Keiser's status as the most important and respected golf course developer in the world when the pretender to the throne feels compelled to tweet insults at Keiser's courses.

Both Aberdeen and Turnberry in Scotland, and the soon to open Doonbeg in Ireland, blow Bandon Dunes away. Bandon is a toy by comparison!
— Donald J. Trump (@realDonaldTrump) October 20, 2015

Not sure whatever happened to that loser. I assume he's still developing overpriced courses and trying to outdo Keiser. Perhaps he moved on and aspires to be the greatest golf developer in Russia. He should do well there as his taste closely aligns with Russian oligarch "Dictator Chic" anyway. But I digress.

In the meantime, there is tremendous buzz in the golf world about Keiser's most recent development in central Wisconsin - Sand Valley.  I may have to detour my semi-annual trek through Wisconsin from Chicago to the U.P. after the course grand opening this May.

Enough about golf course development... How about some pics from a couple of great days playing golf in a slice of golf heaven? 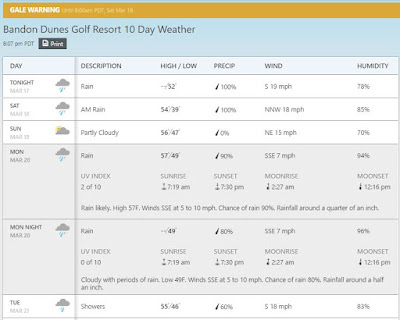 Rain and showers were in the forecast both days, but no matter. These are Scottish golf style courses, and as the Scots say: "Nae rain, nae wind, nae golf."

We got some rain for our first round at Pacific Dunes on Monday, but not that much. Tuesday was sparkling with sunshine, blue skies and wind. Lots and lots of wind. In no particular order... 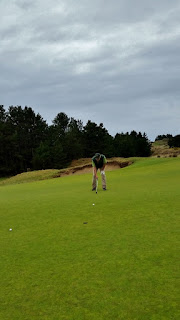 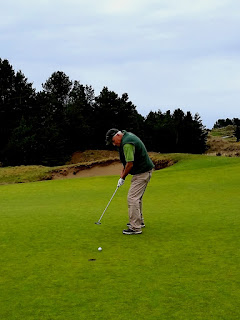 My Pacific Dunes highlight - a birdie on the par 4 1st hole.
Bo wanted an assist for my birdie. I don't know why.

Bo and Joel blast their way out of the same trap on 15... eventually.
Note that there are more than two sand divots. Just sayin'

I have a few more pics posted on facebook. It was a great couple of days, one of the best golf experiences of my life. We only got to two courses in two days, but that was plenty for me.

On the flight back we were asked - "If you could only play one for the rest of your life, which would it be - Doak's Pacific Dunes or Kidd's Bandon Dunes?"

I was the outlier. Both courses offer spectacular ocean bluff-top views, dramatic terrain, rolling greens, heaving fairways, and strategic bunkering. The case can be made that Pacific Dunes offers more of all of the above. But my choice was Bandon Dunes. It's a course I feel can play at my level today, without some of the punitive aspects of Pacific Dunes. Yet it's a course that would continue to challenge and delight no matter how much I improve. Which isn't likely to happen anyway, so there's that.

Thanks Richard, Joel, Bo and Mike for the fantastic experience.

I've been desperately trying to get my golf game into some semblance of respectability, as I have a special opportunity to play this week (stay tuned). In addition to work at the driving range and  a round at Sharp and Harding, I spent a couple of mornings playing and practicing on the back 9 at Lincoln. Dawn patrol is not always like the picture at the top of this post. In fact, it's pretty rare to see the sunrise. More typically it was like this morning's fog.

Some pictures from the last day of  west coast winter golf.


I'd like to think this practice will make a difference.
Posted by mw at 11:10 PM No comments: