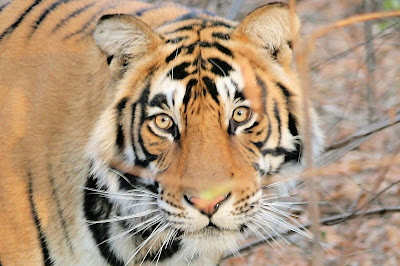 This is T24, a four year old male tiger. Sigrid took this shot from the jeep on our second game drive in the Ranthambore National Forest. The drive started around 2:30 PM. We were in section 1, where a tiger was spotted earlier that morning (probably while we were on a game drive in section 2). Batti and Kaushel are again our guide and driver. Despite their best efforts, including extended stakeouts at several watering holes, our drive was almost over and time was running out. We started on the road back to exit the park. Strike two, or so we thought. We'd have one more shot in the morning. We just met a couple who had been on four drives and not seen a tiger yet. Not very encouraging.
As we bounced along a road near the bottom of a scrub covered hill, we came upon a parked caravan of safari vehicles - at least two jeeps and a convertible bus. The passengers in those vehicles were quite animated, pointing their cameras and looking up the hill. Batti has a brief conversation in Hindi, then reports back 'There is a tiger coming down the hill". We wondered how anyone could spot a tiger in that thick brush. Later we learned that no one spotted the tiger, it was a peacock warning call that alerted the guide. Our jeep pulled up to the end of the line, shut down, and we waited - peering intently into the scrub.

He walked into the clear right above our jeep. I was ready with the video setting on the Olympus:

After stopping to assess the line of vehicles, he sauntered directly behind our jeep, across the path and disappeared into the woods on the downhill side. He passed no further than 10 or 12 feet from where we were standing. After eight hours of bouncing around in the back of the jeep, we had five minutes of tiger, and we couldn't have been happier or more excited. Sigrid got some great stills: 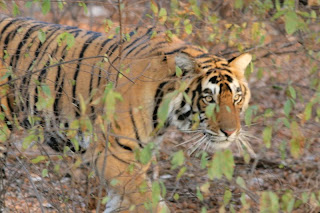 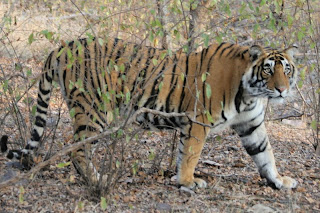 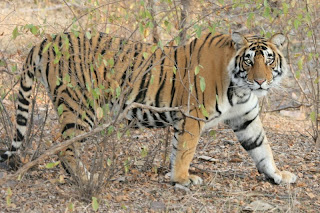 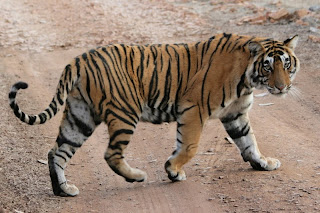 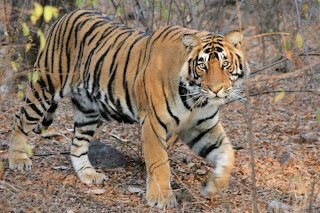 I asked Batti if he recognized the tiger. He answered without hesitation. "Oh yes. T24. A 4 year old male. He is very shy. It is only the second time I have seen him." He proceeds to explain that this tiger had an infected leg injury and had to be tranquilized and shot up with antibiotics. In fact, he said the tiger was tranq'ed and inoculated for seven days. This probably explains why he was a bit wary of the jeeps. We were very happy that he decided to come out of his shell this day.

Of course, there were a lot of other interesting animals and birds we shot along the way, but this post is just for T24. And Batti. And Kaushel. Thanks guys.
Posted by mw at 11:06 PM

I sense a dramatic rise in the photographic quality of this post when compared to other recent posts!

As a policy, and to avoid potential embarrassment for the blog photography staff, we do not attribute every photograph. We leave it to The Reader to sort out the individual photographic style.