He had just put me through the paces - reaching, stretching, pulling, pushing, testing the right shoulder he repaired last July.

"You are doing great. The shoulder is healed. It's not quite back to 100% strength and range, but that takes a year after a massive tear like yours."

He wrote another scrip for continuing physical therapy and said we did not need to schedule any more appointments.

I pulled out the scorecard and handed it to him. As we had discussed before, I had three goals for my rehabilitation: One - fishing in Michigan in September; Two - abalone diving in November; Three - Golfing in the low 90's in January.  Two down, one to go. 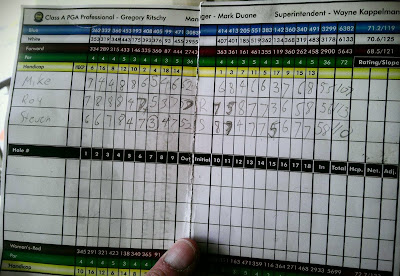 The scorecard was from my round the day before at Sharp Park.  It was my first round since surgery. My score was 107.

He studied the card. "Did you shoot in the 90's before the surgery?" He asked. 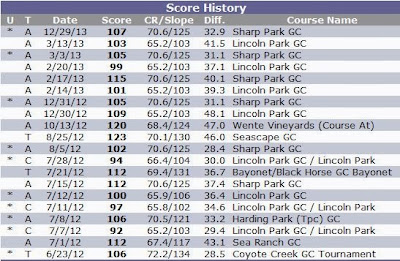 "Not often. But I expected this surgery to improve my game." 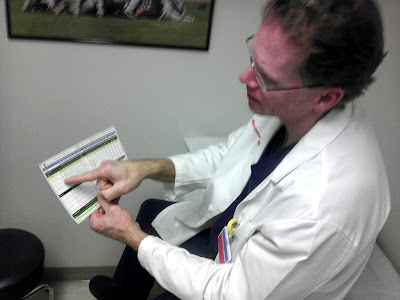 "This guy. Roy. He really shot 3 eights in a row?" Concern was written all over Dr. Bill's face.

He shook his head.

"Have him come see me. I think I can help him."

Postscript:
Before Sunday's round I'd not played since March. My NCGA handicap revision e-mail arrived.  It included the recent round. My Handicap Index increased to 30.2 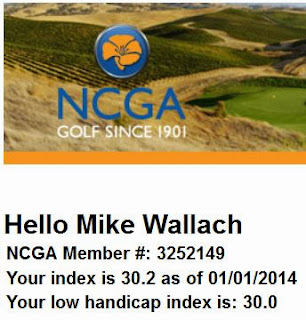 I can't live with this humiliation anymore.

My 2014 New Year Golfing Resolution is to get my Index down to a 25 handle.

I did it before. I can do it again.

I mean, that hopey, changey thing worked out for the president, didn't it?

Team Erickson brings us home on 18 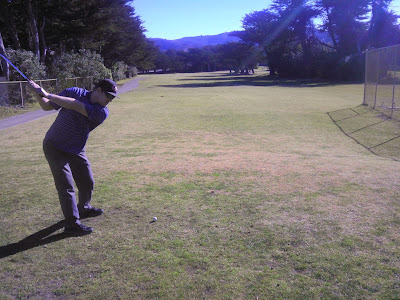 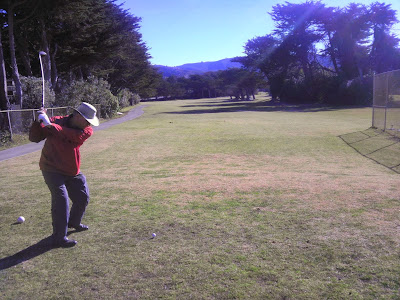 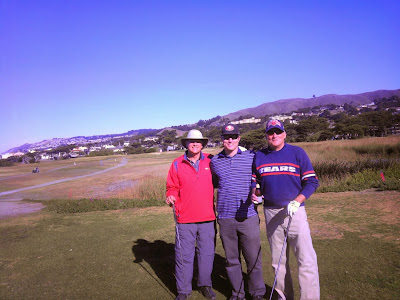 I said I would only use irons for this outing, but pulled out the driver for 17. Couldn't resist.

Plus I was in a hurry. The Bear game starts in an hour.

A 235 yard calibrated slice into the middle of the fairway. 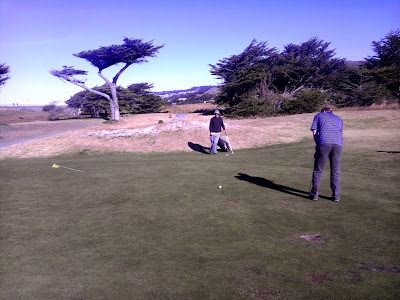 Well, some of us are on the 12th green. You can see Roy on the 13th  tee in the far distance under the tree.

3 tee shots into the hazard was more than he could take. We have him on suicide watch for the remainder of the round.

Somewhere after the turn. 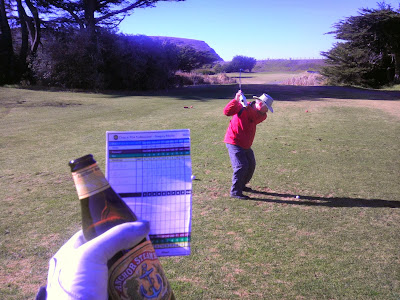 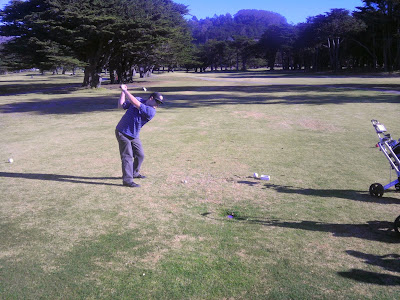 Chris shows us how it's done 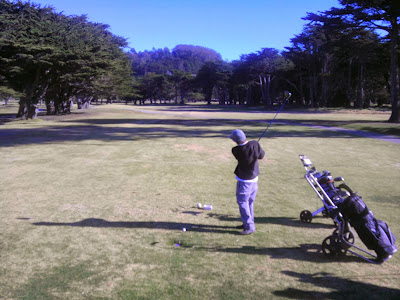 The starter put him in our group to fill in for our MIA unreliable golfer. Poor f*cker.

Roy in and out of another trap. It's in the hole! 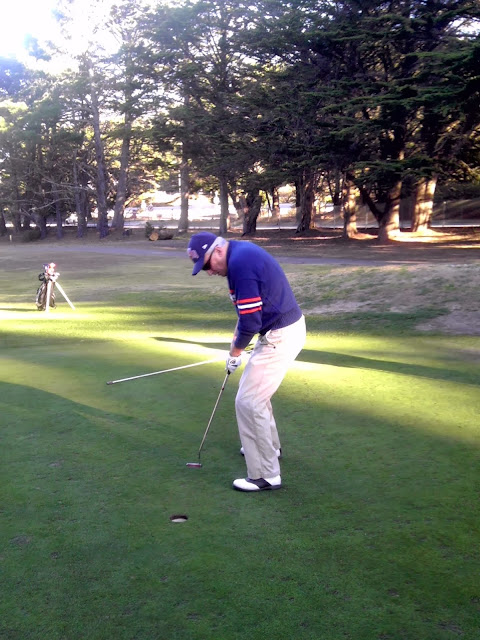 Making the putt on 3 for the second par in first three holes (the ball is in the can).

Followed immediately by a pair of snowmen on 4 & 5

Roy out of the trap on 3 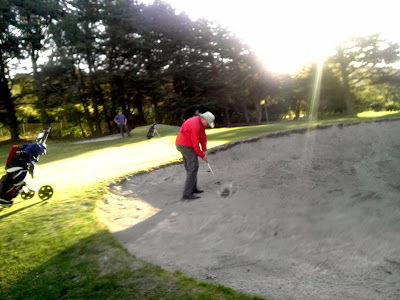 While I wait to sink my 2nd par putt in the first three holes.

Team Erickson tees off on 3 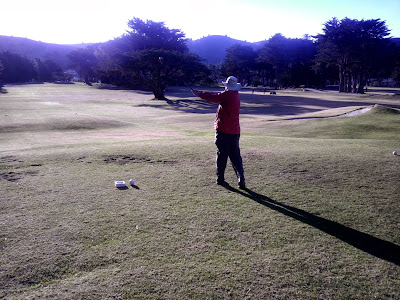 After failing to document my par on two. 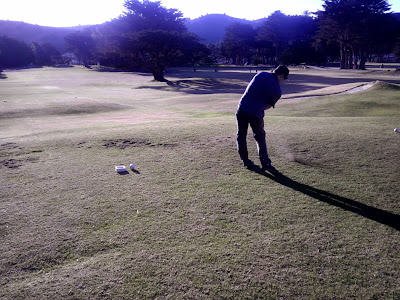 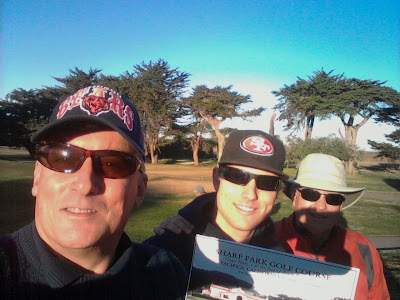 Playing with Roy and Steven for my inaugural return to an 18-hole course. The doc cleared me last month for swinging low irons, so that's the plan for today.

For those of you on my bad golfer distribution list and are wondering about the invite, it is not my fault.  Roy set this up, and an unreliable golfer bagged out at the last minute.

Gorgeous day at Sharp. Sunny, dry, fast... unheard of this time of year. 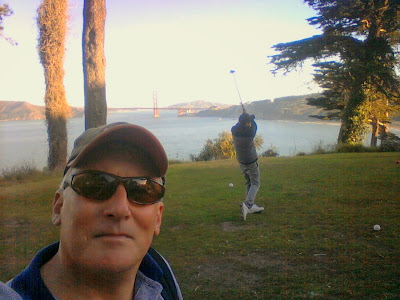 I've been hitting the driving range for a couple of weeks. Thought it was time to get back on a course. Took my reconstructed shoulder out to Lincoln for an early back nine. 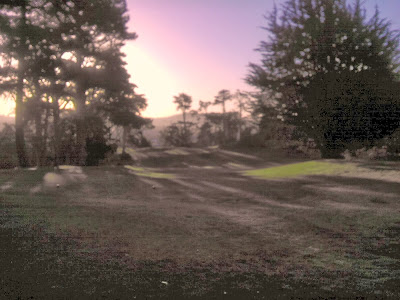 Beautiful morning. So far there is no evidence that my swing, score, or mental attitude toward game has improved in any discernible way. 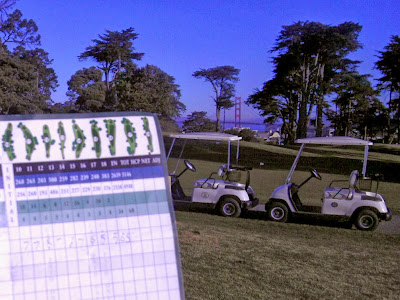 
Underwhelmed by the book, I was not particularly interested in shelling out good money to see "Cloud Atlas" in the theaters. Now that it is available "On Demand" with our HBO subscription, I finally got around to it.

I had another reason for watching the movie. When I was serving on the homeowner association board, we  were contacted by the movie production company requesting permission to use an external "set up" shot of the building in the movie. We thought the request a bit odd, as anyone can photograph a building from the outside. Regardless, after reviewing the cast, we requested a direct negotiation with Halle Berry. Alas it was not to be.  We agreed to the shot and they paid the association a little money which we contributed to the Wounded Warrior project.

So... About 14 1/2 minutes into the movie our building makes a brief cameo appearance. I watched on the PC so I could do a screen capture and post it here (see top of page). The title on the screen is "San Francisco, 1973". For locals of a certain age, there is an obvious mistake in the shot. Yes, the Summit building was here (completed in '65), and yes the Transamerica building was here (completed in in '72). However, the Bay Bridge suspension cable lights featured in the shot were not installed until the bridge's 50 year anniversary in 1986.  There are surely more mistakes, I suspect the Embarcadero Freeway would have been visible in this shot in 1973.


The two words most frequently associated with this pretentious piece of crap during its theatrical release was "Oscar bait". At least, for once,  the Academy did not take the bait.

The funny thing is I like every actor in the movie. I mean - Tom Hanks, Halle Berry, Hugo Weaving, Ben Whishaw, Susan Sarandon, Jim Broadbent, Hugh Grant.  What's not to like?  And I like almost everything the Wachowski's have ever done. And I enjoy epic science fiction with time/space bending narratives. So what went wrong? Two things.

First - Tom Hanks. Look. I hope Tom Hanks wins an Oscar for "Captain Phillips".   In that flick, the actor disappeared into the role. A great, believable performance. But in "Cloud Atlas" all I could see is Tom Hanks in bad makeup with laughably phony ridiculous accents. He was a continuous distraction.

Second - The book. Nothing can get past the source material here. The new age-ish, "we are all connected" , "reincarnation until you get it right" karmic mysticism was hard to swallow. This is a movie and book that demands you appreciate that it has something VERY IMPORTANT to say about the HUMAN CONDITION, LIFE, THE UNIVERSE, and EVERYTHING.  If instead it comes across as a load of pretentious horseshit, well - the movie is just not going to work for you. It didn't work for me.

On a positive note, the Wachowskis came through with a visually sumptuous CGI ride. And that, at least, gives the movie one unique distinction. It is the rare movie that is better than the book it is based on. The movie is bad. The book is worse.
Posted by mw at 5:16 PM 5 comments:

The Reader may recall I underwent shoulder surgery last July to repair a rotator cuff injury sustained in a sailing mishap. Five months of rehabilitation therapy later, I sent this e-mail to my surgeon and physical therapist regarding current status and expectations:

My next appointment is at the end of the year, but thought I'd provide an update between appointments. As you might recall, one of my objectives was to use my heretofore unused abalone fishing license before the season ended November 30. At my last (11/5) appointment, you suggested that it was still a little early to rope down the hill and get in the water. Well, I waited until the last possible minute in the season and ocean conditions were just too good to pass up. Besides, my Doctor of Physical Therapy (Sasha at Golden Gate PT - also cc'd) offered contradictory advice. Net net - limit out and no problems. Some pics and details linked here:

As you may recall, when we started the rehab after the shoulder surgery, I had three objectives. 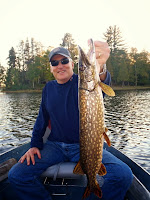 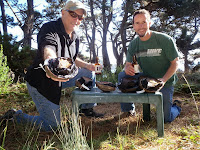 So far so good, but now your greatest, most difficult objective lies ahead. I am about to embark on the most dangerous game for me physically and psychologically:

This is going to be very challenging for you, my medical support team, as I rarely broke 100 before the injury. However I distinctly recall you suggesting that I can expect my game to improve with my new slow careful swing immediately upon returning to the game.

Just sayin' - You have your work cut out for you.

Great news. I would say with regards to January:
Dr. Bill