Ganges River - Wash those sins away. 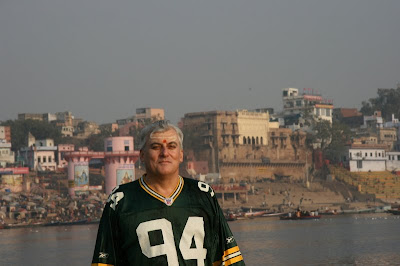 MW: "I won't be coming here again. I have one chance to wash all my sins away by bathing in the Ganges. Why wouldn't I take that opportunity?"

Darwhun: "The water is very polluted."

MW: "You have bathed in the Ganges, have you not?"

Darwhun: "Yes, many times. But only when my mother visits Varanasi and makes me go with her. She is very religious."

MW: "All these people bathe here every day. It can't be too bad."

Darwhun shakes his head: "Well, maybe the other side of the river. It is not so polluted over there."

We were in a skiff in the middle of Ganges River watching pilgrims bathe all along the Varanasi shore. I was ready, with swim trunks under my pants, and the jersey in the pack.

I couldn't go into the full reason why I was compelled to take this action with our local guide Dharwhun, but will share the full story with The Reader now. Due to incompetent coaching by Lovie Smith, I lost a wager to my Green Bay backing nephew in a head to head match-up with my Bears last season. Under the terms of the wager, he demanded I wear a Green Bay Packer jersey in a photograph in front of the Taj Mahal. I was desperate. What greater sin is there for a life-long Chicago Bear fan? Here was the answer:


Hindus believe that the water from the Ganga can cleanse a person's soul of all past sins, and that it can also cure the ill."

The jersey has been exorcised by the power of the river.

My soul is clean. 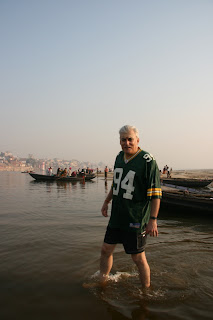 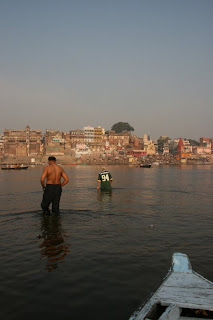 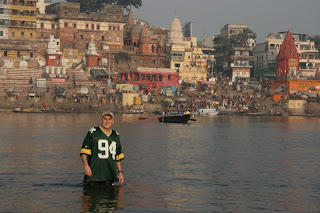 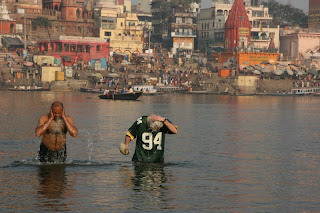 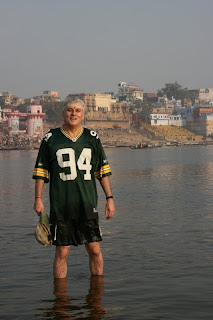 In the immortal words of Carl Spackler - "So I've got that going for me. Which is nice."

UPDATE February 7 2011: Yeah... I really didn't think this thing through. The very next season, almost one year to the day...


"Capping one of the greatest postseasons for any quarterback, Rodgers led the Pack to their first NFL championship in 14 years Sunday, 31-25 over the Pittsburgh Steelers. They reclaimed the Vince Lombardi Trophy, named for their legendary coach who won the first two Super Bowls and is making his own star turn in New York in the play named after him."

A blessing upon the Packers. This should bring good fortune and a division title next year. Dhanyavad.

whats on your forehead?

The mark on my forehead is called a Tilaka. A shaman placed in on my forehead with a sandalwood paste when blessing me before my soul cleansing dip in Mother Ganga. This particular design is for followers of Shiva - But then, as a long standing member of the Illuminati, you would already know that. Why do you pretend to be ignorant of the fact that Shiva, the god of chaos and creative destruction, is the patron god of the Discordians who have long opposed the Illuminati? fnord.

BTW - I am noticing a striking number of synchronistic events related to Shiva on this trip, which leads me to to believe that Shiva is indeed traveling with us.

Shiva is not a Packer fan.