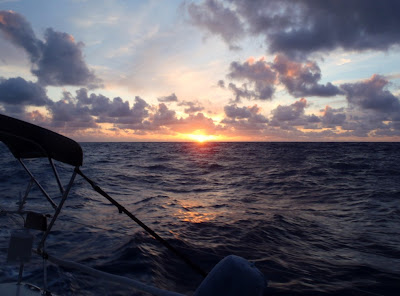 A 206 nautical mile day. This was our best mileage day by far and a big day by either cruising or racing benchmarks. Tomorrow will mark seven full days since we set sail from Sint. Maarten. If we maintain anything close to today's pace, we will also hit the mid-point in mileage by Happy Hour on May Day. It will be close.

As Bob was about to relieve Kim on the morning watch, she spotted another sail in close proximity. A visual mid-ocean sighting of another sail boat on a long passage is a rare event. AIS informed us this was the yawl Galileo. This is the second one we have seen on this passage, both spotted while on a collision course within 5 nm during Kim's watch. The Captain was considering calling for a formal inquiry into this unusual coincidence. He even assigned prosecutorial and defense responsibilities for an expedited hearing of Kim's performance on watch where he would be sitting in judgment. Inexplicably, the Captain canceled the inquiry and vacated the charges as opening statements were read.

We sailed in formation in visual range with Galileo most of the day until the larger boat pulled away when we reefed the mainsail for the night.

I am at loss to explain the Captain's rationale for cancelling the inquiry. This may be indicative of a bigger problem we have on board. Let me be clear - I am not advocating any mutinous thoughts or actions on the part of the crew. However, I do find it disconcerting that Jim has taken to pacing up and down in the cabin, rolling ball bearings around in his hand while muttering something about about breadfruit. I don't even know what a breadfruit is. Look, there has been nothing to report that would justify any action at this point. Strapping Bob to the mainmast and administering a punitive flogging was entirely justified in my mind. In fact - the five lashes with a cat-o-nine-tails was rather lenient. I am just saying that his recent behavior bears close scrutiny. Consider this transcript from the radio communication when we were hailed by Galileo:

WTF! I MEAN WTF!! This is a bigger faster boat, and our captain just committed our crew to buying drinks for the entire crew of the Galileo! Without consulting or informing the crew! We have no idea how many crew members are aboard that fracking Winnebago! I may need to take out a second mortgage to finance this drink liability. Again - I don't want to jump to conclusions here... but I would not be surprised to see some crew members jump ship as soon as we are in sight of land - just to avoid this crushing financial obligation and stay clear of the Galileo crew while we are in port.


EDITED (10-May): Have begun process of adding pics to passage posts while in port at Horta
Posted by mw at 12:48 PM

Email ThisBlogThis!Share to TwitterShare to FacebookShare to Pinterest
Labels: Atlantic, Morpheus, Morpheus Atlantic Passage, Sailing
Location: Some where in the Atlantic