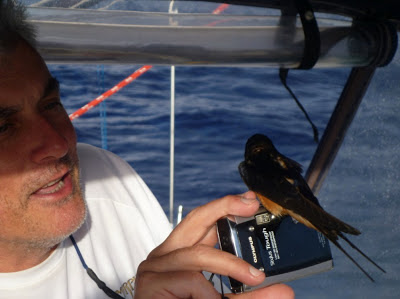 With Morpheus under sail again - two events were nominated for Most Interesting And/Or Surprising Event of the last 24 Hours.

A dramatic squall line formed off the port quarter and commanded the crew's attention in the morning hours. Low, dark, gray, with the well defined sculpted wedge formation characteristic of a cold front. 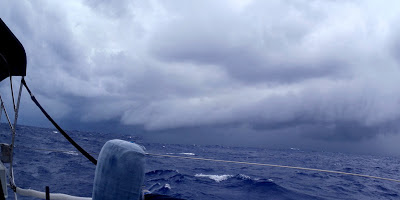 It looked like we might finally be passing from the sunny and warm Caribbean-like clime we have enjoyed thus far to something cooler, cloudier, grayer, and more in keeping with our expectations of an Atlantic passage. We got the rain, we got the wind, and we even started to get a bit cold, but a few hours later it was again sunshine, blue skies, and sunscreen. After the squall line passed we tacked - and after four days on starboard tack, we are now getting accustomed to Morpheus leaning on a more liberal tack. 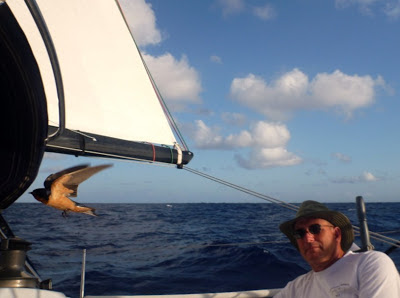 Five minutes before cocktail hour Bob was buzzed repeatedly by a small bird. As the crew assembled in the cockpit to discuss the day's events, the bird continued to circle and finally landed under the dodger. 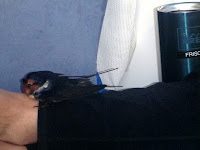 Wren sized, bluish, with a split tail and burnt orange breast feathers, I'm guessing either a swallow or flycatcher. Definitely not a seabird. How he came to aboard the Morpheus 400 nm out to sea is a mystery. The bird was clearly in distress. It either had no fear of humans or was too exhausted to care. 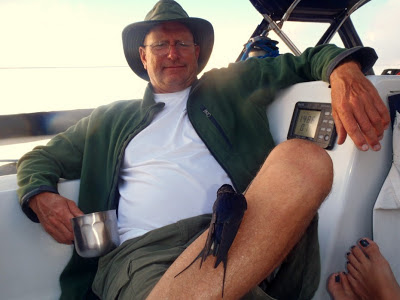 He hopped from dodger to knee to shoulder to head, made the rounds of each of the crew and even perched on my finger for a while. 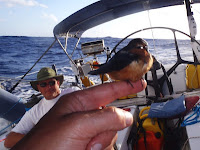 After a few more circles around the boat he settled in under the dodger and kept us company during cocktail hour. We tried to help it restore some energy with water and sunflower seeds. Jim shaped a towel into a protective nest under the dodger and put the bird in it for the night. 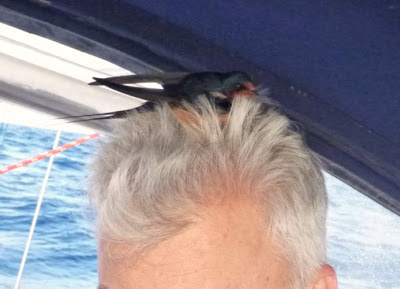 Alas - it did not survive the night and was buried at sea in the morning.

In other news - I am receiving a lot of unjustified and wholly inappropriate complaints about my coffee from the whiners aboard this boat. I'd just like to state for the record that in two previous 14 day passages, Debby never ever complained about my coffee. 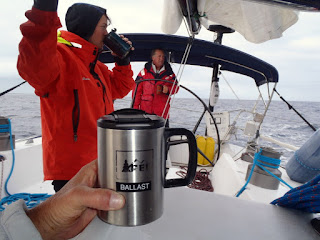