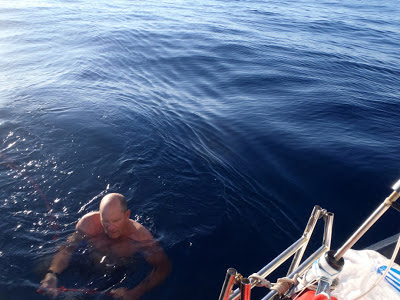 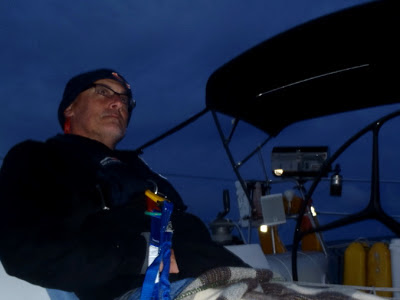 Status:
352 nautical miles to go. 135 nm traversed on Day 11 - another new daily low. As my watch ended Morpheus was managing 5 knots of headway in 5.5 knots of wind. I don't really understand how the old girl manages to putt that off, but she does.

Fishing:
Two lines in the water most of the day. No fish. Cruel joke played on fishing crew by sadistic captain attaching a water bottle to end of fishing line. Crew agrees it was not funny. 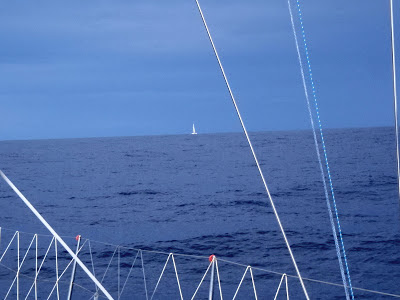 Quote of the Day:
Mid-afternoon on deck. Morpheus is under sail making 4 knots in very light winds. Captain and crew wistfully watch a catamaran with lowered sail motor past on their way to the Azores. 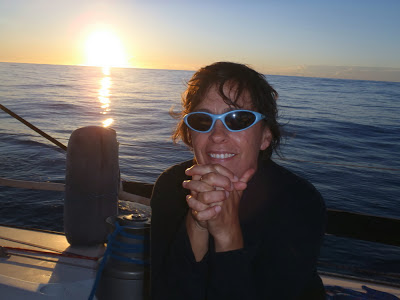 I guess he did.

Highlight of the Day: Bob's Swim
As Morpheus drifted along at 2 knots during the daily Happy Hour, the crew was consumed by a discussion of the great questions outlined in yesterday's post.  Bob took matters into his own hands, stripped down to his swim trunks, said "I can swim faster than this!" and literally jumped ship.


With a strong swimming stroke he struck off for the Azores.

As he passed the bow of the Morpheus the captain begged him to return - "Bob! Please come back! I'll turn on the engine!" Hearing this, he pulled up, completed his lap of the boat, and climbed back aboard. 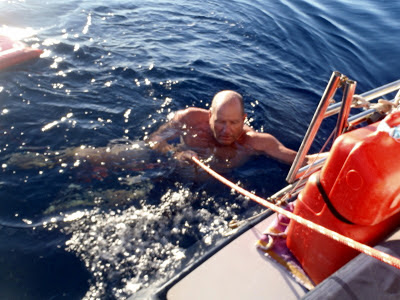 One question was answered. We would look for wind. The engine was started and we were off. "We will run the port tank dry." says Captain Jim. Over/Under wagering on the engine cutoff from fuel starvation was set at 8:00 PM. Betting was evenly matched.

The over won. When I came on watch at 1:00 AM the engine was still running. Nobody understands why. The best guess is that Morpheus has somehow learned to motor using seawater as fuel. As of this moment - it never ran out. The engine was shut down and we we started sailing a few minutes into my watch.

Sun is breaking. The Azores a mere two days away.

*SPECIAL NOTE:
It has come to the attention of your loyal blogger that malcontents reading the Morpheus Sailing Blog have filed complaints about the timeliness and diversity of posts on that blog. I think it worth noting that The Reader of MW Mobile Blog has filed no such similar complaints despite identical content being cross posted on both blogs.

Regarding Timeliness: The day ends at midnight. I am awakened for my watch at 1:00 AM and am off watch at 3:00 AM, at which point I faithfully record the days events for your reading pleasure. At that point the timing is out of my hands. The post is submitted to the Editorial Board for review and eventually posted at the whim of the Captain subject to the vagaries of connecting through Sailmail. It's not my fault.

Regarding Diversity: Captain and crew are regularly solicited for independent ship log entries. The results speak for themselves. I can only assume that captain and crew are more than satisfied with the completeness and journalistic truthiness of my humble efforts here. I can do no more.