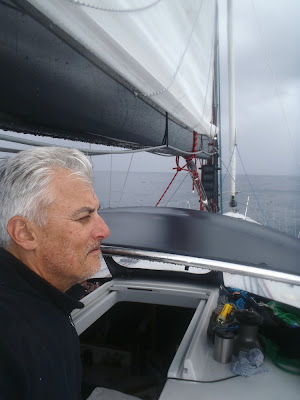 Just got off of my 1:00 AM to 3:00 AM watch. That's ship time - Atlantic Standard Time. No idea what time it really is at this longitude. 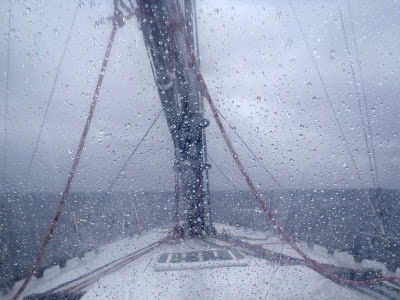 We've been sailing all night after motoring through rain most of yesterday. It was a pretty spectacular watch. We are currently on an East South Easterly heading while El Capitan tries to figure out the shifting winds.


On this heading on this watch we were sailing directly into a rising crescent moon. It threw enough light to paint a silver highway from the bow to the horizon. Clear skies and stars above, low clouds on the horizon, I watched lightning in the far distance both fore and aft. Throw in shooting stars at pre-dawn first light and it was quite the visual feast.

As noted, we were in rain most of yesterday, sometimes quite hard. That kept the crew below most of the day. 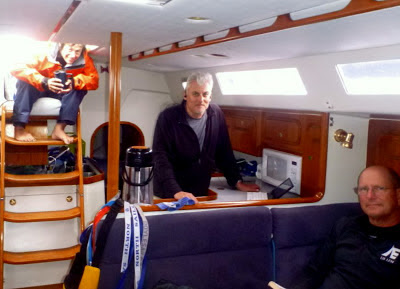 It felt more like the Atlantic Ocean we expected to see. Gray skies, gray clouds, gray sheets of rain, gray water. One might say the day offered fifty... shades... of....

Nah. Even I will not go there.

We've seen signs of increasing sea life for the first time this trip - jellies, phosphorescence, sea birds and dolphins. Although we were motoring, neither Bob or I felt like sitting in the rain to set up our lines, so no fishing today.


There was another incident of a missed ship sighting during a night watch.

I don't want to embarrass the crew member, so I won't mention her name. El Capitan has again called for a formal inquiry. Details to follow. 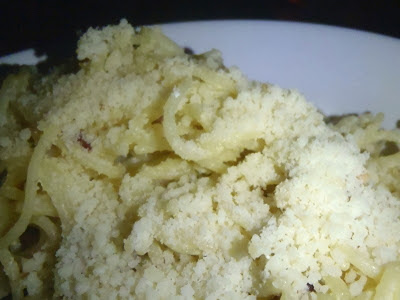 Dinner was the highlight of the day. Pasta carbonara. Bacon makes everything better.