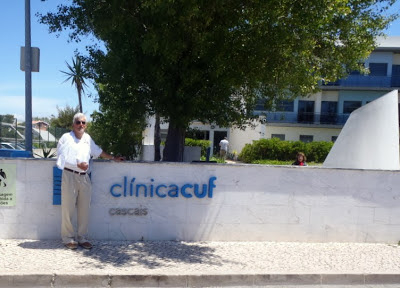 Since I've returned, The Reader has repeatedly pressured your loyal blogger for an explanation of the sling I am seen sporting in the last week of the Morpheus Atlantic passage. Frankly, I thought I'd given an adequate explanation in the blog, spelling it out in the May 17 log post:

"Bob was on watch, Kim was sleeping, Jim was watching "Boardwalk Empire" on his iPad, I was making coffee. Big wave, bad angle, water over the bow smashing into the dodger, big starboard heel. Kim woke up, Jim put down the ipad, I gave up on the coffee. A few inconsequential items took flight."

I thought that explanation more than adequate to describe the crew member identified as "ballast" at the beginning of the passage. Apparently not. So, at great personal expense, I have hired a professional artist to recreate the event with this photo-realistic rendering of a cross-section of the Morpheus on that fateful morning: 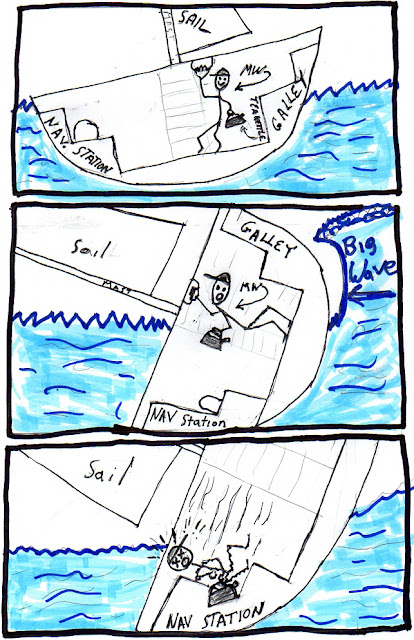 In the first panel you can see me in passageway, teakettle in hand, braced against the moderate starboard heel, on my way to retrieve water for coffee.* In the second panel a rogue wave has pushed Morpheus into a near vertical heel and the navigation station "wall" is suddenly the "floor" 5 feet below me. In the last panel gravity has done its work. I land on my shoulder and ribs. And the teakettle.

Now, I can almost hear The Reader saying "Wait a minute Mike.... I've seen movies like Mission Impossible and James Bond where Tom Cruise and Daniel Craig brace themselves horizontally above a doorway with their hands and feet while the bad guys walk underneath them unaware of their presence. You only had to hold yourself like that for a few seconds. WTF?"   True enough, but you overlooked one detail dear reader.I am holding a teakettle. I can assure you that neither Tom Cruise nor Daniel Craig could have maintained that posture if they were holding a teakettle in one hand. But I digress.

Bob was appointed as ship's doctor based on the three minutes he spent studying shoulder injuries in the medical first aid kit. After sadistically making me move my arm into various painful configurations he diagnosed a sprained shoulder with a bruised rib and prescribed IBU 800's.

We sacrificed a tee shirt for a makeshift sling and I returned to duty for my watch.

Not that I doubted his diagnosis, but I only wore the sling to keep myself from doing any more damage until I could get a real doctor to take a look at it. The first opportunity for that was four days later in Cascais.

Portugal has a two track medical system. If I was willing to wait for five hours in a public hospital I could have availed myself of the free socialized medical system. Instead I went to a private clinic that charged for their services. Bob accompanied me, presumably in an attempt to avoid a malpractice suit.

It was  a very efficient operation. You take a number upon entering the urgent care waiting room, much like a deli in Chicago. Screens throughout the clinic guide you to your next stop. Long short - I saw two doctors including an orthopedic surgeon, had shoulder and ribs x-rayed, was fitted with a real sling and was out in about three hours. Total cost - 230 euros.

Diagnosis:  nothing broken - no dislocation or separation. The orthopedic surgeon was certain it was a torn rotator cuff and was prepared to schedule more tests and surgery. I considered it. If the surgery was significantly less than my insurance deductible in the U.S,  Sigrid could fly over on the difference and we might get a free Portugal holiday out of it.  I even had the doc send me a bid for the surgery.

Common sense prevailed.  I decided to return to EssEff for any additional treatment, and was remanded back into the care of Doctor Bob.  He prescribed cheese and wine at a sidewalk cafe. 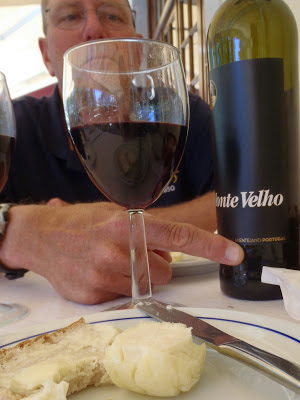 * There is an important liability question implied here. Exactly who's idea was it to move the filtered water from the faucet in the galley to the sink in the head?
Posted by mw at 11:35 AM

As the provider of the "ballast" meme, it should come as no surprise that my first comment re the sling incident documentary illustrated above is "but what about any damage to the teakettle?.

As a former golf partner, my second question is whether the healing process will strengthen and foster a better downswing so you can keep your head down and stop opening your club face, Slice King.

There's no denying the huge negative impact this will have on our showing at Sharp Park.

You'll be relieved to learn that the teakettle received only superficial damaage after being subjected to a smashing blow by my ribcage.

I actually suspect that I will be so conscious of babying my swing when I do return to course, that is likely my score will drop dramatically. The only question is whether I will be able to contain myself to a new smooth, slow controlled swing once I am feeling more confident.

@Rick,
No worries. I will be coaching the team to victory.

To paraphrase a mentor of Captain Gregory's "Hey Ballast. C'mere. Listen up. Now, the way it works shipboard is, you do your job. You do it good, you get a better job. Maybe you get promoted from ballast to swab." But you wont get promoted if you forget to always keep one hand for you and one for the ship. It was I brother Bob that made the great suggestion after years of drinking 90 degree water. The captain thought it was a fine suggestion. That it may have had any part in your injury i am sorry. As it happened in international waters this may be a matter for the world court.