MW Ship's Log May 17 - Catch a wave and you're standing on top of the world. 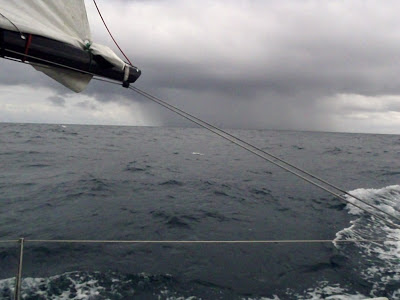 Status:
164 nm traversed on Day 2 of the Sao Miguel => Cascais passage. Most of the day was double reef and no jib. 435 nm to our destination. Second verse - same as the first. A little bit louder and a little bit worse. 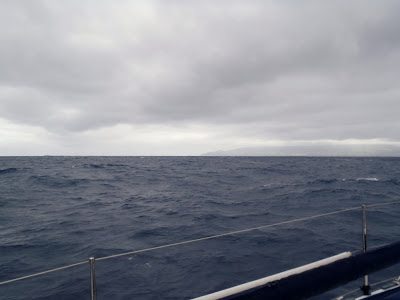 Not sure what pictures I can post here when we get back back on the internet. I mean... How many pictures of gray sky with gray water crashing over the bow and splattering the dodger can The Reader look at?

There is one picture I will certainly post - an interesting screen shot from the Nav Station computer.
The image shows current weather superimposed on our route from Sao Miguel to Portugal. We are midway between a high pressure zone behind us and a low pressure zone above our destination. Since the high rotates clockwise and the low rotates counter-clockwise we are exactly in the spot where winds from both systems superimpose and reinforce each other. Which goes a long way to explaining "The Wave."

Bob was on watch, Kim was sleeping, Jim was watching "Boardwalk Empire" on his iPad, I was making coffee. Big wave, bad angle, water over the bow smashing into the dodger, big starboard heel. Kim woke up, Jim put down the ipad, I gave up on the coffee. A few inconsequential items took flight.

Bob said it was 30+ knot gust with a seven foot wave height. Bob's a conservative technocrat so he is using the technical wave height measured from mid-point to crest. That would make it minimum 14 foot from trough to crest. Jim said it was the biggest wave of the passage, and perhaps one of Morpheus biggest wave events in years. Kim said "It's not the size, it's the angle." Not going there. Factoring all of these opinions, I would place the actual wave height as between 80 and 100 feet on my truthiness blogging scale. 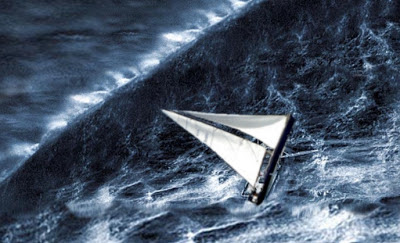 At least it gave us something to talk and blog about on an otherwise unremarkable day of sailing with a tough slog through confused conditions.

By the night watch the wind settled a bit, skies cleared, and the stars were back. We have hope for a clear day and good sailing in the daylight.

Quote of the Day 2:
Mike's on watch, opens the hatch and asks if someone called him.
Kim: "No. We're talking about you. Close the hatch."
Mike closes hatch.