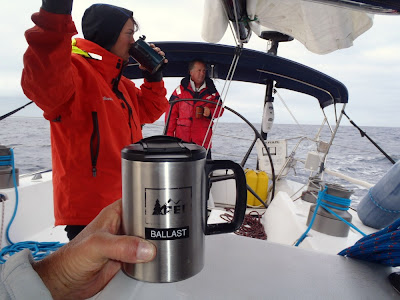 Our overnight approach to the Port of Horta can best be described as slow and steady. Winds were still up and still from the wrong direction. There was no possibility of arriving before dark, so Morpheus was tuned for a slow slow approach to the port with a combination of motor and sail. Despite 20+ knot gusts Otto the autopilot maintained boat speed of 5 knots or less. Not easy to do with a frisky boat like Morpheus and a captain who equates slow sailing with torture. 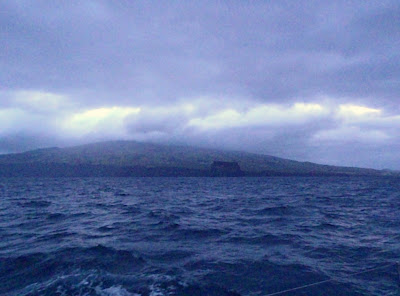 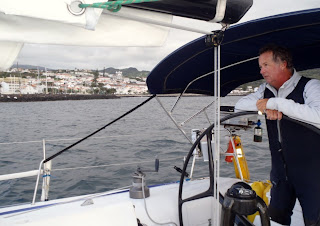 At dawn we were two miles from land. By 5:00 AM ship time (9:00 AM local time - yes we finally switched over) we were tied up at the dock and enjoying a celebratory beer while Jim navigated the local bureaucracy. 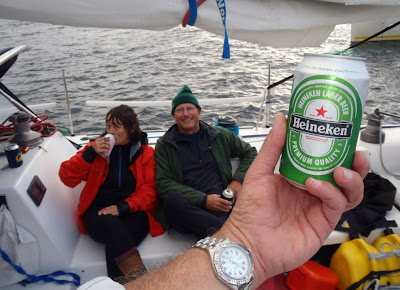 Then into town for lunch and drinks. First (and last) stop of the day was Peter's Sports Cafe. Peter's is a sailing institution and a mandatory first stop. 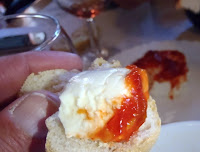 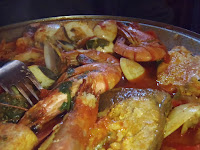 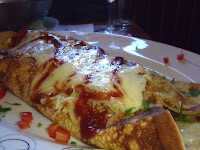 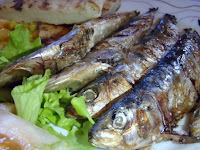 On the way back to the boat, Bob noticed a sailboat pulling into port flying the yellow quarantine flag.  Th Q flag is mandated for all boats that have not yet passed through customs. It was the Galileo. The very boat that passed us at sea on April 30 and hailed us with an ill advised wager regarding first boat to Horta.

To see Galileo, a bigger faster boat, arriving later than us was surprising to say the least. But since they were clearly arriving after us... well... I felt compelled to walk down the dock and welcome them to Horta. 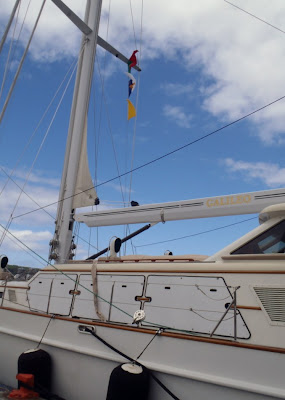 As I approach the boat I catch the attention of a young deck hand cleaning up and nod in his general direction. The dockside conversation goes something like this:

MW gesturing at Morpheus logo on shirt : "Hi. I'm from Morpheus. We met you at sea a few days ago."
Deck hand stands up and looks. Pause. "Oh yeah. That was the engineer. I'll get him for you."


MW: "That's the Q Flag flying there is it not?"
Engineer: "Yes it is. We have the bubonic plague aboard."
MW laughs pleasantly: "That means you are still restricted to the boat until passing customs"
Engineer: "Yes."
MW nods sagely: "I am standing on the dock."
Engineer: "I see that. We were delayed sailing a search pattern."
MW:  "Looking forward to seeing you in town."

Fast forward a few hours. We have just finished a fine dinner at Medalhas. A charming rustic eatery we found on a side street described as "Taberna & Casa De Pasto".

Before heading back to the boat we decide to walk back up the hill to Pete's for a nightcap. And who should we see as we walk in the door?  Why - It's the entire crew of the Galileo!

Cheers from the Morpheus crew and and groans from the Galileo engineer. After some intros and good natured ribbing, we compare notes and get the rest of the story, including this exchange:


Galileo Engineer: "You guys were really hauling ass out there. We couldn't believe how fast you were sailing. How big is the Morpheus? sixty - seventy feet?"

Captain Jim (looking like the cat that swallowed the canary) with his Quote of The Day: "No - Just fifty feet."

Long story short - It turns out that there was an EPERB distress signal from a small sailboat and Galileo diverted for several days to search for survivors. They offered to buy drinks per the terms of the wager, but under the circumstances, we could not accept.

On a more serious note. Galileo's diversion reminds us that, despite our great conditions and good luck on the passage thus far, the Atlantic is not to be trifled with. Here is the story about the search for the French boat that diverted Galileo:

"Grain de Soleil", a French sailboat (33 feet sky blue hull) and its three sailors have gone missing 500 Miles South West of the Azores. They set of their distress beacon on April 24th. The search and rescue operation was initiated as soon as the beacon’s signal was received. Planes flew over the zone and ships in the area were notified. The yacht was sailing from the Caribbean to Brittany, it seems the crew are either in a life-raft or under jury rig. On April 27th the beacon gave a last position signal.

The calculated drifting zone from May 6th is:

Two other boats may also have gone missing in the same zone having been hit by the same storm (neither have distress beacons)."

That was not our only brush with some nearby unfortunate events at sea. A few nights ago we were passed by the passenger ship New Amsterdam. After doing some research about the lost French boat, we also learned the New Amsterdam was carrying two sailors picked up after when their sailboat found trouble in the same seas we were sailing.

"Two men on a disabled sailboat have been rescued by the cruise ship ms Nieuw Amsterdam. Hearing a mayday signal, the cruise ship diverted from its course to save the sailboat’s crew in a nighttime rescue.  “It is a time-honored law of the sea that any ship in the vicinity should render assistance to a vessel in distress that has issued a call for help,” said Richard Meadows, Holland America Line’s executive vice president of sales, marketing and guest programs."

Sobering. Well. Not literally. But I digress.

The reality is that a journey of this nature requires a properly equipped and well maintained boat you can trust as well as a captain that knows its capabilities intimately and makes right decisions. With that, you may not need good luck, but you still need to avoid bad luck.   It also helps to have a guardian angel like Gibb obsessing over waves weather and wind conditions with continuous updates via sail mail.

We are fortunate to have all of the above this passage.
Posted by mw at 11:13 PM

Sounds like you are getting the Full E-Ticket Ride. Love the winning bet and resulting gallantry.

Michael - I know you expected nothing less. You know from my golfing wagers that I am generous to a fault.