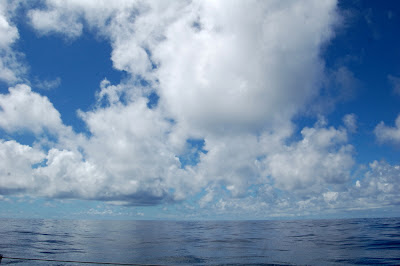 Status:
223 nautical miles to go. 146 nm traversed on Day 12. We motored most of yesterday. After a couple of false starts we shut off the engine around 10 PM Monday. Sailing since.

Fishing:
One line (rod & reel) in the water most of the day. Multiple lures. Tried deep, shallow, close, far, big, small, plugs and featheries. No fish. 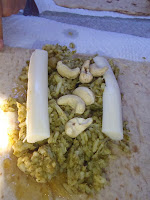 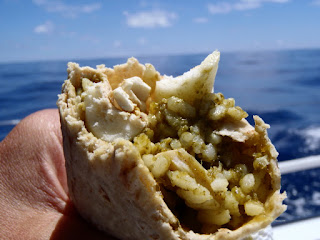 Dinner:
Last night it was Deb's Jumbalaya. We are not worthy. Reprised with jumbalya wraps with almonds and cheese for today's lunch.

The Mystery of the Port Fuel Tank:
The reader may recall when captain and crew decided at 5:00 PM Sunday to motor looking for wind using the last of the fuel in the port tank. The expectation was that the remaining 4 gallons in that tank would take us until 8:00 - 9:00 PM that night (Sunday). As noted above, at 10:00 PM the following night (Monday), the engine was turned off and we resumed sailing. We were motoring in all of the intervening 28 hours except for about 3 hours during my watch Monday morning. Apparently there is still fuel in the port tank. When we turn the engine on again it will still be running off of the port fuel tank. 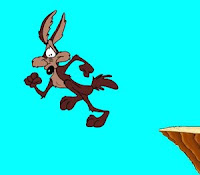 The only explanation is that Morpheus is operating in "Wile E. Coyote" mode.   You know... like the scene in the road runner cartoons where he runs full speed off the edge of the cliff but stays suspended in the air and  keeps running for as long as he does not notice that there is no cliff beneath his feet.

Morpheus apparently does not know the port tank is empty. None of us are mentioning out loud that the port tank is completely out of gas while we are in earshot of Otto the autopilot.The motor grumbles on.

Thanks to the abiding mystery of the port fuel tank, it currently looks like a late arrival in Horta tomorrow.