Things we have learned about how to not catch fish from Morpheus. 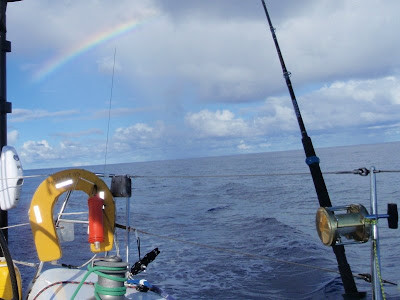 As noted in prior posts, we have had two lines in the water almost continuously since leaving Hawaii. Over the course of journey so far, we have gleaned some valuable lessons on how to not catch fish from the Morpheus. For the benefit of future sailors on the Morpheus who intend to invest time, money and effort fishing from the Morpheus in an ocean that is filled with fish, but would like to avoid the messy business of actually catching anything, we offer these helpful tips. 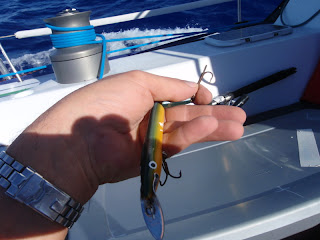 1) USE LURES WITH CORRODED OLD HOOKS.
On day two Jim decided to put a Rapala lure on the hand line. It looked like a brand new lure, but has spent some time in the tackle box as the hooks were a bit rusty and corroded. After a day in the water, the Rapala emerged with bite marks all over the body of the lure, and points broken off the corroded treble hook. 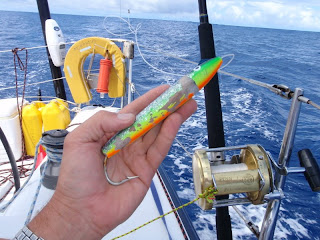 2) BUY EXPENSIVE LURES PAINTED LIKE A FISH THAT DOES NOT ACTUALLY LIVE IN THE PACIFIC OCEAN.
On day one I fished with a lure I purchased at Hi's Tackle Box in San Francisco. It is a cedar plug painted like a Rainbow Trout. The local aquatic denizens were greatly amused.

3) AT THE END OF THE DAY, REMOVE YOUR LINE FROM THE WATER IMMEDIATELY BEFORE FISH START JUMPING BEHIND THE BOAT.
This just happened. I interrupted writing this post to go on deck and reel in the rig we have had in the water all day. As I was unhooking the retrieved squid lure to put back in the box, I looked up to see a three foot dorado jump right behind the boat where the lure was moments ago.

4) USE THE SQUID LURE.
It is friggin' useless. 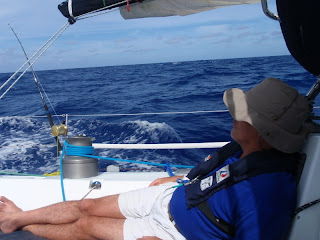 5) HOOK A FISH THAT IS BIGGER THAN MORPHEUS.
Well we don't actually know big the fish was, as we did not get a good look at it. It may only have been as big as Morpheus is wide. We only saw a hint of the fish and the tsunami it triggered when crashing back into the water about 100 yards behind the boat. It may have been more than 100 yards back even at the time of the jump. If Chris is reading this blog, I would be curious to know the test strength and length of line he had on the big brass reel. I am guessing it had several hundred yards of 75 lb test. Note the use of past tense. But I am getting ahead of myself.

This happened yesterday. I used an overpriced big black brute of lure that I also purchased at Hi's Tackle Box. You can see a picture of it if you look back on my blog to the posts shortly before leaving for Hawaii. The staff at Hi's told me it was a Wahoo lure. It was affixed to Chris' rig by a fifteen foot titanium leader, also purchased at Hi's, which they assured me I needed if I intended to catch a fish with teeth. It is shocking what has happened to the price of commodities like titanium during the Bush administration. But I digress.

I spent the morning at my usual post reclining in the cockpit with my back slouching against the bulkhead, hat pulled down to eye level so I can focus with intense concentration on the action of the rod in the holder and the line in the water. By the way - I have independent confirmation that I was at my post fishing, as Debbie took a picture of me there, apparently under the mistaken impression that I was sleeping. Nothing could be further from the truth. I was concentrating. I will update this post with said picture later as evidence.

Of course, no one can maintain that level of intense concentration indefinitely. After several hours I decided to take the action that all fishermen know is guaranteed to bring fish. I went below and made myself systematically unprepared for a fish to be on the line. I removed my safety harness and put it away. I booted my laptop and rendered my camera inoperable by beginning to download photo's. I stuffed a sandwich in my mouth. At that exact moment - I heard the scream of the drag on the reel and Jim called out "Fish on!" My plan was working perfectly. 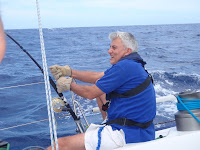 By the time I got the safety harness back on and made my way to the rig, we had seen the end of the jump, and 3/4 of the reel had already spooled out. (JG's comment in previous post: "This was the biggest fish ever!! Seriously, ESPN Big Game Fishing Stuff! HUGE!") I slid the drag to the maximum level "strike", but to my chagrin, the reel continued to spool out. There was very little line left on the reel. Scott handed me the gloves, and I was able to add enough drag with my hands to stop the line from spooling out. That is the way it stayed for a while, fish on line, I am holding the line, pole bending, little line left on reel. There was no hope of reeling line in. Then the line popped and the fish was gone and all the line with it.

Then I noticed a secret button on the reel that would have permitted me to increase the drag more than I had it set. 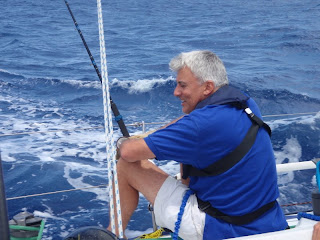 6) DON'T BOTHER TO LEARN THE EQUIPMENT YOU ARE USING UNTIL AFTER YOU HAVE MOBY DICK ON THE LINE.
I don't think it would have made a difference in the end result, but it probably would have lasted a little longer. 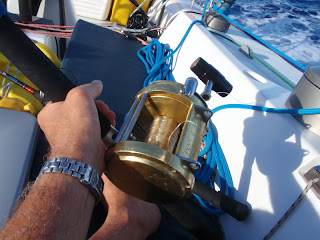 7) DO NOT BRING A BACKUP LINE. I MEAN, WHAT ARE THE ODDS OF HOOKING A FISH THAT CAN SPOOL OUT YOUR ENTIRE 75 LB. TEST LINE?
Chris has another rig on board. A much lighter open face reel. I have transferred that line to the big brass reel. It looks like the 10 lb test line that my Dad uses to catch bass and pike in Big Shag Lake. Yeah. That should work. 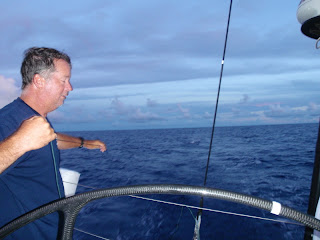 8) DON'T HOOK A FISH RIGHT AT SUNSET!!*
Jim hooked a 2ft Dorado on the hand line this evening right at Sunset. A bit late to be dealing with fish cleaning etc. Not to worry, in his rush to land this one before it also found a way to escape, he pulled the hook right out of its mouth while it was planing across the waves behind Morpheus at 7 knots.