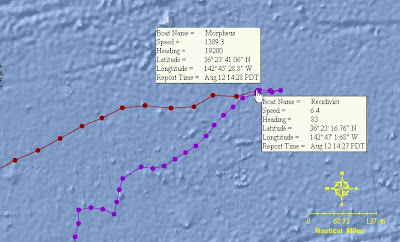 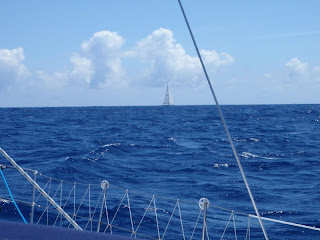 Like clockwork (an hour later than predicted) Morpheus and Recidivist sighted each other traveling in opposite directions 972 miles from San Francisco. 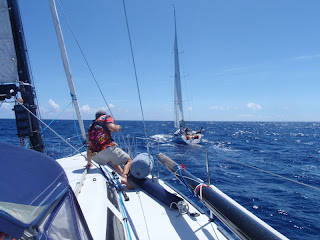 Recidivist tacked and took up a course towards San Francisco. Morpheus fell in behind and slightly to leeward. Seas were moderate and the wind was blowing 15 knots. Pretty perfect conditions for getting the required med's transferred between boats. 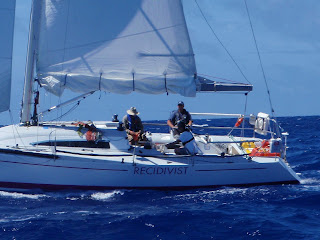 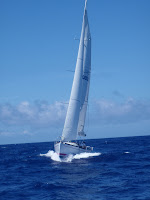 It was easy. As we pulled along side they tossed over a throw rope (those things really work!). At the end of the rope was a dry bag attached to a second rope that Recidivist controlled. Scott and Mike stuffed the drugs in the bag (well Scott did, Mike was busy taking pictures), and once closed the bag was pulled back across to Recidivist. That's it. Easy as could be and we were off again!! 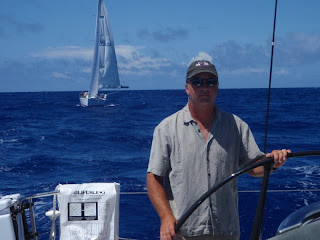 Hope they work! Nice day out here. Another one. Easy downwind VMG sailing under main and jib. Home sometime late next weekend. - Jim

MW Addendum
Once again I find I must make a correction to Jim's post. This experience has made me question his posts from any and all of his voyages where I was not on board to fact check his work. Scott did catch and manage the throw line. He then handed me the dry bag. I opened the dry bag, stuffed the drugs and resealed it. Scott released it back to the Recidivist. While I was indeed taking pictures before and after the handoff, there are no pictures during.

I don't know why Jim missed this, all he was doing was drive the boat.

Recidivist Rendezvous
That said, the whole thing came off astonishingly well. After all, this is not something that either captain or crew practices on a regular basis ever. Two boats under sail in moderate seas and 15 knots of wind - and it looked like something we do every day. Perfect navigation, perfect alignment, and a perfect transfer on the perfect first throw. Very cool.

We received a sail-mail from Recidivist a day later, saying they thought their afflicted crew member was responding to the antibiotic. I'll update if/when we hear more about what happened.

This post is a Work In Progress. I am hoping to get pictures from the Recidivist crew and will append to the post and video if/when we get them. Ideally, I'd like to post matching photos taken at comparable times from the two boats.

NOTE: While updating the voyage journal, my political blog has been lying fallow. I need to shift gears, but will try to finish updating the Morpheus delivery over the next couple of weeks.

x-posted from Morpheus Sailing Blog
Posted by mw at 3:30 PM