We catch a fish 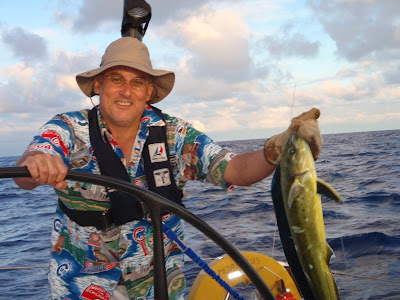 Catching the fish is admittedly old news, as Debbie and Jim have already told the story in prior posts. Still I thought our one and only fish catch was worthy of a bit more color before we move on to even more lessons on how to not catch fish from the Morpheus. Yes, we have two more lessons to divulge, but I just cannot talk about that right now. I'd rather rehash our one and only fish catch one more time.

I am admittedly a bit slow in adding details of that single catch because I was, quite frankly, intimidated by another bit of news. Via private correspondence on the boat we learned that some of these posts are being used in Mrs. Humphrey's 5th grade class as illustrations of creative writing. This certainly gives one pause. I mean, rambling on a blog about fishing, and sailing, and demon birds from hell is one thing. But helping shape the malleable young minds of the next generation is another thing all together. Shouldn't I be doing more? Shouldn't I be trying to pass along the collected wisdom of my 55 years? Or something?

When we last left off, Rule #3 of "How to not catch fish" documented a jumping Dorado/Mahi-Mahi behind the boat just after the line was reeled in. Rule #8 documented Jim actually hooking a dorado with the hand line a few minutes later, but losing it with a very sportsmanlike long distance release. By the way - for the benefit of Mrs. Humphrey's 5th Grade class - I did not actually write Rule #8. It was appended by Jim while I was on watch and shortly before he posted it to the blog. Hence, I am not responsible for the double negative of stating a rule supposedly about NOT catching fish with another negation - "Don't hook a fish right at sunset". Yes, kids - the whole thing confused me too.

The important thing, is the next morning after Deb relieved me from the sunrise watch, I put the cedar plug on the now seriously downgraded line of Chris' reel, and within 5 minutes had a two foot Dorado on the line. The call of "Fish on!" roused Jim from a sound sleep and he dragged himself up the companionway saying "This better not be a joke." With Jim and Deb's help we landed the fish. Finally. Then we sent Jim back below decks so he could preserve his illusion that filleting a fish on the transom can be accomplished without spilling a drop of blood, guts, or slime on the Morpheus. 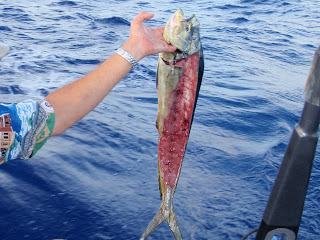 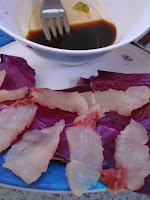 Within two hours the Morpheus delivery crew was enjoying a small appetizer plate of mahi-mahi sashimi. Within four hours we had mahi-mahi sautéed in olive oil with onion and garlic, served on a bed of rice, and drizzled with the garlic infused olive oil. There is not a lot of meat on a two foot dorado. but we were able to stretch what we had, and were left looking forward to the next fresh caught fish meal.

Alas this brings us to the unfortunate events of Sunday afternoon. But that will have to wait for a future post.

It is still too close - too painful - maybe tomorrow.

Instead, we conclude with a new series - Life Lessons for Mrs. Humphrey's 5th grade class from the crew of the Morpheus:

UPDATE:
Hmmm. Well - to keep this all in perspective - Upon my return, I learned that on the day before and the day after catching this dorado in the Pacific Ocean, my sister and brother-in-law each pulled the same size fish (a Northern Pike to specific) out of a somewhat smaller body of water in the Upper Peninsula of Michigan (Big Shag Lake). 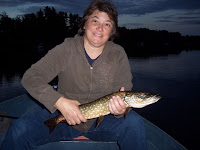 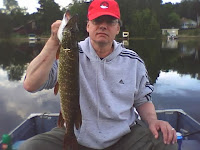 Enjoying reading your posts from the morpheus. It makes me feel like I'm sailing with you,so imagine my surprise to find Jeff and and I on the blog. Unlike fishing rules on the morpheus we could catch and did catch ours at sunset. We find it is the best fishing situation for us vampires. Never the less Bravo and Congratulations on your daytime catch!
Rac