Long periods of boredom, interrupted by a few moments of excitement. That really does describe this route home from Hawaii. You have to enjoy the journey, otherwise this would drive you crazy. To date, I think we are all enjoying the journey.

You don't know what you have until it's gone!! It's really pretty scary when you think about all the things onboard this boat that help us get home and require electricity. Ranked in my priority order...

The list goes on and on. Anyway, I'd been getting the sense that we were not getting the normal charging output from our alternator during the last charges of the race, and the first few days of the return. Nothing terrible, but things didn't seem up to spec. Two nights ago though, we started the engine with the batteries quite low and I looked at the alternator output only to see a big ZERO charging amps!!! (of course it was just about midnight) 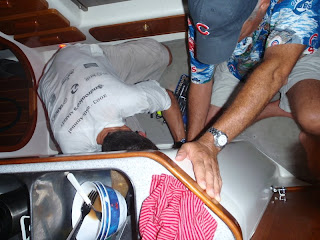 What followed was two hours of pouring over alternator and regulator manuals. Following suggested trouble shooting processes, and ultimately tracking down a broken wire that should have been connected to the alternator. Cheers of joy were probably heard for miles as we all knew that if we could not solve this, we'd be pulling a U-turn. 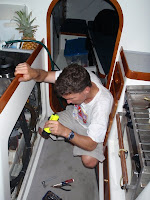 The solution seemed simple but was a bit more complex as it turned out. To reconnect the wire we needed to re-crimp a new end fitting on and reconnect to the alternator. To do that it was best to disconnect the alternator circuits from the batteries. To do that meant throwing the battery breaker, and that left us in the dark. Humm...no autopilot and no compass lights in 18 knots of wind. That could be and was interesting. We ended up with me steering and Deb holding a flashlight on the compass dome for 20 minutes while Mike and Scott took care of the repair work below.

It took two tries, but we got it right with no additional troubles. When the engine was started we ended up with about twice the charging amps as before. Perhaps we were dealing with a loose connection for some time?? 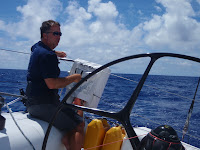 Here again is an area that has thrown us a few surprises. We've been fishing with both Chris' big ocean rod and reel, and my handline setup. To date....no fish. In fact, we've become so frustrated that Mike will soon be writing a blog post entitled..."How not to catch a fish!". We believe that we are becoming experts at this.

So far, we've lost two lures, and entire reel of fishing line, and a hook without landing a single fish.

YOU SHOULD HAVE SEEN THE ONE THAT GOT AWAY

Just to give you some idea of what you will hear from Mike, you can expect to hear all about how he used his $26 lure to hook the biggest fish ever seen by anyone on Morpheus. I'm here to tell you, he is definitely not exaggerating. This fish was huge. Absolute ESPN Big Game Fishing Channel stuff!! The thing jumped in the air shortly after being hooked and while none of us saw the fish, we did see the biggest spray of water ever as a result of a fish. There was water thrown at least 6-8 feet in air, and perhaps 10 feet across. This fish was gigantic!!!

NEED MORE NEWS OF THE WORLD

That's it for now. Expect we'll have the engine on and be making somewhat of a right turn sometime in the next 24 hours.