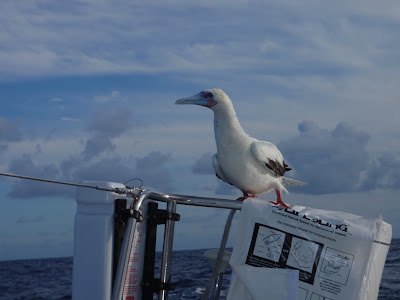 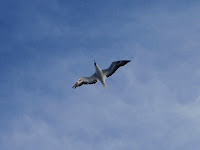 It is Scott's watch. Late afternoon. Scott is sitting in the companionway watching for squalls. Otto the autopilot is at the helm. The captain and first mate are sleeping below. I am in the cockpit, back resting on the bulkhead, facing aft, listening to Amy Winehouse "Back to Black" on the iPod, and watching a big sea bird circle the boat. 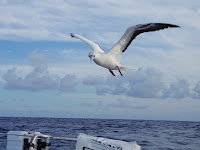 The bird corrects course in mid-air, matches the speed of the boat, swoops in just off the water from aft, and lands above the transom sitting on the rescue kit mounted to the lifeline.

So there he is, less than 10 feet away. I am looking at him. He is looking at me. We are looking at each other. The bird decides I am no threat and starts preening and grooming himself. Blue beak with orange at the base of the beak. White body with some gray. Feet are webbed, yellow orange, like a duck. [I took pictures of course, and will update this post with same when we get back to the land of the big intertubes. In the meantime feel free to ID the bird - Deb guessed from the description it is a Blue Beaked Booby.]

The bird and I stared at each other for almost 30 minutes as Morpheus pounded through the swells. Then it got weird. The bird talked. You know - like a parrot. Now I don't expect anyone to believe this, I almost didn't believe it myself. But I was there, and the bird was clear as a bell.

As I looked at the bird, I remembered the story told by the race crew of something that took place only a week or so ago, at just about this distance from Hawaii. My understanding is that Pete was at helm, and he was attacked by a large seabird. The bird dive bombed Pete several times, each sweep coming closer until the bird's wing feathers were brushing against Pete on each pass. This was no ordinary bird, as Pete swears he saw the glowing red light of malevolent evil shining out of its eye sockets. It was a demon bird, sent from the gates of Hell itself, or maybe from Hula Girl (everyone knows that Cayard sold his soul to the devil - aka Larry Ellison). Fearing for his own everlasting soul, Pete cut short his watch, and scrambled below. There he waited until he was sure that the bird had left before coming back topside.

At least, that is how Pete tells the story. It sounds a bit different when related by other members of the crew. Ask them.

But I wondered, could this be the same bird?

Finally the bird tired of my company and left, but the words emanating from his beak were still ringing in my ears. I'll admit I was shaken. That night, I could not sleep. I awoke in a cold sweat and was moved to describe the episode in verse: 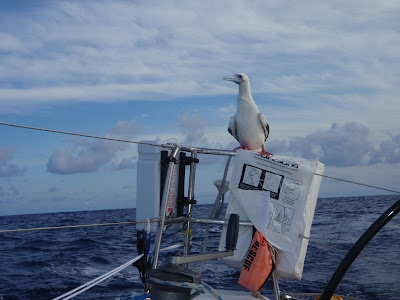 Quoth The Booby
(with apologies to Edgar Allen Poe)

Upon the Morpheus, after main sail tending,
I sat and pondered the night watch pending.
While I lounged in the 'pit - too well fed -
I heard a flapping, just above my head.
There I saw a seabird soar
Then flap and land on the transom floor.
The sun and salt spray burned my eyes,
But with no worrisome impending gybes,
we stared at each other - me and the bird so bold -
A blue beaked booby with eyes so cold.
"Tell me!" I said, "What do you seek?"

Quoth the Booby - "Where is Pete?"

you are quite a poet michael! (even if you did borrow the original.)
what a set up- has Pete seen it yet?
great story and wonderful ending. Had a good laugh to start my day. (you just added 7 years to my life.
Sister robyn
p.s yes I do read my emails.

Robyn,
Thanks. Yes - the original post on the Morpheus Sailing Blog garnered several comments - including a rebuttal by Pete.

It took me 4 1/2 years to get to this post but found it thanks to your recent most splendid round at Lincoln (99!). Well worth the wait. I agree with Robyn that you're quite a poet. Looking forward to our next round whenever that may be.