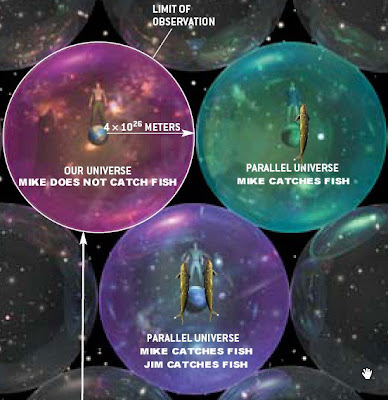 During the 2003 Tahiti to Hawaii passage, I spent many hours with Jim and Deb's sons Christopher and Patrick, sitting in the cockpit under the stars discussing theoretical physics including relativity, quantum mechanics, and the theory of parallel universes. No - really - we actually did. Sitting in a small boat with the deep blue sea below and the limitless stars above, it just seemed like the thing to do at the time. In particular I recall discussions we had about the theories positing the existence of infinite parallel universes - many only slightly different from each other - existing only a short dimensional shift from each other. For example, in one universe you may catch a fish, but in the otherwise identical universe next door you don't.

Somewhere in a nearby universe there is a photograph taken on Sunday afternoon, with Jim and I standing on the stern of the Morpheus, each holding a four foot dorado/mahi-mahi that we just landed within 20 minutes of each other. I believe that some terrible mistake has been made, and I am supposed to be living in that universe. But I don't live there. Instead I live here in this universe with you, where that photo does not exist.

This is what happened in our universe:

Jim called out "Look at that fish jump!" I looked in the direction of his outstretched hand and saw a big dorado crash back to the surface. Then behind it - another - and another - and another. "It's a school!" I said. The dorado/mahi-mahi is a beautiful fish - long lean, metallic gold green, almost like the paint job on a two tone California hot rod. It was a spectacular sight as they leaped through the calm water, sparkling in the intense mid-day sun. 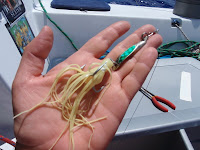 "I think they are heading for our lures." Jim said. They were. We were motoring through the Pacific high. As usual we had two lines in the water.The hand line was attached to the cedar plug. The reel with the underweight replacement line was trailing a ridiculous rube-goldberg abomination I had fashioned out of pieces from the tackle box that morning. The school was moving in the opposite direction as Morpheus, quartering in toward our wake. 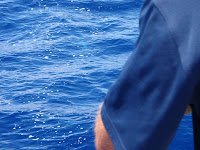 "Look." I said "That one is heading for your lure." Snap. He was on the hand line. I grabbed the line while Jim slowed the engine and put on gloves. I handed the line to Jim. The call of "Fish on!" brought Scott from below and Deb with my camera. It was a big fish. Four feet long. Well, to be precise, I'd put it closer to 3 ft. 11 inches. 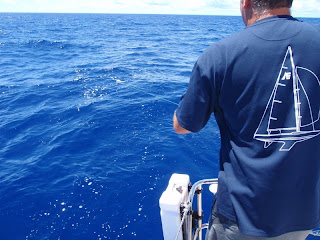 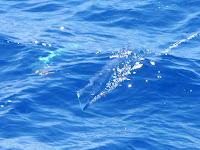 Jim slowly and methodically brought the fish closer to the boat. I stationed my self on the swimmers platform in the stern of the boat to gaff or net the fish. Unfortunately, there is neither gaff nor net on board Morpheus. I was not sure exactly what I was going to do. I knew what I should do - grab the fish under the gills. But Jim had the gloves and there were flashing teeth and a big hook, and I was not sure what I was going to do.

It is important at this point to note an obvious fact - the fisherman handling the line loses control of the fish once someone else nets or gaffs or grabs the fish or the line. Back to our story in progress. 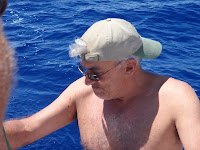 The fish was at the boat. I grabbed a stanchion with my left hand to anchor myself to the boat, reached down with my right hand, grabbed the leader in front of the fish and heaved the gold green brute out of the water. Every bit of 3 feet 11 inches. He was over the transom now, but still flopping on the hook under my straining arm. I could not grab him with my other had without releasing my hold on the boat. What to do? I tried to lift him higher and throw him over the lifeline onto the Morpheus deck. He flopped, lost the hook, bounced off the transom, and was gone. 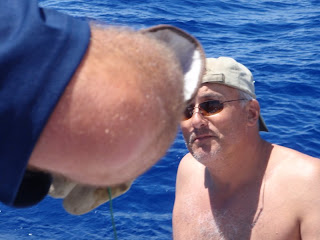 There was a long uncomfortable silence while we all looked at each other. I'd rather not describe the look that Jim was giving me. Before anything could be said, the drag on the brass reel started screaming. We had another fish on the line. 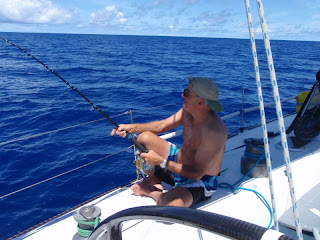 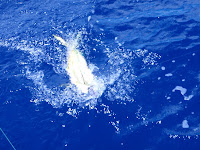 I could not get out from under that gaze fast enough and scrambled behind the brass reel in the holder on the port side. Conscious of the light test line spooling out of the reel, I babied the drag, tightening ever so slowly - the fish jumped. Another dorado. Another four footer. Well, to be precise, I'd put it closer to 4 ft. 1 inch. 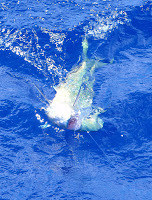 Long story short...er.. Long story not so long... I fought the fish for about 20 minutes, treating the line like a thread. The fish jumped at least six times bringing it in. Finally it rolled on its side and I could draw it slowly up on the stern. It was every bit of 4 ft. 1 in. Jim was already on the step in the transom wearing the gloves. Somewhere behind me I vaguely heard a small voice saying "Hey guys - I know how to do this. I snag fish in the delta all the time." I think it was Scott. Must have been. But I was focused on Jim. "Jim, the only way to bring it on board is grab it under the gills."

Jim said "I can grab the wire leader."

I said "Jim, the only way to bring it on board is grab it under the gills."

It is important at his point to note an obvious fact - the fisherman handling the line loses control of the fish once someone else nets or gaffs or grabs the fish or the line. Back to our story in progress.

Jim grabbed the leader and pulled the head of the fish over the transom. Then his hand slipped up the leader to the line. The fish flopped. The line broke. The fish was gone.

Both fish were caught. Both fish were brought on the boat. Both fish were "released" depending on how one interprets the "state of mind" of the fishermen and gaffers. Regardless of psychological interpretation, it was one of the most extraordinary fishing experience of my life.

That night Deb made a very nice Hamburger Helper plate for dinner. Hey, I'm not complaining. It was good. This universe that you and I are stuck in is still a pretty darn good universe, but...

They were eating fresh Mahi-Mahi on the Morpheus in that universe next door.

Update to things we have learned about how to not catch fish on Morpheus:

RULE # 9A
If your name is Jim and you have a fish on the line, have Scott and not Mike bring it on board.

RULE #9B
If your name is Mike and you have a fish on the line, have Scott and not Jim bring it on board.

ADDENDUM:
I know I am being a bit obsessive about this, but upon returning home, with a little applied theoretical physics, I was able to open a quantum tunnel into that neighboring universe. I could only maintain the portal long enough to extract this one distorted image: 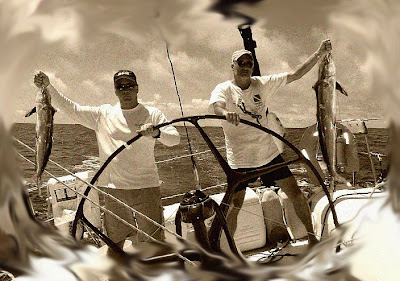 I knew it! I am sure that I am supposed to be living in that universe.
Posted by mw at 9:30 AM