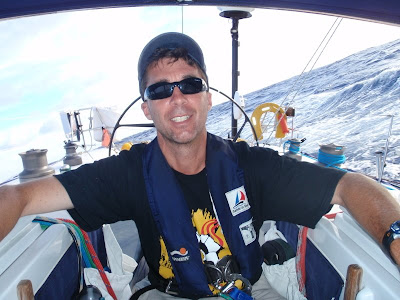 Scott on watch not being sea sick.
My first blog entry via sail mail:

We have been at sea for 48 hours 2 minutes 36 seconds as I hit the period on this sentence. We know because Scott has a stopwatch feature on his watch, and started the clock the minute we left the harbor. It is a nice watch. I have taken to asking Scott how long we have been sailing every few hours. By end of the trip I will be asking every 15 minutes. At some point I expect him to just give me his watch. I look forward to adding it to my collection.

Jim will have to update you on the specifics of course selection,speed, wind conditions, and general progress but it has been a pretty easy run so far. I'll just supplement Jim's log with some random shipboard observations. 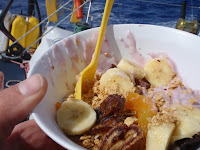 We are eating well. Generally granola or grapenuts for breakfast with yogurt, fresh bananas and dates. Our first night out Deb prepared baked chicken with a vegetable rice medley, which became a delicious chicken salad for lunch yesterday. Last night it was a Mexican style Lasagna. Which brings me to the next topic:

SEA SICKNESS
Nothing to report, no one got sick. Deb, Scott, and I all used a patch. I didn't think I would need it, but stuck one on anyway - just for the dream entertainment value. 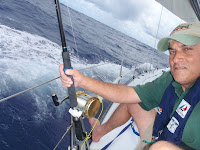 Two lines are out. One hand line and one on the pole. No nibbles yet, but that may be because Morpheus is clipping right along at 7-8 knots, and the fish can't catch up. Yesterday we had a rubbery squid on the hand line and a cedar plug painted like a rainbow trout on the pole. Shortly before taking the lines out of the water I had an Epiphany. No fish out here has ever seen a rainbow trout. Huh. Today we have the unpainted cedar plug on the pole, and a Rapala on the hand line.

SHAVING
As in - Jim and I are not. We are preparing our face warmers to fend off frostbite during the cold approach into San Francisco. Scott decided to shave and therein lies a cautionary tale. Bouncing around inside an enclosed space with sharp instruments in hand while attempting a a delicate and precise operation like shaving - well - lets just say that I am questioning Scott's judgment. No matter - No harm, No foul. And I must admit the end result is quite striking. Kind of a picasso-esque avant-garde pattern of shaved and unshaved squares across his face. Its a good look.

Post Script:
Deb wants Rob to know that he is in trouble. Something about leakage around the mast onto Deb's bed. Jim promptly threw Rob under the bus, saying it was Rob's job to repair that leak. Understandable. Rob is not here. Jim is.