Pending Rendezvous at Sea and Half Way Party 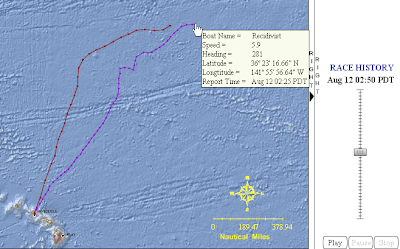 Good Morning. Celebrated passing the half way point yesterday with a few afternoon Morpheus Mai Tai's. 5:30pm cocktail hour has become a standard daily event. I think it's a nice addition to our passage routine. 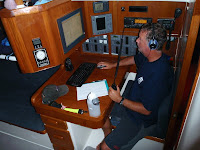 During last nights roll call, Recidivist announced that it had a crew onboard with Cellulitous (spelling?). I guess this is something that has been developing over several days and has become a big issue. Normally this is treated with Penicillin, but the crew member is allergic to that. So...an alternative drug is needed. Lucky for everyone, we have the drug they need and we were the second closest boat to them.

At 1AM this morning we agreed to a rendezvous point aprox. half way between us, and should be meeting each other at about noon today. Lucky for us, they are right on the way home. Unlucky for them, they had to turn and motor upwind in 15+ knots of wind directly away from home.Details of the exchange to follow. Who has ideas regarding the best way to pass drugs between two boats offshore in waves and 15+ knots of wind?? Send your suggestions by 11am!!

PS. Amazing to hear Steve Chamberlain of Surprise on the SSB last night during our Pacific Cup Roll Call. Steve is anchored in Tonga!!!

I think Jim gave the halfway party short shrift with this post. Some pics from the on-board festivities. 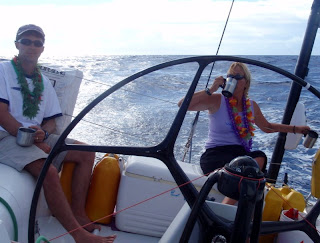 I am not saying that Deb is a two fisted drinker, but pictures don't lie. 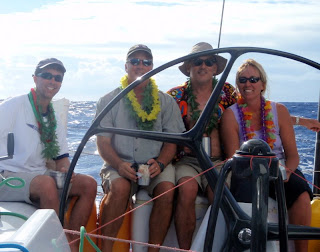 We were under sail again, so the party move to the aft.
Dinner 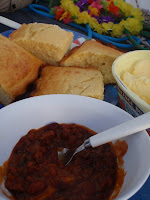 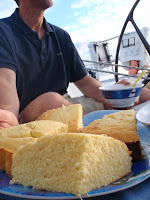 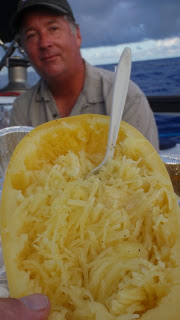 Fresh baked corn bread, chili and buttered spaghetti squash. We eat well on the Morpheus.
Other
We became concerned about the rate we were losing lures, so Jim and I had a little contest to build new lures from found materials. 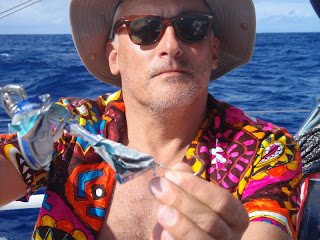 I went with a minimalist approach. My lure had everything a fish needs. D-rings for weight, a beer can flasher, and hook. 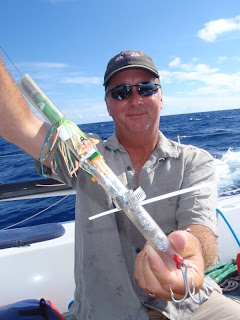 Jim went with this mysto-perverted abomination against man and nature. I was embarrassed just to be on a boat towing this thing.

The results were identical. No fish and two more lost "lures".
Posted by mw at 7:29 AM