In Turtle Bay - preparing to leave. 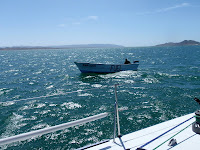 As reported by my much more reliable co-blogger (Deb not Brian), we are in Turtle Bay. Dan and I hitched a ride ashore with the Enrique water taxi service and found an internet cafe in the town. I had hoped to post a few pictures, but they won´t permit me to connect the laptop and the USB ports are disabled on the pc´s. Pics will have to wait until I find a more accommodating intertube. 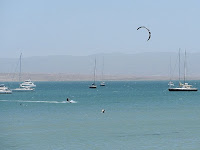 Most of the fleet have left or are in the process of leaving. We will head out noonish. #1 is still on board helping Capitano Pego Lego prepare Morpheus for sailing. Our Capitano engaged in his favorite sport of kite sailing yesterday as we were waiting out the weather. A spectacular day for it on the bay, and we have some great pics and video which will be posted later. Watching Jim was quite a hit with the locals and fellow sailors, and it went very well until it didn´t. Regarding aforementioned knee - it appears to be tweaked but serviceable. With that exception, all are doing very well. No sea sickness episodes. No other traveling afflictions. 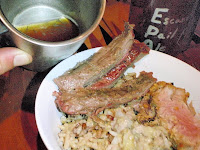 We are eating too well, have way too much food on board and expect everyone will have gained five pounds on the cruise. Tuesday night´s dinner was typical: Fresh bonito sashimi appetizer, bonito tuna ceviche´ as a salad course, choice of marinated beef brisket or seared bonita tuna for a main course, served on a bed of brown and wild rice, with warm Mrs. Fields Cookies for desert. All washed down with Escanaba Pail Ale (Bottle #1) and other more conventional brews. For the nutritionists out there concerned about the vegetable course - no worries - the seared tuna was encrusted in a wasabi, soy sauce, cashew nut rub. 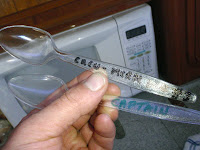 I thought I should also clarify that the utensil crisis on board is not quite as dire as represented in a previous post. There are actually two plastic spoons on board, and after an extensive labor negotiation, the captain has been allocated one spoon and the crew the other. As a consequence, the delivery crew has now organized into a union and will be bargaining collectively for future deliveries. Utensil allocation is sure to be a sticking point. 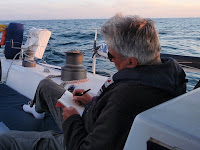 As we get closer to the US, I hope my Sprint Pre will again find a cell tower it likes, as it has not found one since leaving Cabo. I am very bitter as everyone else is connecting regularly. When I again get in range, I´ll get a few pictures up - but they are likely to be jumbled mess as far as the timing when the pictures were taken and will have to be fixed later. #1 and I are also maintaining a pen and paper journal on board, and once back will post portions here with more comprehensive illustrative pics. 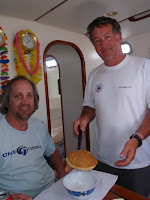 This will have to wrap it up for now. Brunch will be waiting on the Morpheus - We´re expecting fresh eggs, peppers, cheese and salsa in a Mexican omelet with a stack of banana pancakes. Then off to San Diego.

With a little luck, we´ll be just in time to clean up for dinner at the San Diego Yacht Club on Friday. Adios Amigos.
Posted by mw at 9:35 AM

If I have lost #1 status, then I guess the boat crew will have to do without a veteran union organizer. The next thing you know, the boss will be throwing you over board.

Roy,
Clearly MERDE Local #3 would benefit from your newly acquired skills in future deliveries. We will try to sneak you aboard - think "Lenin on a train to Moscow". Should "Card Check" pass, as the local steward I can assure you we will have unanimous support for unionizing the crew - just so long as I don't need to submit to the Un-American practice of a secret ballot.

I like the wide angle shot at the top of this post. How did you do that??

Jim,
It is actually 4 pictures. I got a photo-stitching program with one of our cameras - in fact I think I have three versions of it- as it seems to come with every camera. You've probably got a copy of it also.

You take the pics from one spot, overlap the edges, try to keep the horizon in the same spot, then the program stitches it into a panorama.