On cutting a deal with the fish gods. 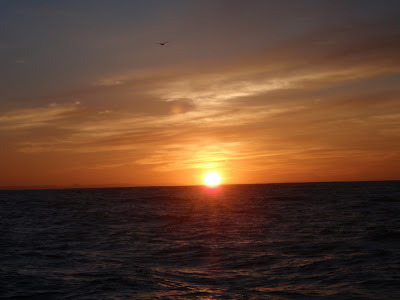 During my 10-12 watch last night, Jim took us on the inside route and closed within 2 miles of Cendros Island. A little too close for comfort during a moonless night.

Adjusting to the new watch schedule, I did not wake on my own for the 4-6AM watch as usual, but was still in time to repay Brian the 12 minutes he claimed I owed him. The watch was made remarkable by the remarkable lack of anything happening at all - calm, straight course, no sea traffic, no course adjustments - nothing but a spectacular sunrise. It was exhausting. I felt compelled to take a nap at the end of the watch.

So began our last full day at sea. 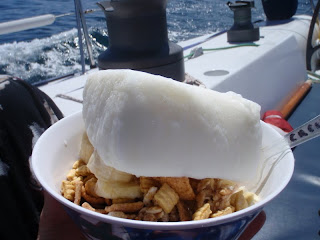 After breakfast (cereal and a block of frozen milk) the hand line went back in the water. Same rig, same painted cedar plug. After a couple of hours, I decided to improve the odds and also deploy the rod and reel. The reel was still rigged with underweight line, just as I left it after the Hawaii passage. Dan and I reloaded it with new 50 lb line, and I started to rig another cedar plug. While I was tying on the leader, before the lure hit the water, Dan called out - "Fish On!" 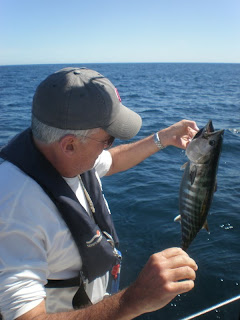 With practice, our second fish should have been easier to land, and it was. The boat was moving faster in calmer seas, so the hooked fish was already exhausted by the time we set up in the back of the boat to pull it in. It didn't have much fight left in it by the time we landed it. Another bonito, somewhat larger than the first. 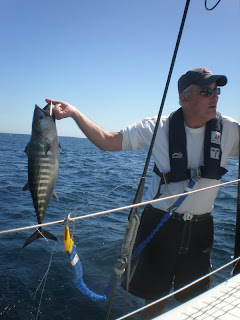 With the previous practice, I was a bit more comfortable filleting the fish on the precarious perch of the transom step... 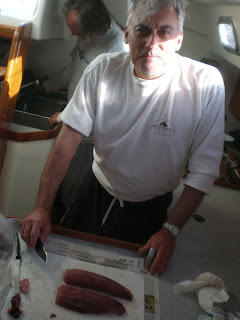 ...and much happier with the results. 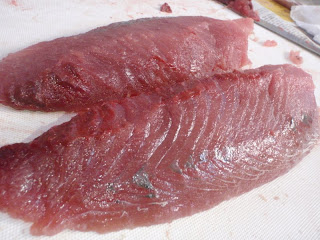 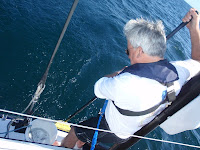 Half the fish went into a ceviche for the next day, another quarter allocated for sashimi, and that left one fat fillet for a future repast. Jim wanted to know when I was going to deploy the rod and reel after investing the time to set it up. I explained I had made a deal with the fish gods - If we catch a fish, I stop fishing until that fish is eaten. Plus I did not want to have to clean up the transom step again.

The rod and reel were stowed below having never been used, but loaded with nice new line. Final score for this delivery - two fish caught on one plug, zero lures and no line lost. 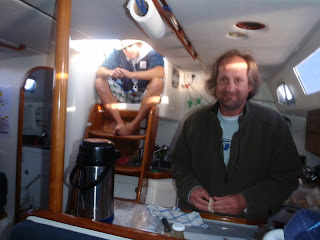 Cocktail hour was delayed until I finished preparing the fish and cleaning up the mess. To supplement the sashimi and the now traditional cheese plate, Dan takes the remaining flour tortillas from Turtle Bay, the leftover beef brisket and whips up some delicious quesadillas. 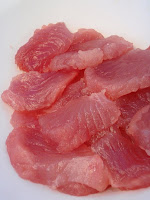 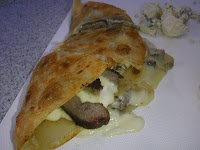 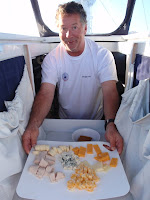 We are eating well.
The day ends as it began, with another dramatic sunset. 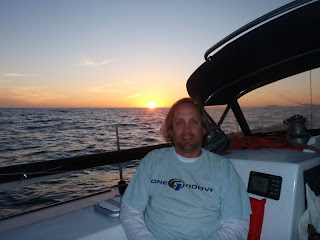 Once again I see the green flash, when no one else on the boat does. Happens every time.
Posted by mw at 9:32 PM

OMG... The frozen milk is too funny. You can, you know, microwave the frozen milk and problem will be solved. Or plan ahead and take the milk out of the refrig/freezer...

Oddly, neither of those possibilities occurred to me.