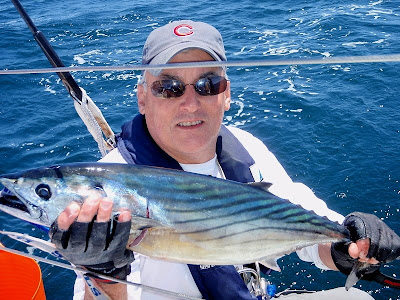 Last night we saw Pendragon's sail on the horizon, and overnight watched her lights shadow us a few miles off the starboard aft. She was gaining on us earlier, but was nowhere to be seen by my morning watch. We were a little concerned as we heard they had some problems during the race with the construction of the new boat. The morning radio call revealed that she had pulled into an anchorage for the night. 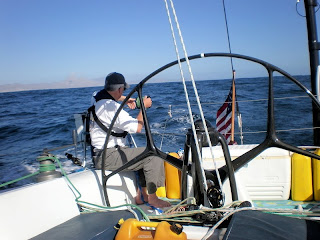 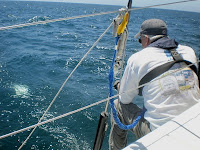 After the watch, I dropped the hand line back in the water. I used the same rig as yesterday, but let out more line - dragging the plug about 45 yards behind the boat. While in the cockpit enjoying my morning coffee, I notice a distinct metallic blue-green flash in the water behind the boat near the lure. I tell Jim and Dan "There is a fish going after the bait right now." I don't think they believed me. In seconds we had a fish on the line. This is the fishing equivalent of Babe Ruth calling his shot in Wrigley Field.

We still have no net on board, but did at least learn one lesson from the last delivery. This time we waited until the fish rolled over before attempting to bring it on board, and then grabbed it under the gill rather than by the leader. 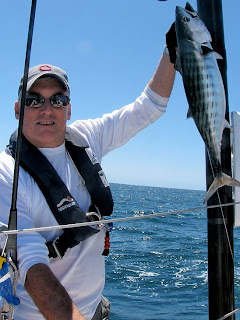 photo by Dan
It was a smallish bonito tuna, but big enough to feed the four of us. Killed it, bled it, and filleted it while hanging off the aft transom step. 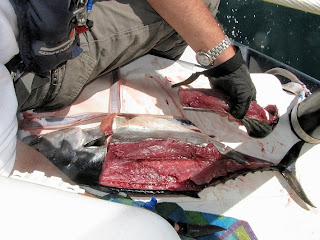 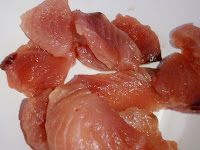 So I got a little fish blood on my cargo pants while balancing on the eight inch step with a knife and a slippery fish. Jim insists I bag the pants and and bans them from the boat for the balance of the delivery. WTF. Anyway - tuna sashimi, tuna ceviche', and and seared tuna is on the menu. Brian tries his first ever sample of sashimi. The verdict? 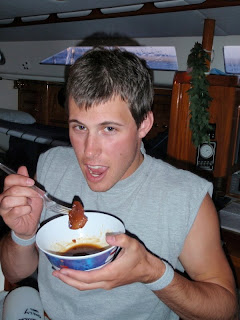 I understand if The Reader thinks I have gone a bit overboard and over-documented this one smallish catch. But after the fishing frustrations of the Hawaii to SF passage, and given that this is my first tuna ever, it just seemed like the right thing to do. After all, with this catch we were 1-0 on this delivery. Scored one fish, in one day, against no lost lures.
Posted by mw at 11:05 PM

Those of us who have in the past been oversold on your fishing abilities appreciate the over-documentation. I am now starting to believe that given enough time you may in fact be able to dupe a fish into falling for whatever you put on as bait.

What was the reason for banning your pants?

I believe Mike let "3 drops of blood" or "sat in a river of fish blood" (it was never decided how much blood made it on the pants), but in either case some got on the pants. Which meant the captain did not want them below deck to smell up his boat.

The real question is where is the picture that document mike without pants?