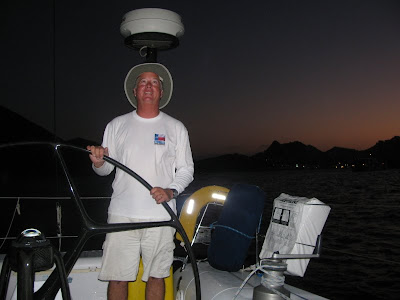 When it became obvious that I would not be on-line during the bulk of the delivery, I started a pen and paper journal. The intent was to transcribe an edited version back into the blog with relevant photos in the days after our return. We'll see if this road to hell is paved any better than my previous trips. The journal begins as we leave Cabo:

We left Cabo for San Diego around 7 PM. The Morpheus delivery crew:
F.O.M. (Friend Of Morpheus) John C was also was also supposed to be on board. He arrived in Cabo yesterday,but after a day of boat prep in the hot Cabo sun and hearing a wind forecast that may keep us holed up in in Turtle Bay, he jumped ship. 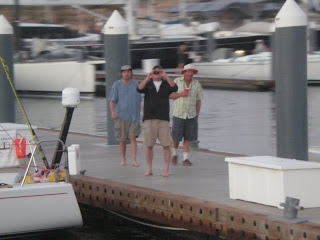 Departure was without incident, except when we cast off lines and Morpheus pulled away with Dan and I still on the dock. 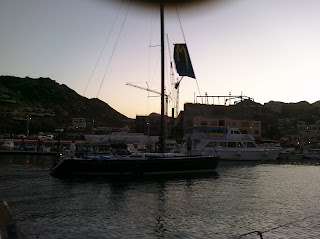 Jim eventually circled back to pick us up, acknowledging his error in pulling away too quickly. 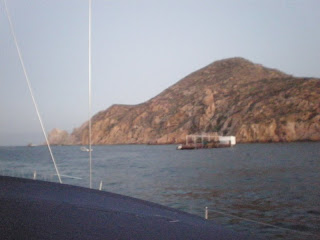 We left at dusk. Arch Rock was little more than a black silhouette against a gray sky as we rounded the point. 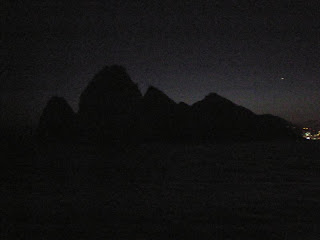 This is Brian's first night as sea in anything smaller that a cruise ship. We're all wondering how he'll do, and have him loaded to the gills on dramamine. The "Baja Bash" is an interesting choice for a first ocean going cruise. The wind picks up and it gets a bit bouncy as we motor up the coast. Brian gets a little queasy, but soon settles down.

We see the Southern Cross off of the port, and the North Star high in the starboard sky. Brian's first watch is 10-12 PM and second watch 6-8 AM. He draws the moonrise on the first and sunrise on the second. We are off to a great start. - mw