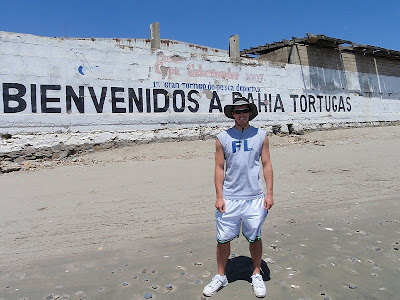 I double bagged the lightweight sleeping bags found on board and bunked in the cockpit, sleeping under the stars. It was a beautiful night but cool and breezy and I am up with the dawn. 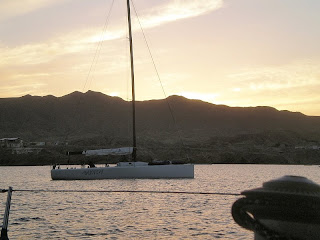 Slow start on the boat this morning as everyone else sleeps in late. No one sleeps in later than Dan. We make book on when Dan would emerge from the aft cabin. The "over" on 11:00 won. 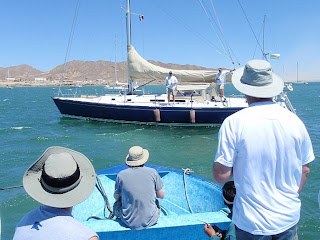 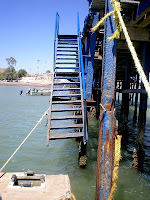 Jim gathered his kite surfing gear and we hail Enrique's water taxi service (same as Enrique's anchorage refueling service) for the boat ride into town. We stop by Prevail to pick up up Captain Bill, who insists on paying Ernesto (Enrique's overworked water taxi driver) with cans of spam. Ernesto circles the boat until negotiations with Bill are complete and we finally head for the pier.

That first step on the landing is a doozy. 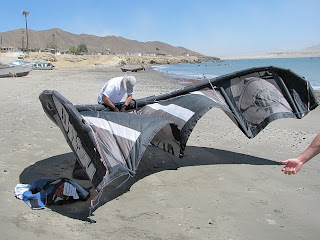 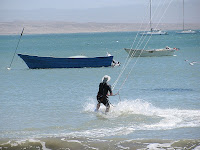 Jim sets up his kite on the beach south (west?) of the the pier. A small group of kids and locals stop and gather to watch the launch. Jim's kite is a black & gray inflatable scalloped wing. I told the kids he was Batman. I don't think they believed me. Big excitement when he launched - the kids were squealing and jumping.

With Jim now happily threading his way through fishing boats, sail boats, anchor lines and masts of the racing fleet, we make our way up the beach. We intend to explore the town, but get no further than a bar/restaurant at the North end of the beach. 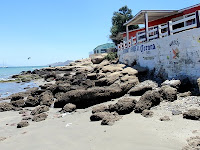 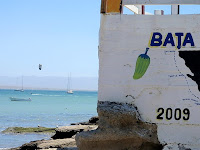 "Enrique's Bar" of course.
I don't know why they do not just rename this place "Enriques's Bay" and "Enrique Town". BTW - that dot floating over the horizon in these pics is Jim's kite. 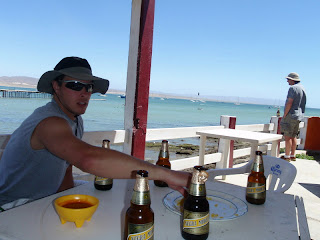 We grab a table on a terrace overlooking the bay so we can keep an eye on Jim. While he plays in the bay, we order a round of cervesa and a plate of lightly breaded and fried camarones, accompanied by fresh, hot, flour tortilla's, frijoles, salsa and chips. We are nervous about the fresh salsa, but dive in anyway. Delicious. No harm, no foul.

A tortilla chip blows off the table and we are overwhelmed by a hitchcockian swarm of sea birds. Distracted and beating a hasty retreat to a more protected table, we failed to notice our captain had gone down and was floating out to sea. After finishing the meal, and another round or two of cervesa, Brian notices that Jim was nowhere to be seen. A quick survey of other patrons in the bar yields the information that he had disappeared heading Northeast. We are very concerned and order another round of cervesa to discuss the situation. Finally we decide the best course of action is to explore the north side of town and go looking for him. 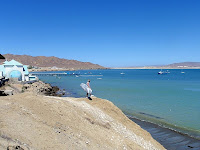 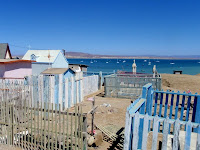 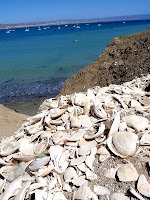 We soon find Jim limping up the dirt road near the cemetery. He tweaked his knee on a bad landing. I am the first to welcome him to the Old Man Club. Brian relieves him of the board and he hobbles down the road to Enrique's for a medicinal dose of alcoholic beverages to ease the pain. We continue our tour of the eastern hills, the cemetery, and the spectacular vistas of the bay and fleet. All this touring makes us thirsty, so we return to Enrique's to see how Jim is recuperating. 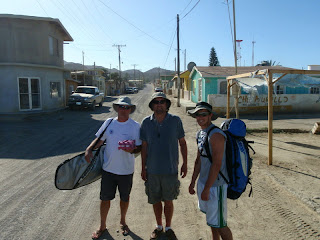 The Three Amigos?
Over the course of the afternoon, most of the fleet crews make it to the bar. Much sail talk, race talk, weather talk, fish talk and beer consumption ensues. Enrique's staff is overwhelmed and cannot keep track of the bills and bottles, much to the dismay of those left explaining they were not responsible for the food consumed by the people who sat at the same table earlier in the afternoon. 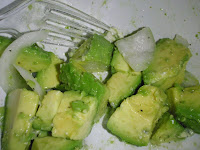 Eventually we pick up some additional supplies and make our way back to the boat. Dan prepares a fine dinner of cheese ravioli in red sauce with Johnsonville sausages. I contribute an avocado,onion, blue cheese salad with oil and vinegar dressing. Since we forgot to bring balsamic vinegar we substituted distilled white vinegar scavenged from Jim's cleaning supplies in the aft deck locker.

Can I get a full sized copy of the three amigos photo in this entry??