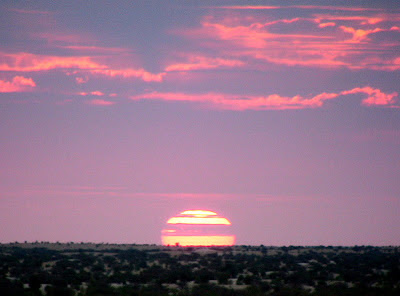 The breaking dawn brings us our first good look at our desert camp. Several of us climb a nearby dune to take it all in.

As camp is broken down, we meet our "military escort" for the Tuareg desert country. A dozen 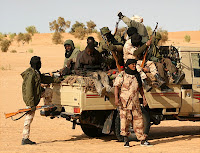 or so turbaned, robed, and camo attired irregular militia ride shoulder to shoulder in the back of a pickup truck, brandishing rifles, AK-47s, and machine guns. For Americans who have been bombarded with images of terrorists on our TV screens for the last six years, they look exactly like - well - Al Qaeda terrorists. Frankly, I really don't understand the the dynamic of this transaction. Are we paying them to protect us from bandits, or are we simply paying bandits for "protection"? Perhaps it does not matter. In any case, they are happy to be photographed, and quickly become a favorite photo subject for the group. 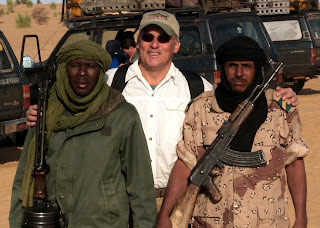 Rolling again. Wes has done some recreational professional race driving, and he talks Sidu into 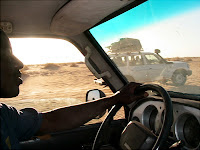 letting him drive his Land Cruiser. The morning drive devolves into the the Niafounke - Araouane Rally. Despite Bouj's best efforts to keep the caravan in a single line, the cruisers are now bombing across the desert, sometimes in parallel tracks, sometimes in line, weaving and passing each other amid the scrub and dunes and ravines. I blame Wes, as he is having "too much fun" driving. 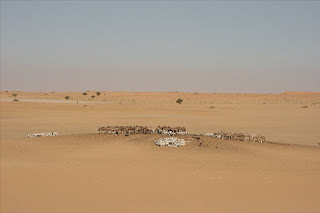 We stop at a major well/watering hole/oasis on the top of a sandy hill. It is a bee-hive of activity, with camel caravans, herd of cattle, flocks of sheep and goats, donkeys, and desert travelers of every attire and hue, waiting watching, drawing water, or (in our case) photographing the proceedings. Sigrid shoots camel portraits, getting some good shots with notoriously temperamental models. 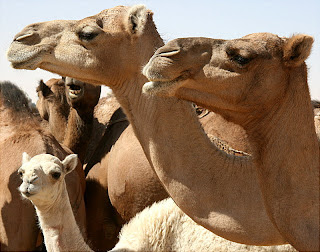 Sidu moves into our car with John, so Susan can ride shotgun with Wes. The desert begins to take it's toll on the vehicles as we press on. Flat tires and stuck vehicles provide opportunities for frequent breaks. "See you at the next breakdown." Mark says cheerfully as we climb back into the car. After one such break, Susan and I swap vehicles, so I can shoot video of Wes driving from inside his car.

Note to Reader: Video of Wes driving in the Araouane "rally" will be updated here at some unspecified future date - after I get the sand cleaned out of the camera and repaired or replaced.
UPDATE - 11/11/08: I finally got around to it. The video is linked here.

Just after the camera battery runs out of juice, during another 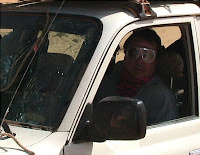 bone-jarring bump, the supplies secured to the roof suddenly shift, a spare tire tethered to the roof rack breaks loose, swings like a pendulum, and smashes directly into the driver windshield. Wes never takes his hands off the wheel, and disaster is averted as the safety glass cracks but holds. Beyond the jarred nerves, there is no injury to Wes or myself. The windshield itself did not fare so well, and is now a spider web of cracked glass.

Over lunch, Wes decides that he has had enough, 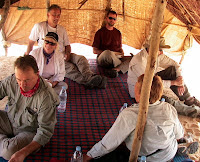 and leaves the driving responsibilities to Sidu. I return to the Zebra Cruiser with Sigrid. Breakdowns and delays continue in the afternoon, but we manage to get to our second desert camp by sundown. We are in the shadow of a large dune, and we finish setting up camp in the dark. The temperature is dropping and the wind picks up. For the first time on the trip, I am cold at dinner. Sigrid is exhausted and dines on power bars in the tent. 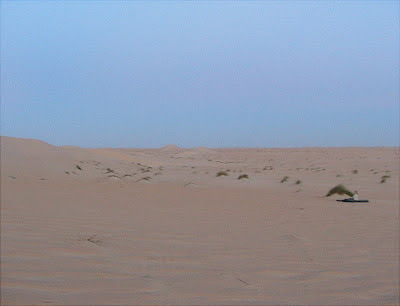 Sigrid stakes out our second desert campsite.
The toilet was set up behind a bush only about 70 meters from our tent. In the night, before the moon has risen, I decide to make my way to the toilet. I am using a small maglite flashlight, but in the moonless night, it

is only useful to illuminate the ground directly in front of me and to destroy my night vision. In the dark I give up looking for the "official" toilet, and use a handy bush. As I start back to the tent, I become disoriented and am not sure of the correct direction back. The shots of whiskey after dinner to fortify myself against the cold may have been a contributing factor. Not wishing to compound my error by striking off in the wrong direction, I stop and take stock. I am lost in the middle of the Sahara desert. I turn off the flashlight, determined to stand there in one spot until my eyes adjust to the dark. After several minutes, I can see the outline of the large dune, but before I start to move, I suddenly realize that I am not alone. A few feet from me, one of the Tuareg militia is standing and looking at me. Dark robe, dark turban covering most of his face, rifle slung over his shoulder, he points in the direction of my tent. I say "Merci", and proceed directly to the tent and crawl into the sleeping bag. Feeling much better about our Tuareg escorts, I am soon asleep, secure in the knowledge that I have survived the ordeal of being completely lost in the Sahara desert for 30 long seconds.
Posted by mw at 10:06 PM