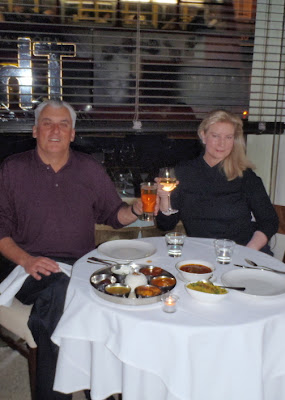 They say the best Indian food in the world is to be found in London and not India. This is our first opportunity since our India tour of 2009 to test that proposition.  As noted in the last post, my now wifi-limited droid found several Indian restaurants in easy walking distance of the hotel.  We decided to forgo the adjoining Bombay Brasserie, which Zagat identified as "overpriced" to stroll a few blocks to a concentration of three Indian restaurants on Old Brompton Road: Star of India, Noor Jahan, and Thali. Of the four, three have been around for decades and have been extensively reviewed on Zagat and elsewhere. Thali Retaurant is relatively new and sparsely reviewed. So that's where we went:


Net net. We dined early and were the only ones in the restaurant for most of the dinner. Service was excellent, proprietor was pleasant, food was great.  I wouldn't say it exceeded anything we had in India - we had some pretty great meals in India - but everything was excellent. Thali  definitely earned the MW RECOMMENDED stamp of approval.


I suspect that when you start taking pictures of your food in a lightly trafficked restaurant on a competitive corner, you get more attention than you might otherwise. In particular, we loved the Palak Chat, which we did not order....
... as they it served to us gratis. It's a signature house appetizer that our server claimed to be unique to Thali. Spinach and other fresh greens are marinated for a day and lightly crisped. I can't really describe it adequately, but it was fantastic and not to be missed.
Note: Writing this from memory, so not sure I got the spelling on all of these dishes correct.

That meal looks delicious. I think Northern Indian food is some of the best around. The restaurant tables and chairs look perfect for two as well. One of my biggest pet-peeves is when I have to sit in an uncomfortable chair or table at a restaurant. It looks like you had a great time!

Excellent report so far, although a photo of Sandy from the plane would have been a nice touch.

Hii.. Thanks for you posting this blog.