Bishingari, Birds, Fish and Other Critters 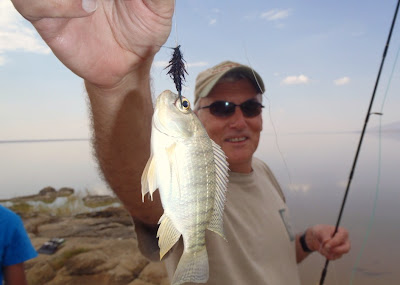 Full day, relax along the beach and walk in the well-preserved ecosystem.

Journal: While planning the itinerary Sigrid expected we might need a little down time as we transitioned from the tour of northern Ethiopia to an expected  more strenuous tour in the south.  She was more right than she knew.  We grew complacent with our eating habits in the north, and in our first foray south we both had a bad reaction to the our dinner in Bishingari.  I suspect the salad exposed us to something that the locals have adapted to and we have not.  I don't blame the Bishingari resort. It's the reason that when traveling in Africa, we normally stay away from fresh vegetables and fruits that are not peeled. I had a rough night but was feeling better by morning. 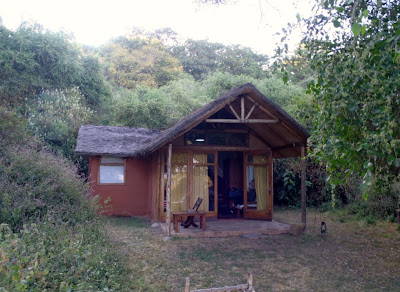 We had a birding and nature walk scheduled, but Sigrid decided to stay in the bungalow and recover. I took her camera and set out with Yohanes and a local guide. She was not alone. While I was gone, a troop of baboons took up residence in the trees and grounds around the bungalow. 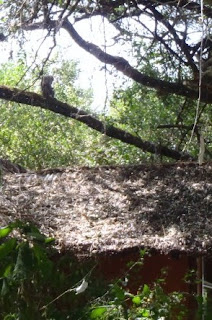 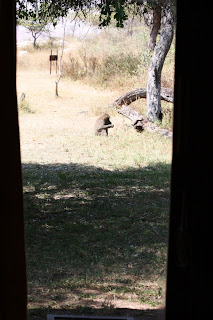 Baboons above the bungalow and through the door

This is the place to see birds and the resort attracts some serious birding enthusiasts. I enjoy birding, but am strictly a dilettante and do not maintain a life list.   Even though I was carrying Sigrid's camera with a long lens, I was feeling somewhat inadequate compared to the lenses I saw at breakfast. Still - got some good shots.  I don't really remember the names of the birds our guide identified, but will fill in and update captions as best as I can recall. 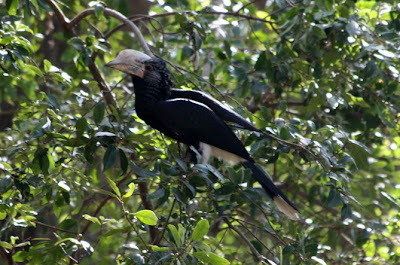 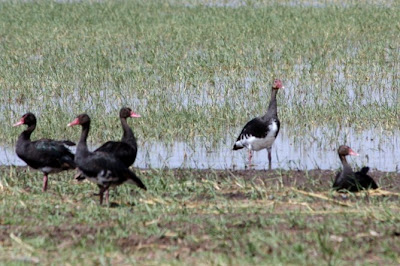 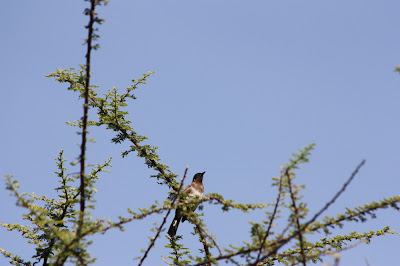 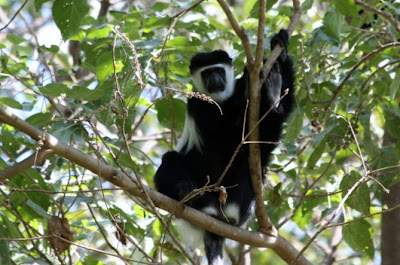 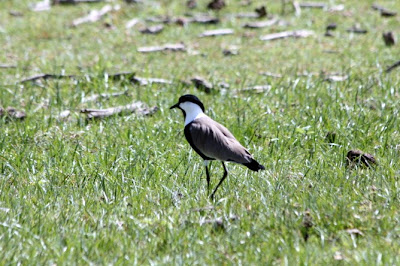 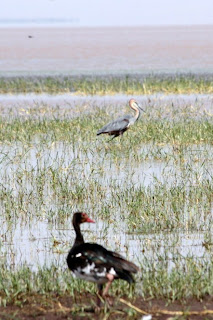 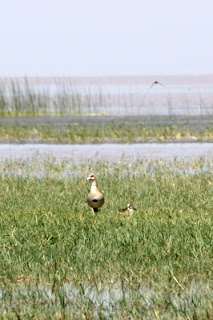 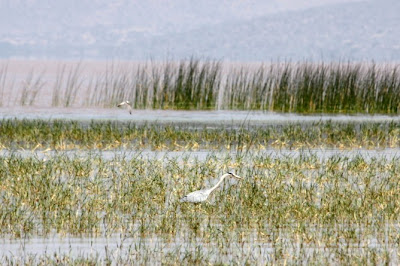 Some large spider webs were noticeable while walking along the trails and near the bungalow. I was wondering what kind of spider made the web, and upon closer inspection (but not too close) I realized these were cooperative community webs that harbored dozens, if not hundreds of spiders. And the spiders themselves? The stuff of which nightmares are made: 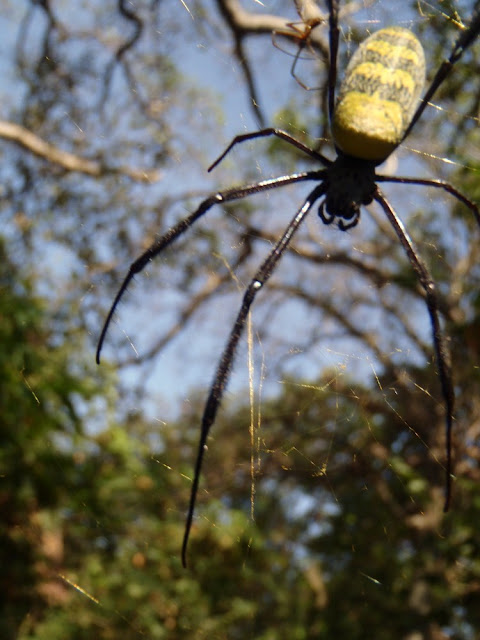 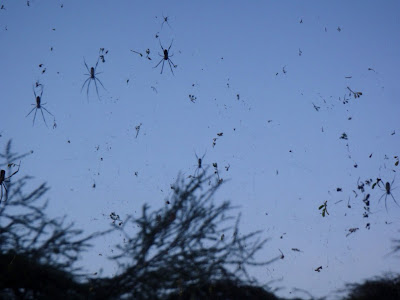 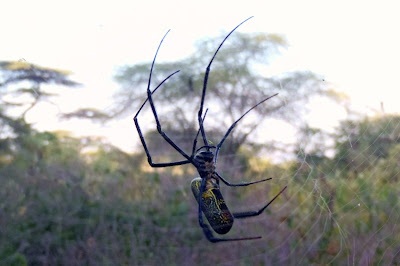 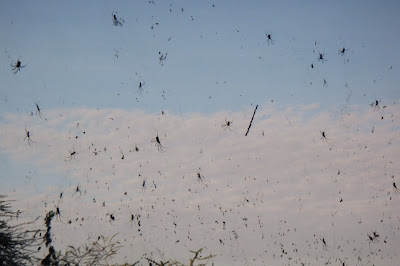 On the way back from the hike, we ran into these kids: 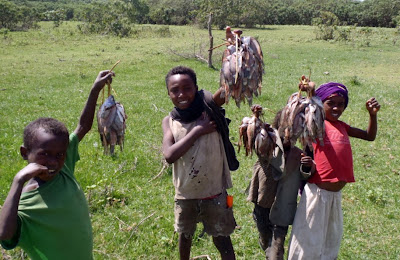 At first I thought they caught the fish themselves, then realized all the fish were already fileted.  They must hang around the fishermen when they come in with their catch. After the fish are fileted for market, the kids take the rest home for soups and stews.  No matter. There be fish here.  Yohanes and I resolved to try our luck in the lake after lunch.

Before departing on this trip, I purchased a cheap portable spin/fly rod and reel combination from Amazon. My brother Harlan dismissed the purchase saying that by trying to be both, it would not work well as either. He is right, of course, but the setup met my objectives of being cheap and portable, and I did not care if I broke it or brought it back.  I already proved Harlan right with my first foray at Lake Tana, where after a few casts with the spin rod I so hopelessly tangled the line that I had to cut and dispose of 2/3 off the reel. 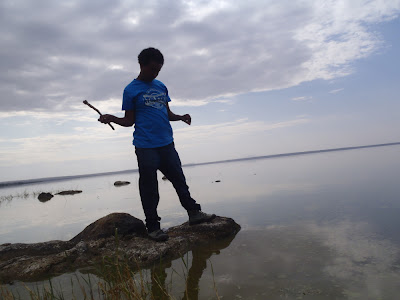 Yohanes and Alxe had checked with some locals and were convinced that I was doing it all wrong anyway. They informed me that the correct technique to was to put a big chunk of meat on a hook and throw the hook and bait into the water. That sounded like a formula to catch big catfish or other bottom feeders and didn't sound too interesting to me. So I sacrificed the rest of the spinner line and set them up with a hand line and a hook they could bait and throw.  I went with the fly rod configuration and started tossing some of Dad's  "6 for a $1" Wallmart poppers around. 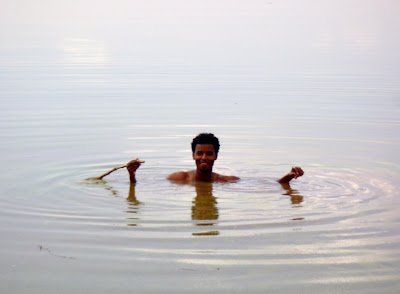 Net.. net... Yohanes and Alxe kept snagging the hand line on the bottom. I explained that I did not have any more line, which  prompted Alxe to go in after the snagged line against my better judgement. 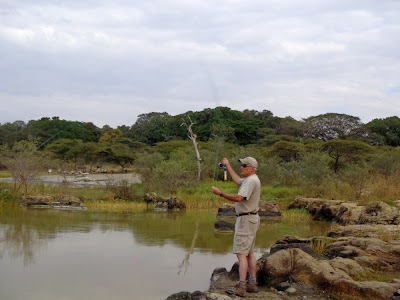 I had fun throwing the flies around, but all I had to show for it was the trophy at the top of the post. 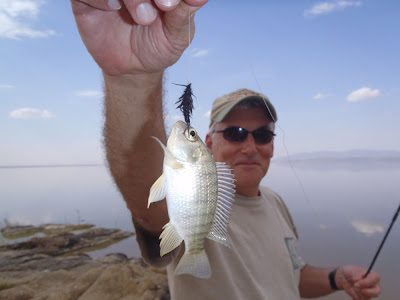 At least I was able to instruct Alxe how to properly photograph a fisherman and his catch. 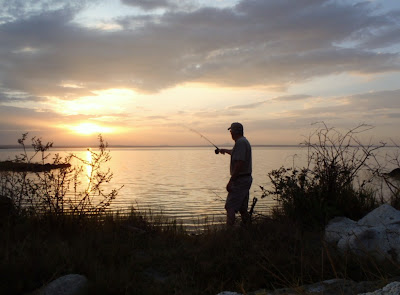 Editors Note: I intend to pre-load and schedule automated blog posts with the daily itinerary for our Ethiopian adventure. For those interested, this may be an easy way to follow along. Since we will not have internet access for most of the trip, my hope is this will make it easier to add some pics and journal commentary if and when we run across an internet connection. If there are no pics or commentary, you'll just have to wait until we get back. We'll see how it goes.

I'm not sure this qualifies as a fish. Although... I think I've cooked and eaten bluegills this size.