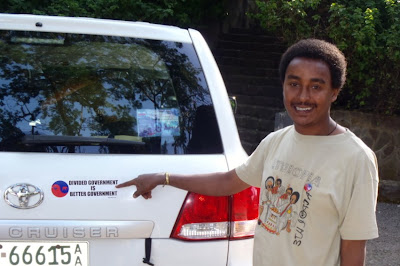 In the morning, we will make boat cruise over Lake Tana to visit the ancient 14th century island monasteries of Lake Tana. The 37 islands of Lake Tana shelter twenty monasteries-surviving remnants of an old, contemplative tradition. Because of their isolation, they were used to store treasures and religious relics from all parts of the country. The Lake’s monasteries are famous for their typical Ethiopian religious paintings, illuminated manuscripts, and other ancient church treasures. The monasteries that we are going to visit include Kibran Gebriel, Ura Kidane Mihret and Azua Mariam.

Journal:
I am awakened at 4:00 by the call to prayer from nearby Bahir Dar. Ethiopia is predominantly a Christian country, the only one in Africa, but home to a significant Muslim population, and surrounded by Muslim nations on all sides. More on the topic in a future post.

Today is election day. Before leaving Addis Ababa I managed to get my last thoughts on the election posted to The Dividist Papers. I felt compelled to justify my reason for casting a grudging vote to reelect Barack Obama despite the fact he truly sucked as president in his first term. Yohanis was curious about our vote, as were some Australian bikers we met near the bridge over the Blue Nile. When asked, I cannot help but offer up a “divided government” elevator pitch to explain my vote. Yohanis and Alex seems simply pleased to know I voted for Obama. Understandable since Obama was born in neighboring Kenya [SPECIAL NOTE TO HUMORLESS LIBERALS: It's a joke.] 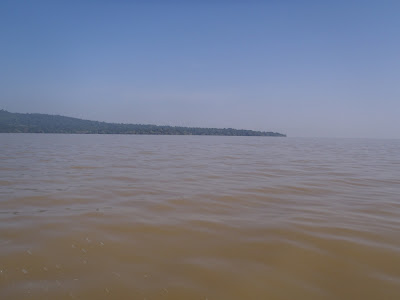 Lake Tani is the largest lake in Ethiopia. 16 rivers flow in, and only the Blue Nile flows out [aka Abaye River]. The source of the name is a mystery, as both the river and the lake are the color of coffee with cream. All those rivers carrying all that silt from the highlands consistently keeps the lake this color year round. I've seen brown silty rivers before, of course, but never a body of a water this size. 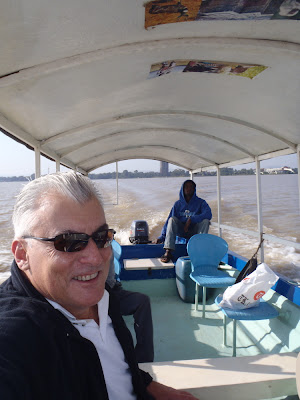 Yohannis arranges for a water taxi to take us on a morning tour to three island monasteries. Motoring across that expanse of brown water sparkling with blue highlights has an unreal, surrealistic quality – like the colors in a Magritte painting. The silt apparently does not affect the health of the fish population as the lake supports commercial net fishing by locals. Nile perch and tialappi are the desired species.

The morning tour of three monasteries on three islands span a range of utility for monastic communities founded in 14th century. 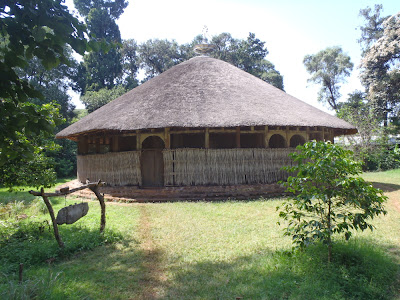 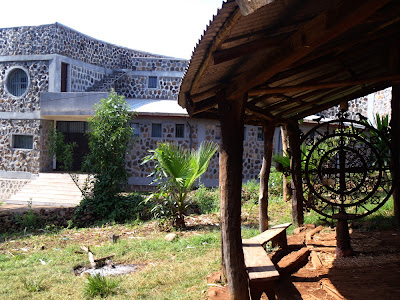 The monasteries themselves are of similar construction, circular, with an inner ring covered with religious illustrations used by the priests to educate in religious dogma. Inside the inner ring is an ark of the covenant accessible only to the priests. The first visited monastery had the original thatched roof replaced by metal construction and the paintings were extensively restored. 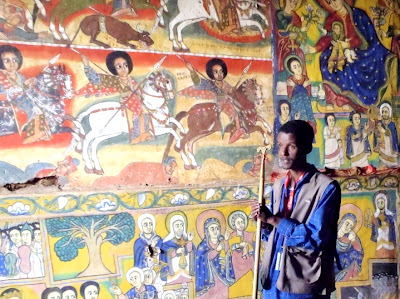 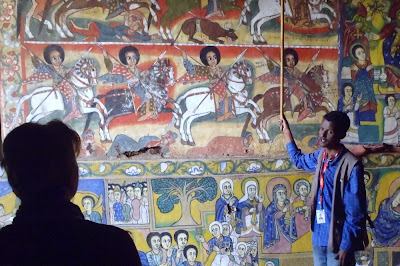 The last was original construction, but inaccessible to all but the resident monks. 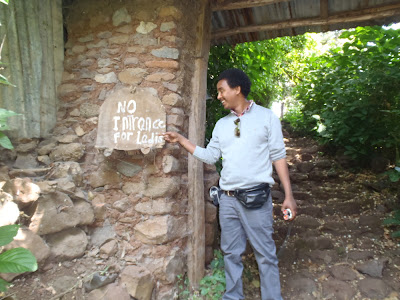 Women were forbidden at the last site, so Sigrid waited near the boat while Yohanes and I hiked up the rocky path to the monastery. An adjunct “treasury house/museum housed crowns, garments, crosses and ancient books at each of the visited sites. The most extensive library we could see was at the last. 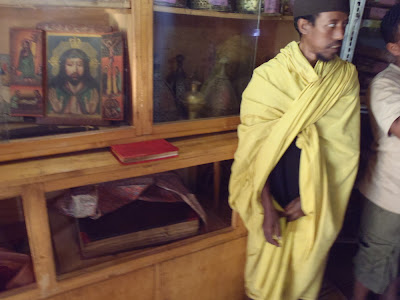 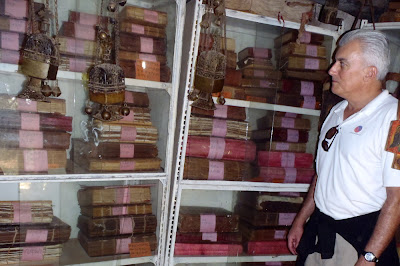 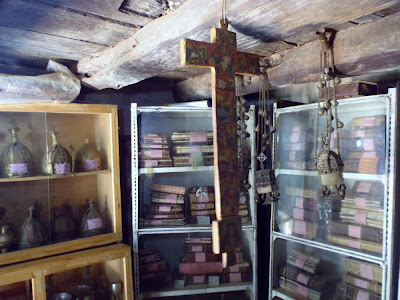 These books are of particular interest to us, as we are still hoping to learn more about the book we purchased in Burkina Faso during our 2007 West Africa tour. We've already learned quite a bit. Our book is Ethiopian in origin, and uses the Ge'hez scrip – the similarity of the scrip in the ancient books to the one we purchased is unmistakable. 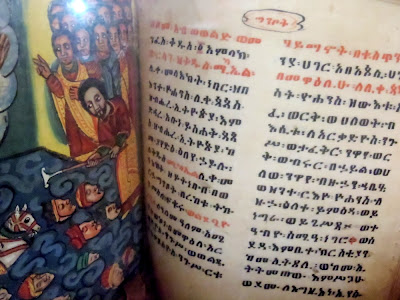 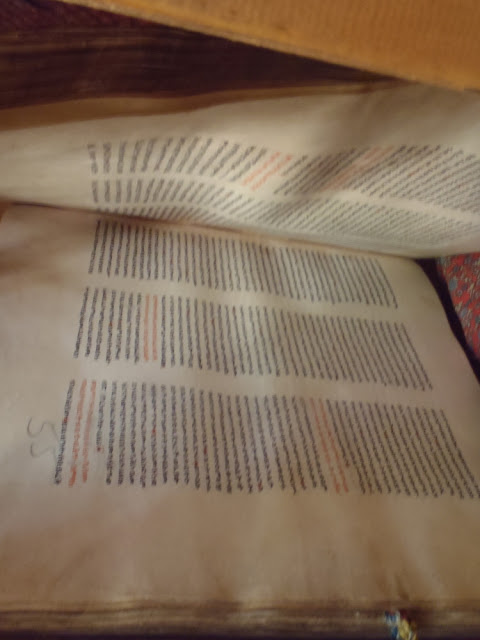 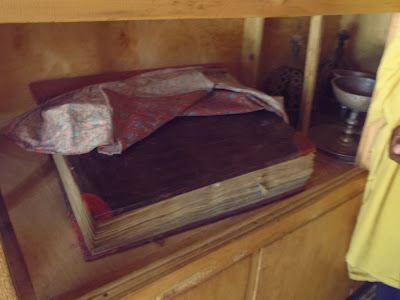 As it turns out, Yohanes is studying to learn the Ge'hez scrip as part of his Eastern Orthodox religious studies. Learning the scrip entails learning the language, the meaning and the melodies with which the words are recited. Think – Latin chants in a Catholic Mass, or a Cantor singing Hebraic prayers. We showed him the scanned pages on the Kindle, and he immediately recognized it as Ge'hez, with the words referencing Jesus and his teachings. We hope to get a somewhat more substantive translation later in the trip.


Editiors Note: I intend to pre-load and schedule automated blog posts with the daily itinerary for our Ethiopian adventure. For those interested, this may be an easy way to follow along. Since we will not have internet access for most of the trip, my hope is this will make it easier to add some pics and journal commentary if and when we run across an internet connection. If there are no pics or commentary, you'll just have to wait until we get back. We'll see how it goes.