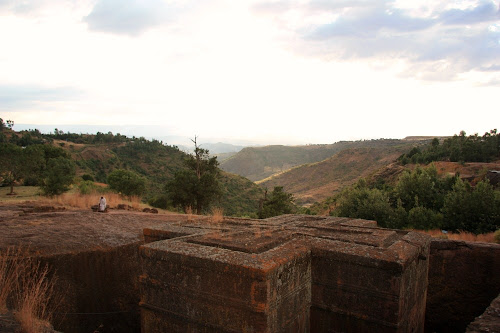 After having an early breakfast at the hotel, transfer to Axum Airport for your flight to Lalibela. After check in to Mountain View Hotel, we will drive to the site where we find a concentration of some of Ethiopia’s most famous rock-hewn churches, mostly referred by many as “the living wonders of the world” These churches are, and they have been for at least 800 years, an active Christian shrine, the spiritual center of the country’s religious life. The monolithic churches were carved out of 2,600-sq meter natural rock terrace in the 12-century AD by king Lalibela.

Bete Medhani Alem, the largest monolithic rock-hewn church in the world, measures 37.7 ft in height, covers an area of almost 2625 square ft and has walls that are up to six feet thick. A plain building supported by 36 pillars on the inside and another 36 pillars around the outside, Bete Medhani Alem was modeled on the original St. Mary Zion Church built by King Ezana in the 4th century at Axum . The rock-hewn churches that we will visit today include: Bete Medhani Alem, Bete Mariam, Bete Meskel, Bete Denagil, Bete Golgotha Michael and Bete Giorgis.

In the evening, there will be Ethiopian traditional coffee ceremony for the group prepared at a local house. Those who can’t face their day without a cup of coffee may be surprised to know that in it’s birthplace in Ethiopia’s Kaffa region-from which it gets its name- the berries were originally only eaten, never roasted and ground for a drink. Only since the 13th century, coffee has been made a hot drink. Holding a coffee ceremony is a traditional Ethiopian way of welcoming a guest and giving the guest the best hospitality. It is probably one of the most celebrated Ethiopian traditions, and a lifestyle - in which most Ethiopians can identify themselves with.

Journal:  From Axum we fly North to Lalibela. Alxe will take the Land Cruiser to Addis Ababa where he will meet us two days hence. The Ethiopian Air Bombardier Q400 gets us there. 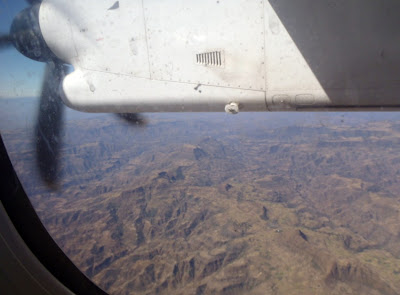 Two days and two nights in Lalibela. the hometown of or our guide Yohanes. He has a lot of connections and family here, which afforded us unique opportunities to explore the local culture off of the usual tourist beat. We will diverge from the usual chronological flow of the blog for this visit to better reflect that fact.  We'll  focus on the peek into Ethiopian culture afforded us by the Yohanes connection in the next post. 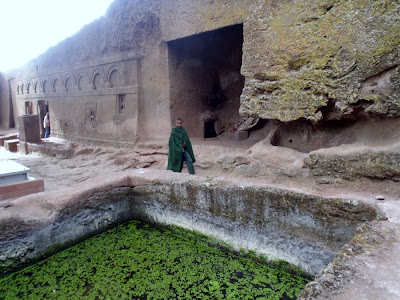 In this post a selection of pictures and notes on the primary tourist attraction in Lalibela – the rock-hewn churches. 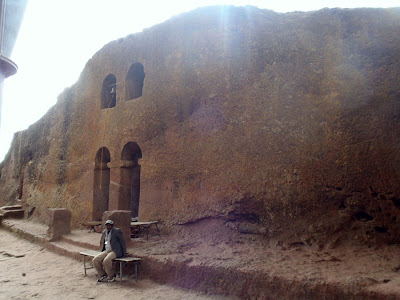 We visited 10 churches over the two days – all carved out of a solid rock cliff faces during the reign of King Lalibela, who was eventually canonized as a saint. Some free standing from the rock, some embedded in the rock, some in a partial state of collapse, some as solid as the day they were carved, each more amazing and confounding than the last. 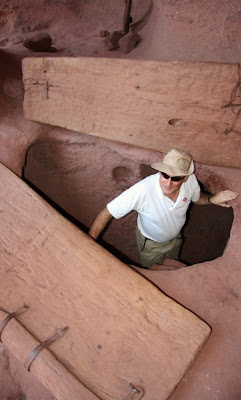 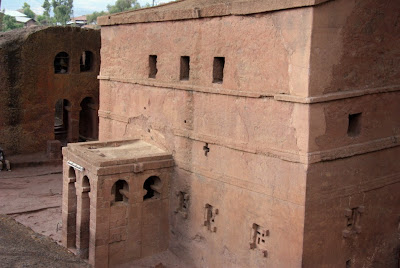 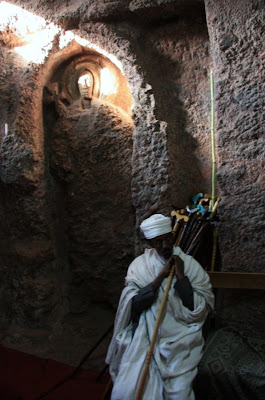 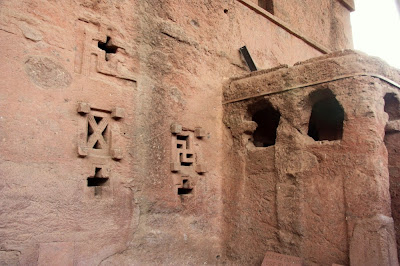 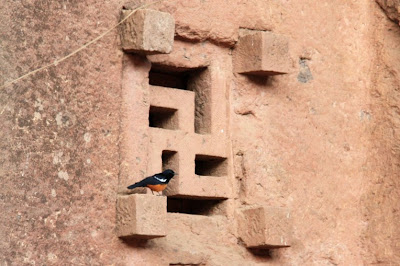 The symbol had a different meaning in the 14th Century

We stay at the Mountain View Lodge, which afforded a room with a view unlike any we have ever experienced before. 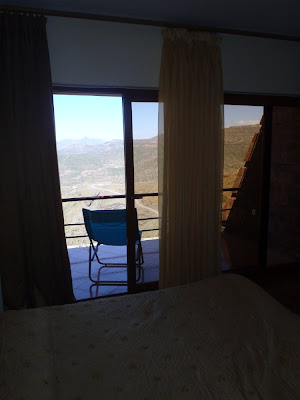 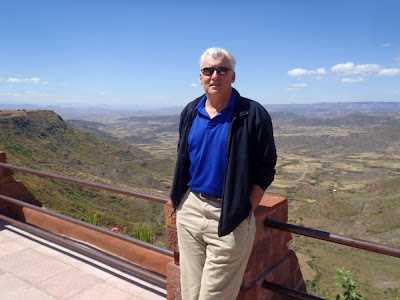 Editiors Note: I intend to pre-load and schedule automated blog posts with the daily itinerary for our Ethiopian adventure. For those interested, this may be an easy way to follow along. Since we will not have internet access for most of the trip, my hope is this will make it easier to add some pics and journal commentary if and when we run across an internet connection. If there are no pics or commentary, you'll just have to wait until we get back. We'll see how it goes.
Posted by mw at 7:00 AM