Today, you will have a full day city tour of Addis Ababa which include: Merkato, the largest open air market, St. George Cathedral, Ba’ta Mariam and Pissa and Churchil Avenue for last minute shopping. In the evening, there will be Grand Holidays’ complimentary farewell dinner party with traditional special buffet and local drinks. There will also be cultural dance show of the different ethnic groups living in the country. There will not be any better way of ending a trip. At the end of the Farewell dinner, transfer to Addis Ababa airport for the flight back. End of tour!

Journal:
The itinerary for the day was irrelevant, as we've already done most of it.  We took the city tour on our first full day in Addis three weeks ago. We enjoyed the farewell dinner celebration last night. That just left last minute shopping. Sigrid did have a shopping list.

I should mention that I again reacted badly to the Ethiopian food at our farewell dinner last night. I don't believe there was any problem with the food (no one else had an issue).  It was purely psychosomatic. This was the first time I ate injera since getting poisoned at the Buska Lodge.  My system was just not taking any more chances with Ethiopian food, no matter how much I like it. Net net -  Sigrid went shopping with Alxe and Yohanes. I stayed in the room, watched Al-Jazeera to catch up on the world,  reorganized the bags for the flight, and worked on the blog.

Des, Yohanes, and Alxe joined us for a final toast in the Jupiter Hotel bar before heading to the airport. We've been living with these guys for the last three weeks and are going to miss them. This is probably a good time to give our hearty recommendation to Grand Holidays Ethiopia. Des worked extensively with Sigrid over a lot of months to put this itinerary together. We had complete confidence in Alxe as our driver. He kept us safe and comfortable over a lot of days, on a lot of terrible roads, navigating difficult traffic condition. And Yohanes is just a great guide that afforded us a unique opportunity to experience the culture of the country he loves. They are a terrific team.

Regarding the flights -  This was a five airport, 36+ hour routing:

The Khartoum stop was a bit of a surprise. Apparently Lufthansa has major fuel infrastructure in Khartoum. Every flight out of Addis stops there for refueling. A five airport day is never a good day. A 36 hour, 5 airport day is definitely a bad day. At least we were in business class, and that almost made it tolerable. Almost. 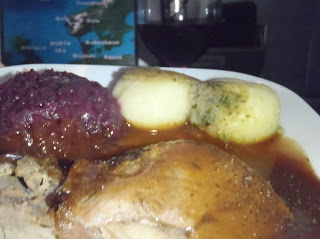 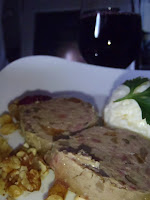 We had two security / custom episodes of note.  Entering the Addis Ababa airport, all baggage is run through a security screen.  Right off the bat, my obsidian rock caught the attention of the security personnel.  At first the screener said it was not permitted to take the rock out of the country.  We spent some time explaining that this was just a rock we picked up off the side of the road as a souvenir. Finally they relented, putting the rock back in our bag. We thought that was the end of it. It wasn't.

A couple hours later, as we were boarding the flight, we were intercepted by Lufthansa personnel saying that security wanted to talk to us. What followed was a tour through the bowels of the airport to another security baggage screening machine where again they wanted to look at my rock and again said it was not permitted to remove it from the country.  I did not want to miss the flight, so was constrained in my ability to put up a spirited defense.  In the end, I am disappointed to report that they kept my rock.  I do not understand what makes Ethiopian security so possessive about rocks that litter the sides of their roads.  In retrospect, I suspect the rule is really not about rocks, but about removing ancient hominid artifacts and tools. Since obsidian was used extensively as tools by our ancestors, Ethiopian airport security apparently assumes that all obsidian is an artifact. It's not. My rock was just a rock. I am very bitter about the loss of my rock. 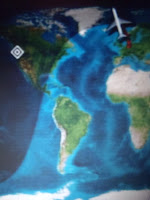 From Frankfurt we chased the sun all the way home. We took off after dark, and the sun spent most of the time just above or below the horizon for most of the flight, only really getting dark as we flew over the arctic circle.


We went through U.S. customs in Seattle. Why did we fly into Seattle instead of directly to SF? Because United is punitive when you use points for a big trip.  That is the only reason I can think of.  I checked off the box on the customs form admitting we did indeed spend some time on a farm or pasture. Cattle were everywhere in Ethiopia. The whole country is a pasture. Checking that box caused us to be diverted through agricultural screening in customs.  They dug out our hiking boots and cleaned them for us.  We were actually kind of  appreciative. I did not want to clean them.

Finally got home after dark. It was a great trip, but there's no place like home.

Editors Note: I intend to pre-load and schedule automated blog posts with the daily itinerary for our Ethiopian adventure. For those interested, this may be an easy way to follow along. Since we will not have internet access for most of the trip, my hope is this will make it easier to add some pics and journal commentary if and when we run across an internet connection. If there are no pics or commentary, you'll just have to wait until we get back. We'll see how it goes. UPDATED
Posted by mw at 11:00 PM

What's asking so long with the picture and story backfill on the blog ?

Thanks. Glad to be back. Yesterday was mostly a recovery day from the five airport / 38 hour transit.

Still, I've managed to get four posts out in the last two days. These things take time. We did a lot of stuff.

As I write this the blog is current through the 15th.

Oh, my gosh! I just relived my trip to Ethiopia (the southern part of it) through your blog! I'm sorry to hear that you had a couple cases of "Selassie's %^&"
(the equivalent of Montezuma's Revenge). I stuck with spaghetti & tomato sauce the whole time and came out unscathed. The photos are beautiful! Thanks to Sigrid for sending me the link. You did a fantastic job on your blog!
Happy travels in the future,
Carol

Hi Carol,
Thanks for the kind words. It is great to see you commenting on the blog for this trip. As you know, the reason that part of the trip looked familiar is that you helped us put it together (by "us" I mean "Sigrid" of course). Not everyone would offer so much help to strangers contacting them on a "cold call" through trip adviser. You are a big part of the reason we had a great experience in Ethiopia. Thank You.