Axum and Yeha and the Ark of the Covenant 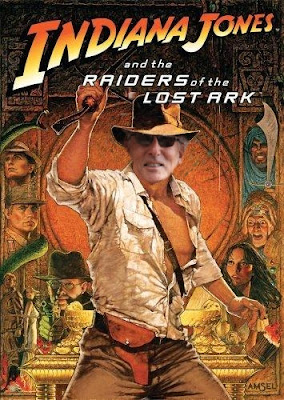 After breakfast, we will start to visit the ancient city of Axum. This is the birthplace of Ethiopian civilization, and by the first century Axum was a major trading center for exotic goods from Egypt, Rome, Nubia, Greece, Syria, and India. The Holy Ark of the Covenant was brought here before the destruction of the Temple, and Axum is reputed to be the second Jerusalem. Our visit in Axum include: the Stele Square, Kaleba Tombs, the 4th century Christian inscription of King Ezana, Queen of Sheba’s Palace, Archeological Museum, and Tsion Mariam Church where the original Ark of the Covenant is housed. In the afternoon, an excursion to the pre-Christian temple of Yeha and the most ancient monastery of Debre Damo (men only), by climbing the cliff with the help of the monks using a rope.


Journal:
The city of Axum is the place to gain an appreciation of the ancient pre-christian history of Ethiopia, and to delve into the legend of the Ark of the Covenant. When I say “legend”  I am speaking from a Western perspective. From your average Ethiopian perspective the transport of the Ark out of Israel centuries before the destruction of the Temple, it's movements within Ethiopia, and it's current location in Axum at the Maryan Tsion chapel, is referred to as “history”.

The Stelae field is arguably the principle tourist attraction in Axum. Three dominant obelisks, each carved out of a single block of granite, transported from a quarry and erected on this site by means that is lost to history. 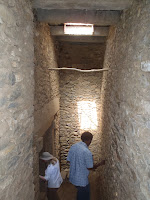 Exploring the royal tombs under the Stelae 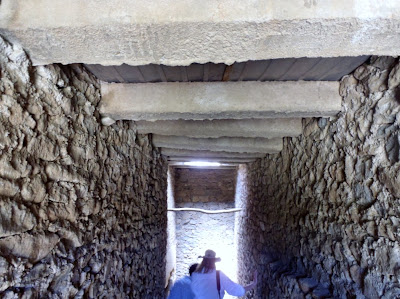 Clearly influenced by the obelisks of ancient Egypt, their stories span the range of Ethiopian civilization. Paying homage to the moon god, they were built during a time of competing Jewish, Christian, and pagan societies in Ethiopia. The shortest of the three stands erect at 23 meters high, as it has for the last 1400 years or so. The second tallest has recently (2005) been returned and re-erected on this site, after being carved up and carted off to Rome as war booty during the Italian occupation of 1936 – 41. The largest would have stood 33 meters if indeed it ever stood at all. Scholarship and local guides agree that the largest steli fell and broke apart on it's erection - lo those many centuries ago. One cannot help but think that was very bad day for certain Axumite stonework engineers and architects. 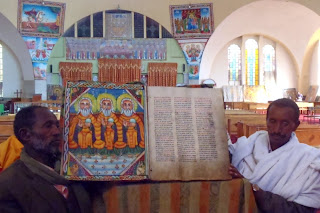 Dealing with the legend and history of the Ark of the Covenant is far beyond the scope of this little blog. For any interested, in his book “The Sign and The Seal” Graham Hancock concocts a plausible circumstantial scenario making the case for the Ark being in Axum. Stuart Munro-Hay in his book “The Quest for The Ark of the Covenant” debunks Hancock's scheme. I've read neither, but if I did I am sure I would find them both enlightening, informative and thought provoking. All we really know is that the Ark was in Solomon's Temple when he built it in the 10th century B.C. And we know it was not there when the Babylonians destroyed it in 587 B.C. And we know there was a migration of Judaic rituals to Ethiopia that pre-date the Josiah reforms of 640 B.C. And we know that no one today knows where the Ark is or what happened to it.

Except Steven Spielberg and every single Ethiopian. 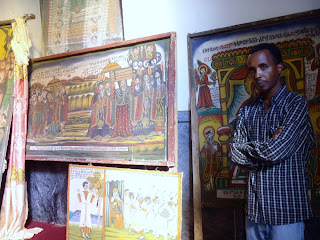 This was the first day of the trip where the implementation diverged from the itinerary. The mule ride and rope climb to the “men-only” monastery never happened. Yohanes explained we did not have time to do both an adequate Axum tour and drive outside of town for the rope climb. After 9 days together, we trust Yohanes more than we do the itinerary.

Of course we cannot move on to the next post without a coffee ceremony.... 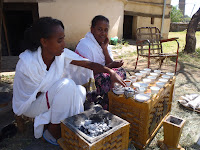 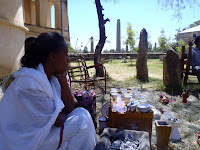 
Editors Note: I intend to pre-load and schedule automated blog posts with the daily itinerary for our Ethiopian adventure. For those interested, this may be an easy way to follow along. Since we will not have internet access for most of the trip, my hope is this will make it easier to add some pics and journal commentary if and when we run across an internet connection. If there are no pics or commentary, you'll just have to wait until we get back. We'll see how it goes.UPDATED
Posted by mw at 7:00 AM

Rope climbing with a Monk boost? I am imagining Sigrid is a bit relieved this piece of the day was for men only.

Thanks for the history (or legend). What a fasinating and once in a life time trip! Stay safe. Nanci

Thank you for posting this interesting blog. I did not know about this history (or legend )of the Arc of the Covenant. Enjoy the rest of your trip and stay safe! nanci