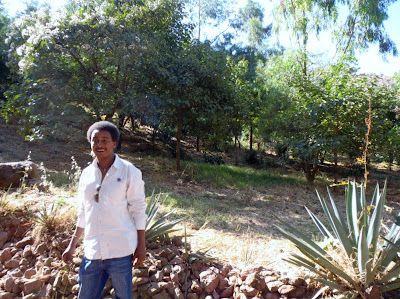 In the morning, mule ride, and trek to the top of Asheten Mariam Monastery, this is very famous for its 12-century monastery church and beautiful view at 10,298 ft above sea level. We will trek/mule ride through dramatic highland scenery and which eventually ends in a beautiful serene agricultural hamlet. After having lunch and rest at the hotel, we will continue our journey into Ethiopia’s long and marvelous past with a visit to other St. Lalibela’s remarkable churches-their architecture and artistry must be seen to be believed. Ones we finished visiting the second group of churches we will walk to the village through the complex bewildering labyrinth of underground tunnels to the monastery were the monks and nuns live. The rock-hewn churches that we will visit this afternoon include: Bete Gebriel, Bete Mercorios, Bete Amanuel, Bethlehem and Bete Aba Libanos.

Journal:   As indicated in the last post, we are digressing from the usual chronological flow to focus on our guide Yohanes. We might as well, as we again diverged from the itinerary. There was no mule ride and no trek to the Asheten Marian monastery, but we didn't feel like we missed anything at all.

In our past adventure travels we've been fortunate to find great guides to accompany and instruct us. Yohanes is no exception. There are many facets that make up a great guide. One of them is the unique ability to stand astride two cultures and not lose the connection to either one. The ability to be comfortable communicating and moving in the modern western world of the client tourist, while staying anchored and integrated in their culture of origin. In addition to touring the remarkable rock-hewn churches, over the two days in Lalibela, we enjoyed a number of experiences that were only possible because this is where Yohanes grew up and he chose to share some of that life with us. 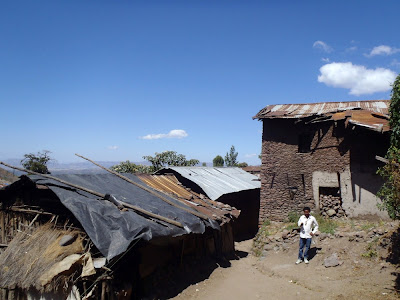 Yohanes is a great ambassador for Ethiopia. His pride and love for his country comes through everything he says. He is a deeply religious man, and like much of his country, his view of the world is shaped by his faith and the precepts of the Ethiopian Orthodox Church. 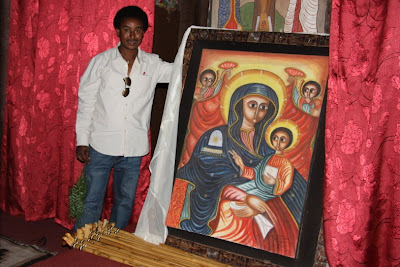 During the tour of one of the rock churches, he points with pride to an oil painting of the Madonna prominently displayed by the main altar. It is his work on permanent display. Turns out he is also an artist.

Yohanes grew up in a small village near the rock hewn churches. As we toured the site, we could hear children chanting/singing nearby. It was what Yohanes calls a “traditional school”.

In this school children are taught the stories, chants, and prayers of the Ethiopian Orthodox Church through rote memorization. This is where they begin to learn to read Ge-ez – the ancient liturgical language of the church. Yohanes informs us he was taught in just such a traditional school before attending a “Modern School”. 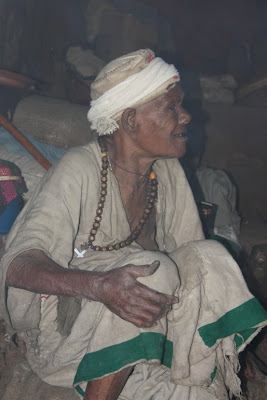 He takes us to meet his 82 year old grandmother, who continues to live the life she has always known, in her traditional home.

She is cooking injara on an open fire, and I sample some of her hot-off-the-stone injara with her hot pepper sauce and traditionally roasted coffee. 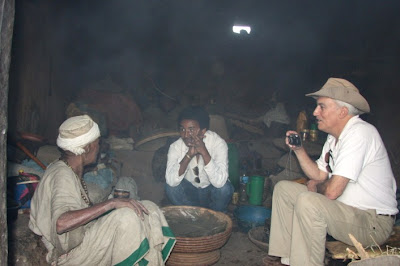 We also visit with the father of Yohanes girlfriend. She is from Laliebela and is studying to be a Pharmacist in Addis Ababa. 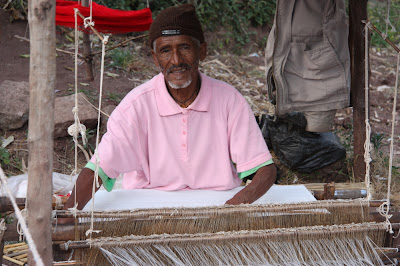 Her father is a weaver, demonstrating the traditional weaving skill on his outdoor loom and creating the fabrics for which the region is famous. Sigrid bought one of his scarves.

One of the themes of the trip was to try and discover the nature of the old book we purchased in Ouagadugou during our 2007 trip to West Africa. We already confirmed that it was indeed Ethiopian, and that it was written in Geez. Yohanes recognized that much when I showed him images of the pages on our Kindle. 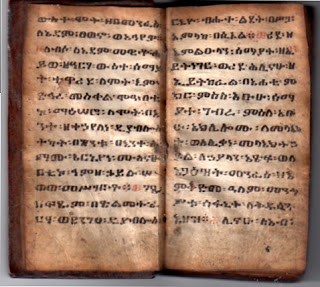 In Lalibela he introduces us to Mergeta Birhan – a religious scholar who grew up with Yohanes in his same village. 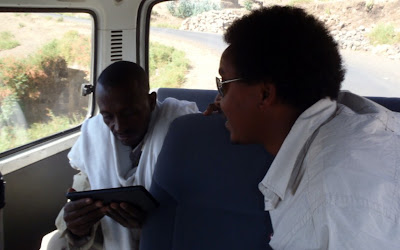 The hierarchy in the Ethiopian Orthodox Church is Deacon, Priest, Mergeta. Mergeta Birhan studied for 15 years in Gondar.

On the way to a monastery carved out of a limestone cliff, under a tree associated with the conversion of a Lalibela king, we set my Olympus point-and-shoot camera on a nearby rock and video the Mergeta reading the page images of our old Ethiopian book (video will be added in a future post). 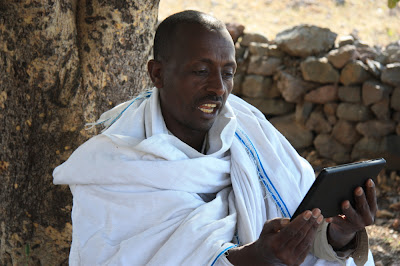 Yohanes translates as Birhan reads the page images on the Kindle and attempts to answer our questions about the likely purpose and origin of the book. 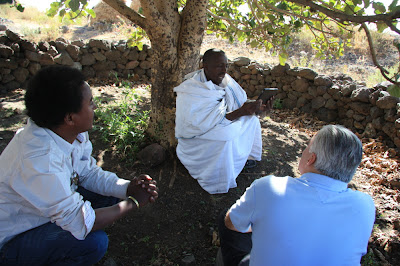 It was all a bit surreal – and wonderful.

That night we dined at Yohanes' mothers home. She was not in town, but the traditional Ethiopian meal prepared by his mother was served by his sister Zewditu. 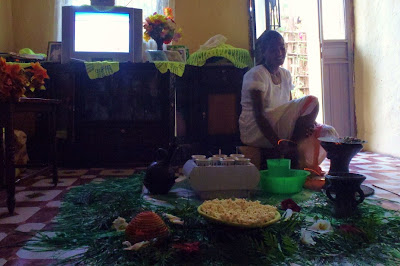 The vegetarian dishes were presented on fresh made injara, accompanied by traditional home brew and, of course,  a coffee ceremony. 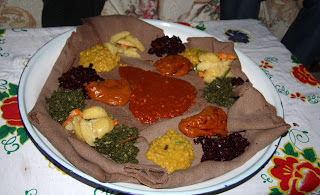 The traditional brew is fermented for 7 days and consumed. The drink is muddy and the color of rust. With limited experience in the brewer's art, I am guessing for my home brewer friends that this is the equivalent of drinking fabric filtered wort after an initial fermentation.

Neighborhood brewers coordinate the day that their brew is ready, so to minimize competition with each other. Monday and Tuesday are the days for Yohanes' mothers brew. She has a reputation in the neighborhood  for quality. Selling her brew to neighbors helped her support her six children as a single mom. 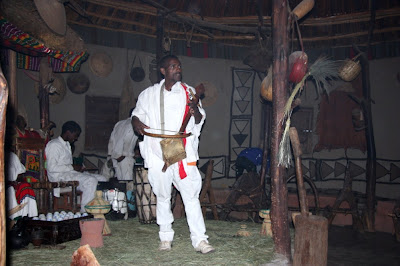 Finally we wrap up the day with a performance of traditional music and dance at a cultural center a short walk from his mother's home. 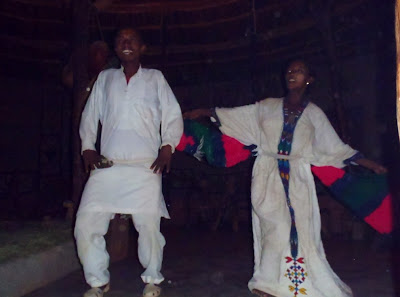 Yohanes calles it Ethiopian vodka. To me it tasted a lot like the Death's Door Wisconsin white whiskey I sampled last year... only... the areke was smoother and more agreeable. Put some of this in a oak barrel for 10 years, and a new category of premium whiskey could be born.  Distlling areke is a cottage industry all over Ethiopia. The best description I could find of the process was a graduate student thesis linked here [PDF].

The music was good, the young performers enthusiastic and energetic.  Sigrid and Yohanes both joined the festivities and danced. I drank the areke. None of the Sigrid dancing pictures were approved for publication.

We have no illusions about tourists like ourselves on a short visit ever truly immersing themselves or  understanding and appreciating another culture so completely foreign to our own.   But this day was probably as close as we could get in Ethiopia.  It was a special day.

Editiors Note: I intend to pre-load and schedule automated blog posts with the daily itinerary for our Ethiopian adventure. For those interested, this may be an easy way to follow along. Since we will not have internet access for most of the trip, my hope is this will make it easier to add some pics and journal commentary if and when we run across an internet connection. If there are no pics or commentary, you'll just have to wait until we get back. We'll see how it goes. UPDATED