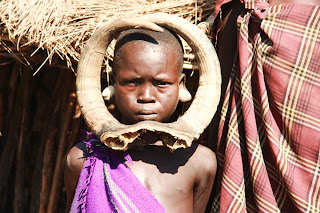 After having an early breakfast, we will drive from Jinka to Mursi Village. The Mursi, undoubtedly the most celebrated residents of South Omo are distinctive group of pastoralists. The Mursi are best known for their unique item of decoration, lip plates. Women of Mursi wear circular clay plate on their lower lip and the bigger a women can wear, the greater her value when she get married.

Journal:
Three items on the itinerary for today. We'll be driving through Mago National Park, visit the Mursi People, and after lunch at the lodge, the SORC Museum in Jinka. In a now familiar routine, the first stop is to pick up a mandatory Scout (armed Park Ranger) and a local guide.

The drive through the park was scenic, but not much in the way of wildlife spotting. No surprise there, we were told that increased truck traffic on the main road and poaching had degraded the wildlife population.

I had a different take. When we were on a wildlife safari at lodges in Southern Africa, or  Ranthanbore in India, we committed significant time and effort to wildlife spotting including: two or three drives per day; starting early and ending late; and accompanied by local guides expert in tracking and finding critters.  If we had simply spent an hour driving through those parks in the middle of the day we probably would not have seen much either.

We did see gazelle, dikdiks, and a variety of birds.We also saw elephant dropping along the road (they are hard to miss). Others who started earlier saw the elephants. The critters are out there. You just have to commit the time and effort to find them. 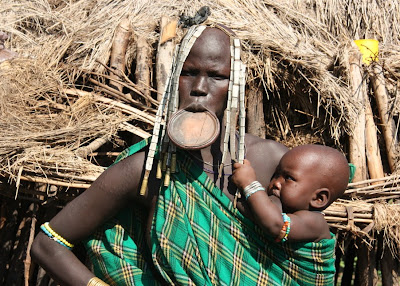 As noted in the itinerary, the Mursi are among the most distinctive and recognizable of the local peoples in the Omo Valley. This is primarily due to the striking body modification  favored by many Mursi women -  wearing large lip plates.  This makes visiting and photographing  the Mursi a primary objective for most tourists, and this has a predictable impact on the people who live here.  We were early to visit the village, but saw other Land Cruisers streaming in as we were leaving.  Tourist shooting pictures and villagers competing to be photographed for a fee is a daily event in this village. A lot of issues to think about in that dynamic, all of which are beyond the scope of this little blog.  For some additional perspective, the journal of a woman traveler who took a different approach is linked here, and a 2004 academic paper on the tourist / Mursi interaction is linked here [pdf]. 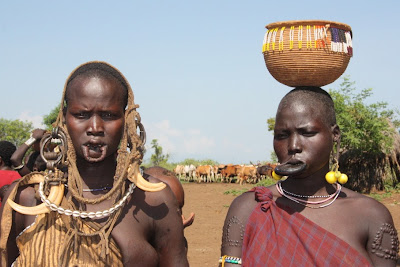 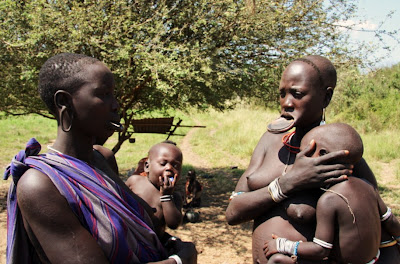 Beyond the lip plates, the next most noticeable element of the Mursi Village is the striking number of AK-47's shouldered by the men and women in the village. 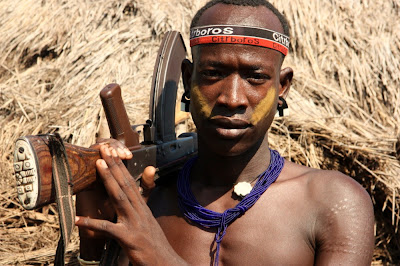 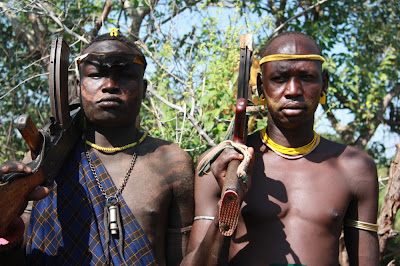 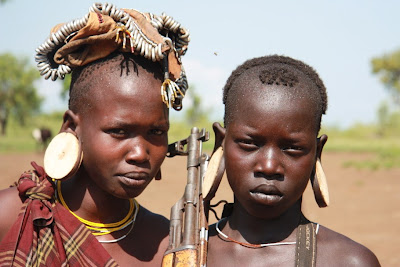 A quick google query on why we are seeing so many of  these guns yields a few possibilities:
South Omo Research Center: 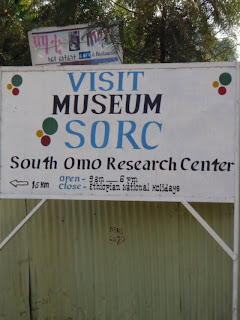 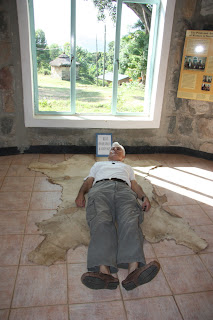 Many of my generation will probably recall  first reading and seeing pictures of Mursi in National Geographic and wondering about this strange body modifcation practice.  Of course, we cannot help but see the culture and mores of the Mursi, Hamar, and other peoples of the Omo Valley through the filter of our "first world" cultural values. By those standards some of their traditions are hard to accept, or even observe. This is not unique to western travelers. The Ethiopian government branded lip plates as "bad culture" and something to be discouraged. 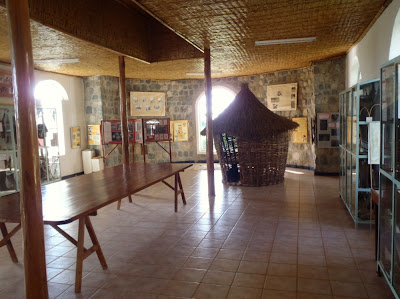 The South Omo Research Center Museum provides a real service giving by a voice a to these local cultures.

Among the excellent collection of artifacts in this small museum are text panels with quotes from the local people explaining what  their rituals and practices mean to them. It does not mean that women inviting whippings that raise bloody welts, or stick fights that maim, or extreme body modifications like lip plates will be any more comfortable or acceptable to Western eyes.  But at least the people who live this life are given this platform to speak for themselves and their culture.

Sago:  "The micere is also used during the initiation. Before I leap over the cattle my younger sisters will be whipped by the maz, the ones who have been already initiated. Each maz brings ten micere. My sisters are upset that I will be initiated and they say: 'I will be whipped by this maz until his micere have worn out. I will finish off all his whipping wands!' The maz only whips once with one micere, then he throws it away and takes the next one. She will wear them all off. That's the tradition connected with the initiate."


Editor's Note: I intend to pre-load and schedule automated blog posts with the daily itinerary for our Ethiopian adventure. For those interested, this may be an easy way to follow along. Since we will not have internet access for most of the trip, my hope is this will make it easier to add some pics and journal commentary if and when we run across an internet connection. If there are no pics or commentary, you'll just have to wait until we get back. We'll see how it goes. UPDATED

Wallacha? I knew there was something different about you, Mike.
Been so busy at work I haven't had time to follow your trip, so I took the week off to catch up. Eagerly awaiting further posts. So far the pictures are amazing.