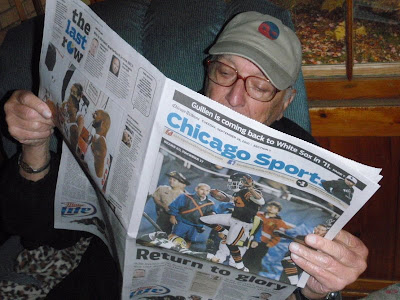 Kind of a cool fall morning. Perfect time for Dad and me to relax, enjoy a cup of java, and get caught up on the news with a few midwest newspapers. 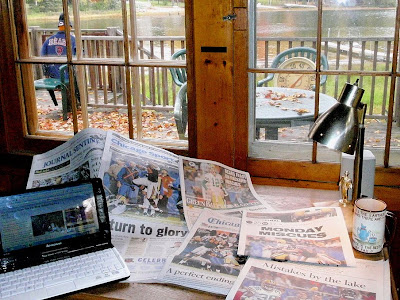 I can't recall such an enjoyable morning read since nephew Roy's 21st birthday in '07. One story dominates the news, of course, as the Bears continue to humiliate the dog-ass Packers - now winning 7 of the last 11 match-ups. I wonder how much longer the Packers will continue to be considered real competition for the Bears? They are just embarrassing themselves now. We could be witnessing the end of the most storied rivalry in the NFL. Of course, it is not too early to start talking Superbowl, but it may be a bit too early to speculate on whether this team can rival the 1985 Bears, generally accepted by knowledgeable football fans as the greatest team in the history of the NFL.

My favorite headline: The Bears Aren't Who We Thought They Were

"There are three undefeated teams in the NFL after week three. One has already taken down two Super Bowl contenders. This same team has played mostly without their starting left tackle, free safety and number two wide receiver. Yet, this group is treated like an aberration among NFL pundits. They're brushed off with a flick of the wrist like Christine O'Donnell in The New York Times newsroom. The Chicago Bears are 3-0. So why are they treated like they're the opposite? I'm not sure who the Bears have to beat this year to get some respect. The '72 Dolphins?

The root of this question is based on Chicago's week one performance. Facing the woeful Lions, the Bears blew chance after chance until Detroit's Calvin Johnson pulled in what looked like a go-ahead touchdown pass in the final seconds. The referees correctly ruled that Johnson "did not finish the process of the catch." As good as it looked, the touchdown was voided. This was certainly an ugly victory, but an old Al Davis quote summed up the Bear mentality following the game. "Just win, baby, win." It doesn't matter how you do it.

The Bears last two opponents, Dallas and Green Bay, were picked by most analysts to represent the NFC in the Super Bowl this year."