Well. This is annoying. 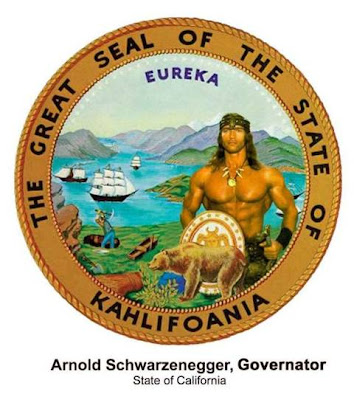 In the news today:

SACRAMENTO, Ca. – Golf course owners and some of their customers are teed off at Gov. Arnold Schwarzenegger. So are veterinarians, auto mechanics and amusement park operators. Their anger is directed at the Republican governor's proposal to extend the state sales tax to cover more services, an idea that has surfaced in other states as they race to plug crippling budget deficits. The Center on Budget and Policy Priorities, a research clearinghouse, predicts such deficits nationwide could reach $350 billion by 2011. In California, Schwarzenegger wants to help close a nearly $42 billion budget deficit by taxing rounds of golf, auto repairs, veterinary care, amusement park and sporting event admissions and appliance and furniture repairs.... Sean Grace, a home remodeling contractor from the Sacramento suburb of Elk Grove, said die-hard golfers will find a way to pay the tax if lawmakers approve it. "Ten percent is not too much," he said before slamming a long drive down the fifth fairway at Sacramento's Land Park golf course. "You've got guys paying $100 (for green fees). What's another $10? They're going to find it somewhere."

We've got a budget crisis in California. If the Governator can get a compromise and reduced spending out of the Democratic legislature by extending sales taxes to recreational activities like golf - so it goes.

I would be a lot happier if any of the money went back into fixing up local SF courses like Lincoln - but then - I'm a dreamer.