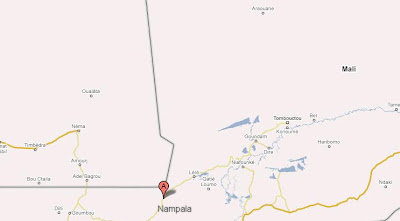 This article in the Chron caught our attention...

Mali rebels blamed in attack on base - 20 dead
"Suspected Tuareg rebels attacked an army outpost in the country's remote north Saturday, setting off a battle in which 20 people were killed, the Ministry of Defense said. The attack on the military base occurred in the town of Nampala, about 300 miles northeast of the capital, Bamako, the ministry said in a statement. The territory is the traditional homeland of Tuareg nomads who inhabit the vast desert that stretches across northern Africa.

The dead included nine security personnel and 11 assailants, with many more injured, said the statement, which was signed by Col. Idrissa Traore, deputy director of communication for Mali's defense ministry. He identified the attackers as "an armed gang linked to drug traffickers" - government code for Tuareg rebels.

Hours after the attack, the rebel Tuareg Alliance for Change of Northern Mali, known by its French acronym, ATNMC, posted a statement on its Web site claiming responsibility for the incident. Rebel spokesman Hama Ag Sid'Ahmed said in the statement the attack was intended to force the government into dialogue. "So that we can move beyond the current impasse which has lasted for the past three years, we want the Malian authorities ... (to reinitiate) a real dialogue," the rebel statement said.

Mali President Amadou Toumani Toure called for calm. "No one can divide Mali," he said.

There had been a Tuareg rebellion in the 1990s, followed by years of peace. Mali signed a peace deal with a number of Tuareg groups last year to end the insurgency, which had reignited in 2006. But one faction - led by Ibrahim Ag Bahanga, leader of the ATNMC - refused to sign the deal, saying it did not do enough to help the Tuareg minority, whose nomadic culture sets it apart from Mali's southern ethnic groups. Bahanga's group has been blamed for numerous attacks on military installations and for kidnapping soldiers and government security officers. In March, negotiators from Bahanga's group and the government started meeting in the Libyan capital of Tripoli."

The map at the top of the post shows the proximity of the Taureg attack to the locations we visited on our West Africa tour last year, including Niafounke, Araouane, and Timbuktu. This looks to be about 300 klicks from our desert camp (as the camel walks). Seems a safe distance from the trouble, but I guess in retrospect it was a good idea to pay for the armed Taureg escort while we were in the desert after all.
Posted by mw at 8:24 PM