How do you catch a 56" Northern Pike? - UPDATED & DEBUNKED 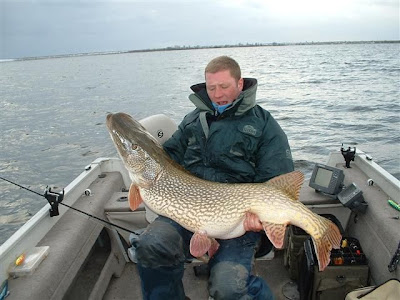 I got an e-mail from a friend with these pictures. Apparently this e-mail has been circulating for a couple of years, as I was able to google several blog posts with the same story. This may be a world record pike caught on a hook and line at 56 inches, 55 pounds, caught on Rainy Lake in Ontario. It may also be complete BS. 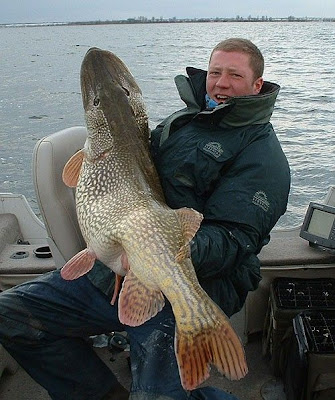 In any case, I had not seen this before, and if true, the amazing thing is how the fish was caught.

Which goes to the question in the title... 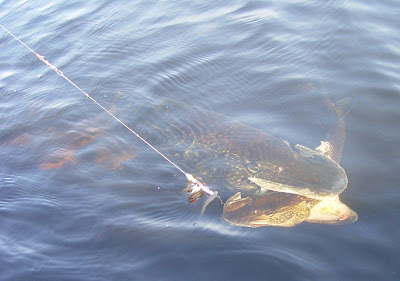 You catch a 56" pike, by trolling with a 36" pike.
Apparently the angler caught the 36" pike, a trophy in its own right, and while reeling it in - the monster pike tried to eat it and would not let go. He netted them both.

UPDATE 10-June-09:
I note that this post continues to get hit on google searches for "56" pikes", so I guess the e-mail that was my source is still actively circulating on the intertubes. I decided to update this with the most recent information I have learned to save time for any who were as curious about this story as I was.

The e-mail shows two different fish. The last picture of the big pike grabbing the small pike has nothing to do with the pictures that go before. I don't know the source of the last picture.

The first two pictures are legitimate, documenting a fish caught by Ewout Blom in an unnamed lake in the Netherlands at the end of 2004. The story is documented in article by the fisherman in the picture linked here, and orginally published in 2007. According to the fisherman, the actual size of this pike is 127 cm (50") and 19.5 kg (42.9 lbs). A big fish by any standards, but not what is claimed in the e-mail.

Hat tip to the boys at the Alberta Outdoorsman Forum for ferreting out the real story.
Posted by mw at 7:04 PM