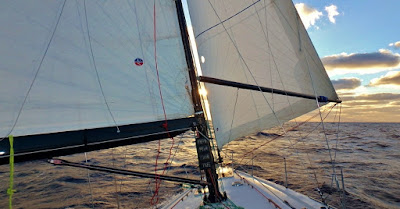 Miles Traveled:498
Miles To Go (to Antigua): 2,190
Heading: 260
Average Speed: 10 knots heeling to Port on a Starboard tack
Fastest Ride so Far: Kim with 15.3 knots on Nov 23 beating her own record
Butter Indicator: Not Melted 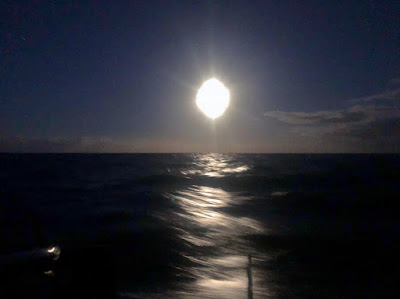 Full moon on the night watch was spectacular. Captain Jim caught the moon setting and sun rising on his watch. 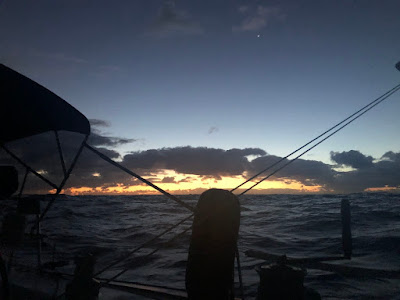 Weather is beautiful. Sunscreen on but not too hot. Sunshine, puffy clouds, and big blue rolling swells. On my 5 AM watch, I saw another vessel for the first time since leaving Tenerife. A cargo ship passed about 2 miles behind us and on a heading parallel but more southerly than ours. It's lights were visible most of my watch.

The sail reefs were let back out to catch as much breeze as we can, and the path of least resistance has us sailing almost due west. As a consequence, that butter may never melt (see previous post). In an effort to have both a happy boat and a boat sailing in a more southerly direction, Jim reconfigured the Main and Jib in a "Wing and Wing" configuration. Doug, who is almost as old as me, and (unlike me) has been sailing his entire life, says the last time he saw this configuration was at the "Ray Wallace School of Sailing" when he was eight years old. 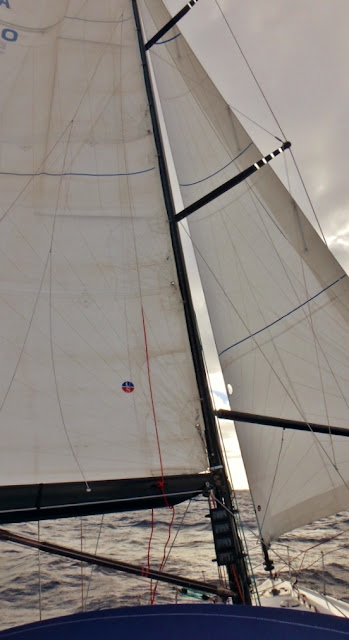 We set up our fishing rig and are currently dragging a cedar plug about 35 meters behind the boat. 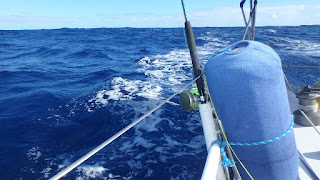 I'd like to stress that today was a fishing gear setup and familiarization day. It was not our intent to to catch fish today and, so far, our plan is working out perfectly. I may also plan on not catching fish tomorrow with a deeper diving rapala lure. 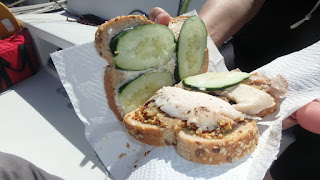 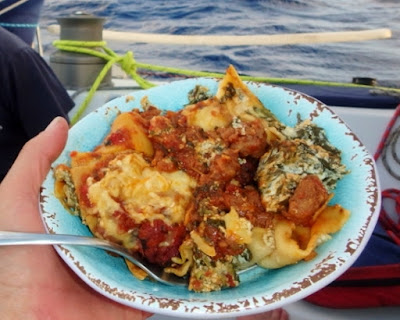 Imagine if you will a photo of the sun and orange lined clouds peeking between the "Wing and Wing" as we sail into the setting sun. Someday you will see that photograph posted here. [UPDATE: Photos at top of post and below.] 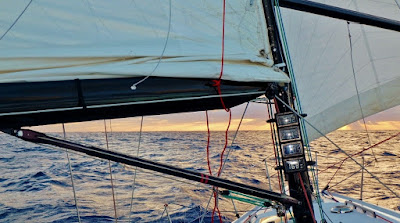 Happy Thanksgiving and good luck on the journey.
Greg