We'll be departing from the Santa Cruz Marina in Tenerife. We'll be following the in the footsteps of Christopher Columbus and..

... as Captain Jim notes in his blog, we even have a full-size replica of the Santa Maria at a nearby berth. 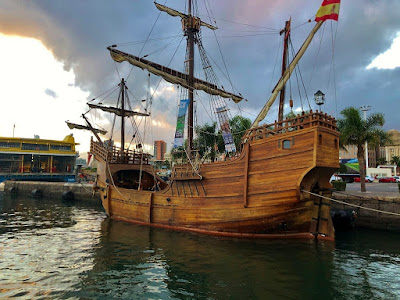 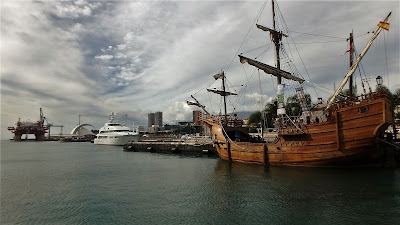 It's a busy marina in a modern Spanish metropolis where we can find everything we might need for the passage across the pond. But there are no marinas, repair shops, or grocery stores between Tenerife and Antigua, so we've got to get this right. 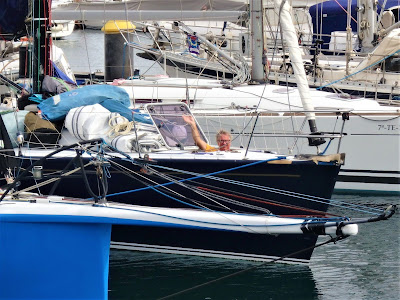 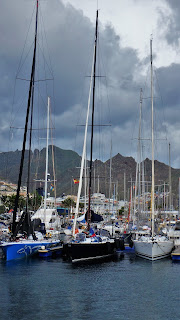 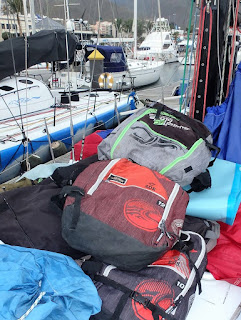 Making sure the boat is properly packed, prepared and provisioned for a crew of five expecting a two to three week passage of open ocean sailing is a big job. 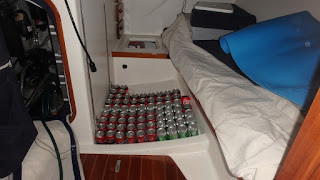 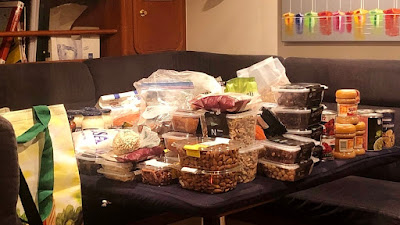 Although never easy, it's old hat for Captain Jim and First Mate Deb. Deb described her plan and thinking in the Morpheus Sailing Blog: 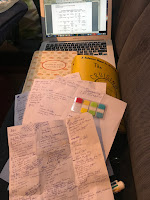 "I know what I’m serving for each meal. I know which meals I’m pre-cooking and freezing in the Air B&B each day. I have my shopping list sorted for each day. I woke up this morning dreaming about all the little things I need to do and figure out… “Don’t forget the garlic press. Do I have enough oatmeal? Does anyone take sugar in their coffee?” What am I forgetting? ...
Other favorites will be appearing, like Tory Kane’s Tex Hash, Paula Tye’s awesome lasagna, and Jane Taylor’s Chicken Jambalaya. All easy 1 pot meals that freeze well. There’s also flexibility in the menu so if Mike W. catches a fish we can have sushi, but it would be best if Huey Nah were with us!"

As I outlined in a later FB post, the assembled crew is pitching in, although some provide more help than others ...


"We" are doing a lot of cooking in preparation for the trip... 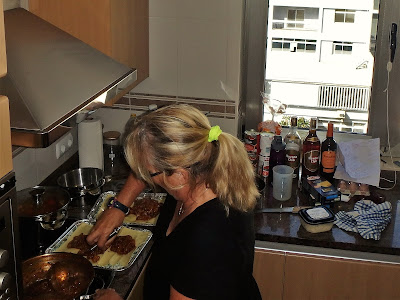 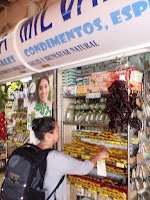 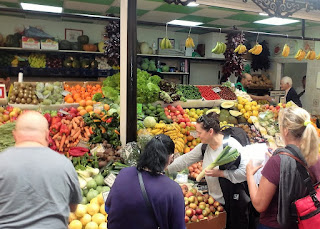 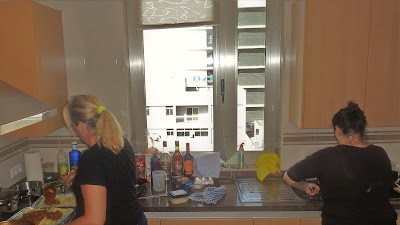 As anticipation of our departure draws near, it's inevitable to feel a mixed sense of excitement and trepidation at the adventure ahead. There is always something to be nervous about with a journey like this. As I said after our last passage when we learned of unfortunate mishaps by other boats making the same crossing:


"The reality is that a journey of this nature requires a properly equipped and well maintained boat you can trust as well as a captain that knows the boat intimately and makes right decisions. With that, you may not need good luck, but you still need to avoid bad luck.  It also helps to have a guardian angel like Gibb obsessing over waves weather and wind conditions with continuous updates via sail mail."

Nervous Thing Number One - Not Enough Wind
Gibb, our Weather Guardian Angel is again looking over our shoulder this passage and... 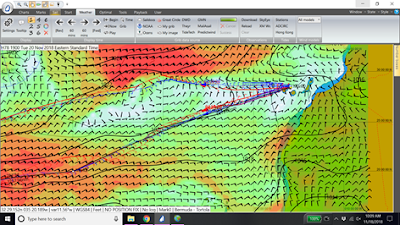 ... he has some concerns, about the very light winds forecast for our departure date, prompting Captain Jim to consider a longer and more southerly route:


Well, this makes me think a bit.  According to the analysis done by my friend Gibb, we will arrive in Antigua at the same time regardless of whether we leave on the 19th, 20th, or 21st.

The case for a one day delay or a detour to Cape Verde islands is getting stronger.  Cape Verde adds aprox. 300-400 miles to the trip so call that an extra 2 days travel time plus any time we would stay on the island beyond getting fuel. Thoughts…  - Jim

Nervous Thing Number Two - Too Much Water (Big Waves)
So while we are on the Southeast side of the island... 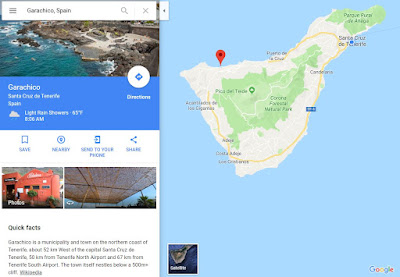 ... this is happening on the Northwest side of the island in Guarachico:


Nervous Thing Number Three - Mummification at the Nav Station
For reasons that I cannot explain, over lunch, Doug decided to relate a story he read about a sailboat lost for years found floating with the Captain mummified at his station. I called bullshit and checked with the Google Machine. Turns out it actually happened: 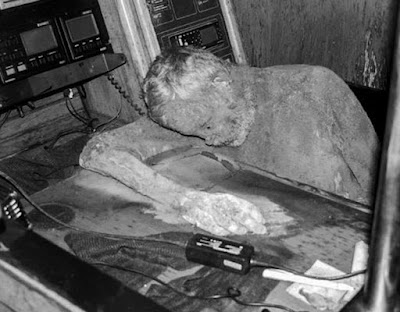 Mummified captain found in 'ghost ship' he sailed in for seven years after death
"A MUMMIFIED captain was found in a mystery boat drifting 40 miles from the shore...still sat in the seat where he is believed to have died... The grey corpse, which was preserved by dry ocean winds, hot temperatures and the salty air, still sat at a desk near radio equipment on the 40 ft yacht called Sayo, which was partially submerged... It is not year clear when he died, but no one has reported seeing him since 2009." 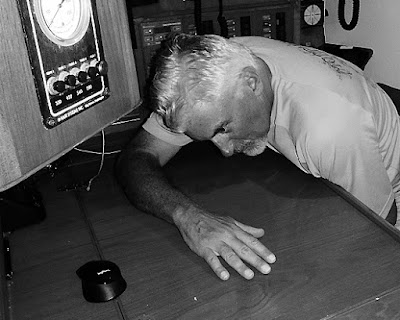