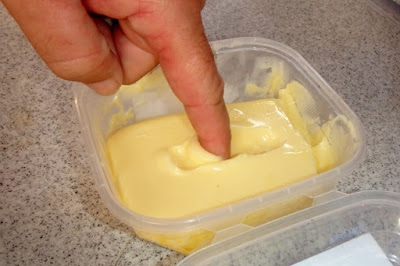 Jim: "The butter has melted!"
Deb: "That is soft butter, not melted butter."
Kim: "Not melted yet. No puddle."

Thought of the Day:
Sailing:
Today we have blue skies, puffy clouds, and a consistent easy following wind. Not going very fast, but it's smooth comfortable sailing in the right direction, and no need for any sail adjustments all day (so far). We're on a port gybe with the Wing and Wing configuration, mainsail starboard, jib port. Jim says we may be on this gybe for days. He says that everyday. 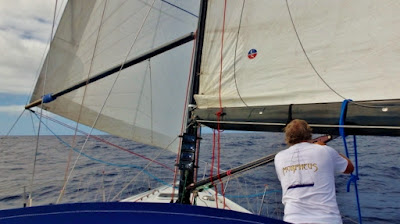 It is such smooth sailing that everyone slept late and there is very little activity to report. However, it is smooth sailing today because there was a lot of activity last night. On Doug's watch, in a squall, in light winds, at some point, Morpheus was sailing backwards, confusing Otto, and requiring running the motor to get him reoriented. We were sailing again by the time of my watch, but we were apparently sailing to Nova Scotia instead of Antigua. So Jim, Deb, and I gybed and redeployed the jib in the dark while sleep deprived. It went off like clockwork.

On Jim's watch there was a private showing of the Matrix projected on the mainsail.


Private because apparently no else was invited. I was aware of it because I thought I was dreaming, but I actually heard Morpheus (movie character not boat) explaining the Matrix to Neo. Kim caught the end of of the movie on her watch, at which point the wind died, so they rolled in the jib and started motoring. By the time of my morning watch we were sailing again.

Fishing:
Due to our port gybe, the mainsail sheet extends across the spot where we mount the fishing rod and reel. So... no rod and reel deployed. Jim did get the handline deployed with a red squid lure. I don't want to believe that Jim selected this tack specifically to keep me from using the rod and reel, but ... I just don't know.

BREAKING: The sailing was so smooth that the Officer Corp authorized a cocktail hour and distributed beers. As we were enjoying the beer, a four foot dorado hit the handline. 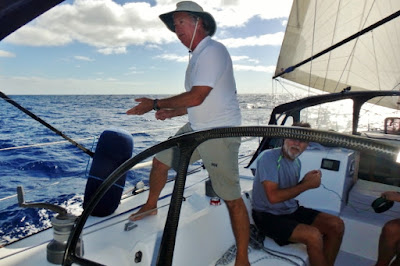 Jim's catch, but a real team effort bringing it in. Having experienced some difficulty in the past getting a hooked fish on the boat, we decided to not rush it. The fish was hooked well enough to drag it behind the boat until exhausted. 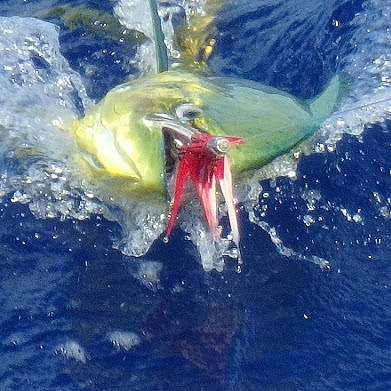 I then climbed down on the transom and grabbed it under the gills hauling it on to the boat. 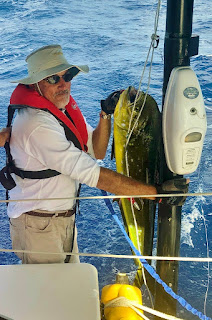 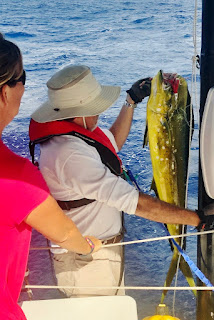 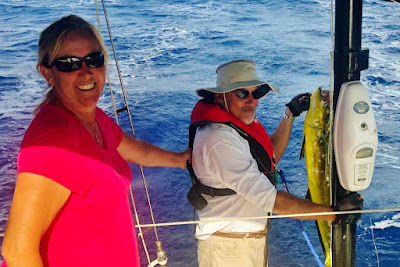 We put a stringer on it, and with a few judicious cuts put it back in the ocean to bleed out. Finally, still standing on the transom, we decided to fillet the beast on top of the Yeti cooler. 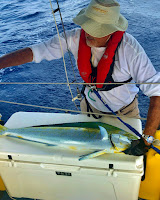 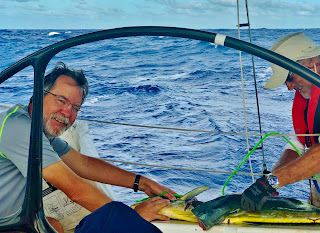 With the rest of the crew finding me tools, ensuring I was safely secured, taking photographs, and washing the back of the boat with a sprayer to keep effluvia flowing backward, we managed to hack some good size fillets out of the catch. Jim also helped by shouting encouragement from below deck.

Dinner was already underway, so half the fillets went into the freezer and half into the fridge. We'll be eating fish the next couple of nights. [Ed. Note: A fishing video will be posted here in the fullness of time]. 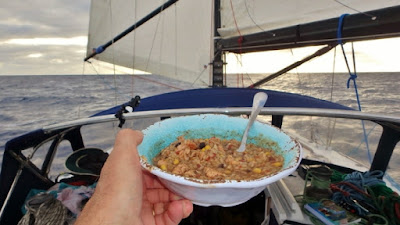 With everyone sleeping late, breakfast was catch as catch can. I enjoyed Deb's Homemade Ginger Bread with a smear of soft butter. Lunch was ham and cheese wraps. Chicken Chili with Ratatouie for dinner. As I feared, I am gaining weight on this passage. - mw


++++++++
My intent is to cross-post daily logs to MW Mobile Blog and Jim & Deb's Morpheus Sailing Blog from SailMail while en-route. Due to the technology limitations, these will be short, text-only posts. I'll backfill pictures and video once I am home again. Eventually.

PostScript - All on-board have an opportunity to add comments here on the bottom of post prior to transmission if they so desire:

very impressed by the fish story, safe travels to you all. might be game for a caribbean visit once you're "settled".